Justice Minister Doug Schweitzer deflected questions Tuesday about his decision to effectively appoint a political supporter to a $290,000 position as commissioner of the public inquiry into alleged foreign-funded attacks on Alberta’s energy industry.

Justice Minister Doug Schweitzer deflected questions Tuesday about his decision to effectively appoint a political supporter to a $290,000 position as commissioner of the public inquiry into alleged foreign-funded attacks on Alberta's energy industry.

Earlier Tuesday, CBC News revealed that public inquiry commissioner Steve Allan campaigned for Schweitzer in 2018, organizing along with two other business associates a country-club event to support Schweitzer as he sought the United Conservative Party nomination.

Internal emails also reveal Allan urged several dozen contacts to vote for Schweitzer in the 2019 provincial election, in part because "if the UCP wins, there is an excellent chance Doug will be in cabinet." 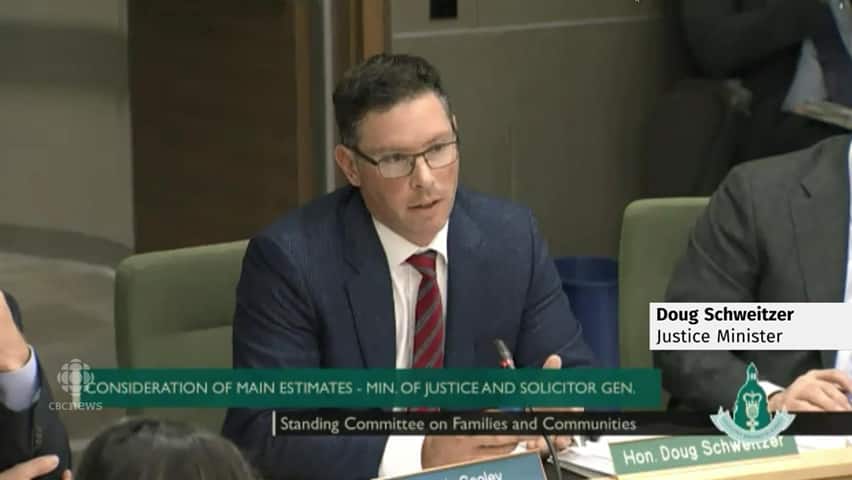 11 months ago
1:56
At a committee meeting, Schweitzer deflected questions about appointment process, and portrayed Allan as the victim of a smear campaign. 1:56

At a legislative committee meeting Tuesday, Opposition NDP MLAs attempted to grill Schweitzer about the appropriateness of his decision to recommend Allan for commissioner of the $2.5-million Public Inquiry Into Funding Of Anti-Alberta Energy Campaigns.

'Dragged through the mud'

But Schweitzer ignored most questions, and instead attempted to portray Allan as a committed community volunteer who has become the victim of a politically motivated smear campaign.

"How (Allan) has been dragged through the mud over the last few weeks is appalling, and the fact that the NDP lines of attack on this is the same as Ecojustice is appalling, absolutely appalling," Schweitzer said.

But NDP ethics critic Heather Sweet told Schweitzer she and her party were clearly not attacking Allan's credentials.

Instead, Sweet said the NDP were doing their job as the opposition by asking legitimate questions about the expenditure of $2.5 million of the public's money, and about whether Schweitzer's ministry did its "due diligence around a conflict of interest."

Allan is already under intense public scrutiny following a recent CBC News investigation that revealed he personally awarded a $905,000 sole-source contract to Dentons law firm in Calgary, where his son Toby is a partner. Schweitzer was also a partner at Dentons before his election but he said he severed his relationship shortly after his election.

Allan was appointed, on Schweitzer's recommendation, as the inquiry's commissioner through a July 4 order-in-council.

Emails obtained by CBC News detail campaigning by Allan and two of his longtime business associates — Bob Taylor and Quincy Smith — on behalf of Schweitzer.

The three men wrote an invitation to attend a reception for Schweitzer on June 19, 2018 at the Calgary Golf and Country Club. The email was forwarded to several dozen contacts by Schweitzer's assistant at Dentons, using the firm's email. One of the email recipients was Allan's son Toby.

Under the subject, "Invitation from Steve Allan, Quincy Smith and Bob Taylor," the email states "we are supporting Doug Schweitzer as he seeks the Calgary-Elbow nomination for the United Conservative Party."

Smith is a senior partner at Dentons Calgary in its insolvency and bankruptcy division, where Schweitzer was also a partner. Another senior Dentons partner, Bill DeJong, provided an endorsement for Schweitzer that he posted on Schweitzer's Facebook campaign page.

Taylor is Allan's former business partner in Richter, Allan & Taylor, a Calgary insolvency accounting firm. The firm did significant business with Dentons through Smith, a source familiar with the industry told CBC News. Allan has also said he had extensive business dealings with Dentons.

Since 2016, Taylor has been a partner with Deloitte in Calgary. Allan also retained Deloitte to work with the public inquiry. Alberta Energy, which administered the inquiry contracts on Allan's behalf, has not disclosed how much the Deloitte contract is worth.

In a response letter yesterday, Sprague said there would be no investigation because he had determined there was no conflict of interest, and that Allan's son would not receive a "significant financially benefit" from the contract. Sprague said Allan's son will not have any involvement in the file.

On Tuesday, CBC News asked the ministry if Sprague would reconsider his decision based on the new information about Allan campaigning for Schweitzer. A ministry spokesperson said Sprague had nothing further to add to the response it provided Sweet. The ministry did, as requested, explain why Sprague thought there was no conflict of interest.

Duff Conacher, co-founder of Democracy Watch, said Schweitzer and Allan both had conflicts of interest and Allan should be fired.

Outside the committee, Sweet told reporters she was disappointed by Schweitzer's refusal to answer questions, saying the NDP wanted him to "clear the air with Albertans."

But she said his non-answers were telling.

"There is something happening within this conversation that they clearly do not want Albertans to know about," Sweet said.