People with epilepsy are worried that two epilepsy sufferers were arrested and criminally charged.

Should people suffering from seizures and their aftermath be held criminally responsible for prohibited acts?

Two men, two arrests and one controversy: Should people suffering from seizures and their aftermath be held criminally responsible for prohibited acts?

It's a question that has resonated in Alberta this week after two epilepsy sufferers were arrested and criminally charged for acts they say occurred while in medical distress.

The arrests have inflamed worry among some in the roughly 300,000-strong community of people with epilepsy in Canada. The group already reports feeling marginalized and say what happened is further proof their disorder is an affliction many have, but few understand.

As CBC News reported this week, in one case a man named Neil Ryley said his family called 911 asking for an ambulance when he showed violent symptoms from a seizure. He claims several officers arrived alone and beat him. 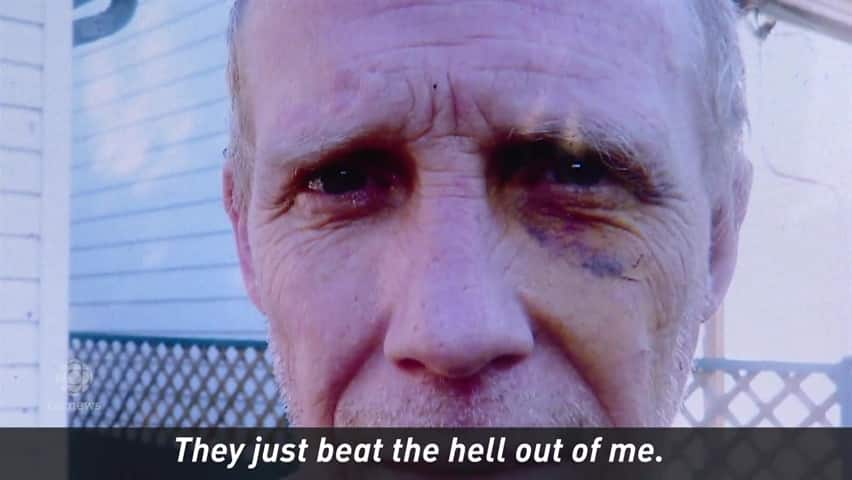 Neil Ryley, who has epilepsy, claims police beat him up

4 years ago
1:11
Neil Ryley says police beat him severely in his home then arrested him after his ex-wife called 911 for help with violent symptoms from a seizure. 1:11

A police spokesperson would not address the alleged beating, but said Ryley head-butted an officer, breaking his nose. In the other case, a man with epilepsy who does not want to be identified in the media was allegedly running naked near a school during or shortly after a seizure. Officers tasered then arrested him.

Dana Himer, 47, has been talking about the arrests for days with her contacts on several epilepsy Facebook sites.

Himer herself has been having recurring seizures since she was two years old. Epilepsy affects approximately one in 100 Canadians and is typically diagnosed when a person has had two or more seizures.

A seizure is a disruption in normal brain activity that interferes with brain function. According to the Edmonton Epilepsy Association, there are 44 known types of epileptic seizures. Some are "absence" seizures, where a person appears awake but has a blank stare like they are day dreaming. Others drop on the ground and convulse. During and afterward, some people may hallucinate, act disoriented and defensive, or lash out.

'Should I bother' calling for help?

Medication has controlled most of Himer's symptoms in the past. But lately her seizures seem to be getting worse. A few weeks ago, she came out of seizure state to find herself shirtless. Her feet were bleeding from broken glass in her kitchen and the door to her house was wide open.

Because of the severity of her condition, she has a Lifeline medical alert necklace that calls for help. But she said the recent cases in Edmonton make her wonder if it's worth it.

"It makes me think, should I bother?" she said. "I feel like people just don't listen to what we have to say."

In 2011, a national survey of 671 Canadians with epilepsy found more than half reported a lack of independence in daily life as their biggest challenge. Only four per cent said their medication allowed them to be completely seizure-free.

I've seen many times that they've pushed people away and they're belligerent.- Dr. Elout Starreveld, neurologist

Those who lived in Western Canada were more likely to pay out-of-pocket for that medication. Western residents were also least likely to have seen a neuropsychologist specialist (12 per cent, compared to 21 per cent in Ontario and 23 per cent in Quebec).

These are factors a leading Canadian neurologist says public servants, like police, should be aware of when dealing with epilepsy cases.

"Police officers should put a little more thought into the case before they start acting physically. They tend to overreact," said retired specialist Dr. Elout Starreveld.

He explained the "abnormal" mental state a person experiences after a seizure, which can last up to two hours.

"I've seen many times that they've pushed people away and they're belligerent," he said. "Usually you can calm them down and minimal restraints are necessary."

In fact, a basic First Aid booklet posted online by Epilepsy Ontario specifically gives the direction: "do not restrain the person" who is experiencing a partial or full seizure.

Edmonton police chief Rod Knecht implied in comments to the media on Thursday that officers who responded to the two epilepsy cases may not have known the men were experiencing seizures or seizure symptoms.

Neil Ryley's partner Tracey Schimpf said she told the 911 dispatcher that she needed medical help and asked for an ambulance. She said she also heard Ryley tell officers when they arrived that he had epilepsy and seizures.

'It really is a classic law school exam kind of question'

The Edmonton Police Association backs the officers involved, explaining police cannot be expected to diagnose every person who may have a medical condition.

But a law professor with the University of Calgary explained the question of whether the assault charges will stick actually has little to do with the officers' actions — and hinges instead on the nature of epilepsy.

"It's actually a very basic concept of criminal law," said Lisa Silver. "It is really a classic law school exam kind of question."

For a person to be found criminally responsible for a crime, courts look at two elements: intent and the presence of a prohibited act.

"In a case of someone who has epilepsy it can be argued that they don't even have the voluntariness that is required for the prohibited act part of an offence," she said.

"They don't have any control over the conduct. Therefore they really didn't make a choice to commit this offence."

She compared it to sleepwalking, which has actually acted as a defence against murder charges in more than one high-profile case — where the accused admitted to killing someone but were not found criminally responsible.

'This is something that maybe a Crown should be taking a hard look at and would and maybe pull [the charges] if it truly is a case of epilepsy where the guy really didn't have control," Silver said.

"If he takes medication but it doesn't control them all the time, I can't see the Crown pursuing it."

CBC has a copy of a letter from one of Ryley's doctors, that says he is scheduled for a type of brain testing considered to be one of the first steps toward potential surgery.  According to the Canadian League Against Epilepsy website, brain surgery is "only performed if all other treatments fail to adequately control seizures."

"If someone can't control their conduct, then it really is a core principle that they shouldn't be responsible for it," said Silver.

Himer and others who have criticized these arrests would likely argue that living with epilepsy — and the stigma around it — is already punishment enough.

If you have information on this story, or others like it please email, in confidence: marion.warnica@cbc.ca