Jim Prentice is meeting with Alberta Premier Dave Hancock this morning to begin his transition into the province's top political job. 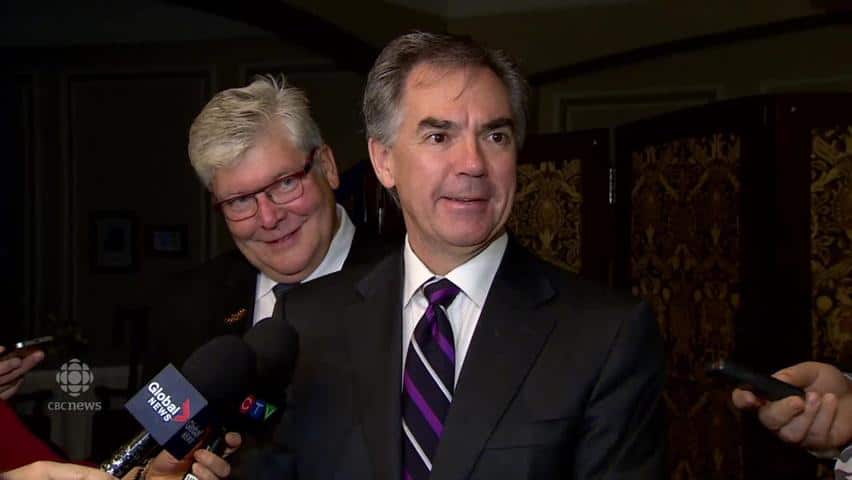 6 years ago
9:15
The premier-designate meets with Alberta premier Dave Hancock 9:15

Jim Prentice met with Alberta Premier Dave Hancock in Edmonton this morning to begin his transition into the province's top political job.

Prentice, a former federal Conservative MP and cabinet minister, won 77 per cent of the votes cast on the first ballot during the weekend Alberta Progressive Conservative leadership convention.

Speaking to reporters on his way into Government House, Prentice said that he could be sworn in as Alberta's 16th premier as early as next Monday.

Prentice is expecting to have a much smaller cabinet than former premier Alison Redford, with about 20 ministers. He said that the names would be revealed the day that he is sworn in.

Prentice said he would speak to each PC MLA before the new ministers are announced. He also did not rule out the idea of appointing unelected people to the cabinet.

“I'm giving full consideration to all of the alternatives, to having a cabinet that can deliver on the priorities that I spoke about during the course of the campaign," he said.

Prentice now needs to get elected to the Alberta legislature. The next session starts on Oct. 27, which means a byelection would have to be called this week.

However, the timing could be altered if the government decides to deliver a throne speech.

"We are looking at all of the alternatives," he said. "A throne speech certainly is one of them that will have implications in terms of when the legislative assembly would start.”

On Sunday, Prentice got down to business by announcing his five-member transition team, which includes Environment and Sustainable Resource Minister Robin Campbell and former Edmonton mayor Stephen Mandel, who may be tapped for the new cabinet.

"You know how highly I think of him and would love to have him on our team," Prentice said.

Prentice also met with Thomas Lukaszuk and Ric McIver, his opponents in the leadership race.

Although party members complained about problems with the new electronic voting system, both Lukaszuk and McIver said they will not contest the results.