The first shipment of the Moderna vaccine arrived in Alberta on Tuesday and will be given as soon as possible to residents and staff in long-term care centres, Premier Jason Kenney says.

The first shipment of the Moderna COVID-19 vaccine arrived in Alberta on Tuesday and will be given as soon as possible to residents and staff in long-term care centres, Premier Jason Kenney says.

The initial 16,900 doses of the vaccine will be sent to long-term care facilities in Edmonton, Calgary, Medicine Hat, Lethbridge, Grande Prairie, St. Paul and Fort Saskatchewan, Kenney said Tuesday at a news conference.

Immunization of residents in continuing care facilities will begin on Wednesday.

The Moderna doses will be offered to residents at six congregate living facilities on First Nations reserves, the province said in a news release.

The provincial vaccine depot will also receive vaccine for further distribution to rural and remote communities.

"The arrival of the vaccine does not mean the pandemic is over," Kenney said. 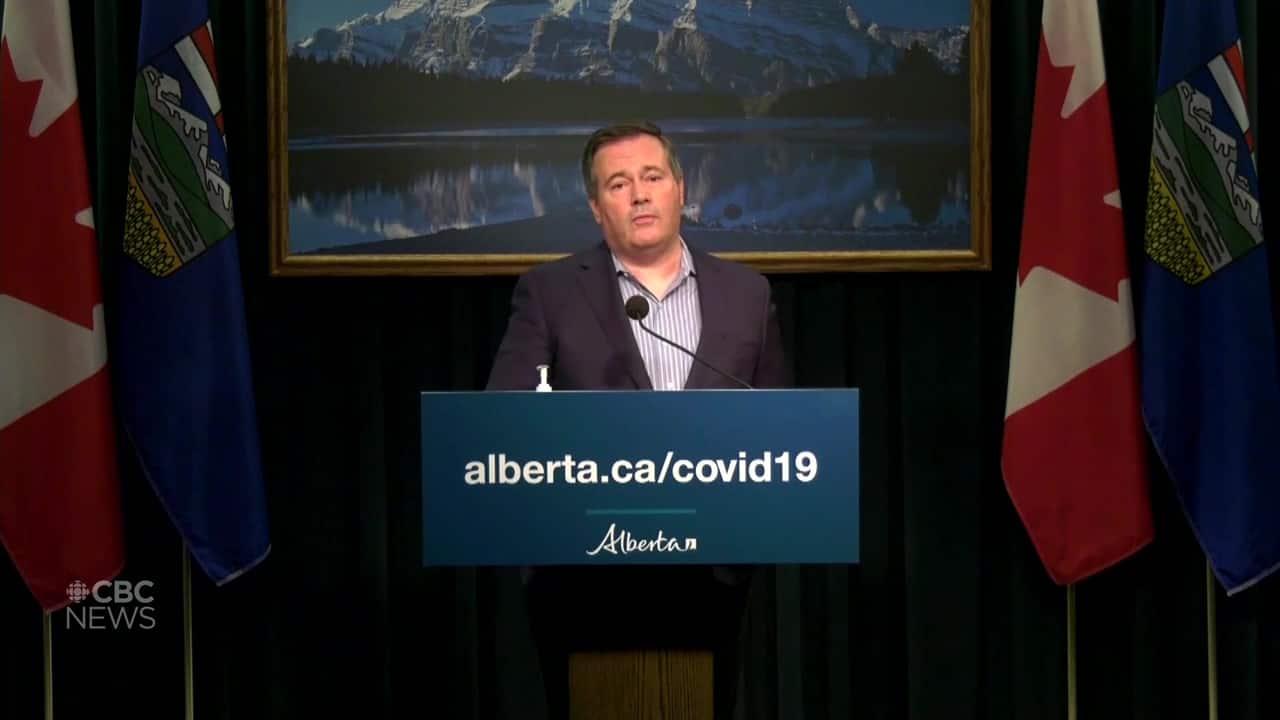 26 days agoVideo
2:02
The first shipment of the Moderna vaccine arrived in Alberta on Tuesday and will be given as soon as possible to residents and staff in long-term care centres, Premier Jason Kenney says. 2:02

"While we have seen progress as the number of active cases has come down by nearly one-third over the past three weeks, there is still so much more to do, as we can see with 890 Albertans in hospital as a result of COVID-19."

The Moderna vaccine, which can be stored at relatively moderate temperatures, can more easily be transported to long-term care centres, making it ideal for immunizing vulnerable populations, Kenney said.

The Pfizer-BioNTech vaccine, on the other hand, must be stored at ultra-cold temperatures of about -80 C, which makes transporting the vaccine to any off-site locations challenging.

"We are now in a position to be able to immunize residents in their facilities," Health Minister Tyler Shandro said at the news conference.

Bringing the Moderna vaccine into the care centres will make it easier to slow or stop the spread of the illness, he said.

On Tuesday, the premier announced that Alberta has 14,785 active cases of the illness, a number that has been slowly declining for more than a week.

Across Alberta, 26 more deaths and 872 new cases were reported on Tuesday.

The brings the death toll to 1,028 since the pandemic began in March.

A total of 890 patients are being treated in Alberta hospitals for the illness, including 153 in ICU beds.

Hospitals in the Edmonton zone are treating 499 patients, including 85 who are in intensive care.

The province seems likely to pass another milestone soon; Alberta has now seen 99,141 total cases since the pandemic began in early March.

At a news conference two weeks ago, Shandro said Alberta planned to administer first doses of the Pfizer-BioNTech vaccine to 29,000 health-care workers by the end of this month. That vaccine requires two doses to be effective.

Kenney said Tuesday the province will not meet that goal, because AHS initially held back half the vaccines so the first people immunized could be given second doses.

Cabinet has since directed AHS to move forward with as many vaccines as possible and count on future large shipments in order to administer those second doses.

"My understanding is that we are scheduled to do about 4,000 additional vaccines in the next couple of days, two or three days," Kenney said.

"We've also directed AHS to schedule as many as they can as well on New Year's Day, which had not originally been the plan. And so we hope to start catching up toward that goal."

Tuesday's numbers follow a batch of new data that was released on Monday, showing that 112 people died from the illness over a five-day period from Dec. 23 to Dec. 27.

During that same five-day period, Alberta reported a total of 4,488 new cases.

As more shipments of both vaccines arrive in early January, the province said, immunization will focus on residents of long-term care and designated supportive living facilities, followed by seniors aged 75 and over and on First Nations reserve communities and Métis settlements.

Phase 2 is still expected to start by April 2021. Final decisions about who will be immunized in that phase have not yet been determined, the news release said.

"Phase 3 will involve rolling out vaccinations to the general Alberta population, and is anticipated to start later in 2021."

"It's clear this government is unable to manage this pandemic response and they will try to blame everyone but themselves," Shepherd said in a statement. "They've lost the trust of Albertans at the worst possible time — and at a time when the vast majority of Albertans are doing their part to slow the spread of COVID-19."

"Inevitably, there will have been at least some degree of socializing here in Alberta that could affect our numbers that we might see pop up in a couple of weeks," he said.

"It's very clear that the fall spike here ... started with Thanksgiving. If you look at where that really started to pick up, it was almost exactly 14 to 20 days after Thanksgiving, when family gatherings happened, and then against our advice people obviously also had Halloween parties."

Kenney thanked Albertans who abided by the new public health guidelines over the past several weeks, saying the numbers so far show the province is making progress.