An oilsands company is defending the Alberta NDP government, after a United Conservative Party candidate accused Premier Rachel Notley of wanting to shut down the industry.

'All energy companies know that we have to address the concerns of climate change,’ oilsands company says

An oilsands company is defending the Alberta NDP government, after a United Conservative Party leadership candidate accused Premier Rachel Notley of wanting to shut down the industry.

UCP leadership hopeful Brian Jean told a roomful of oilsands professionals Tuesday that Notley and the the NDP wanted to "close down the oilsands."

Jean, speaking at this week's Oil Sands Trade Show & Conference in Fort McMurray, said the Notley government's policies, including the carbon tax, were chasing investment away from the industry. 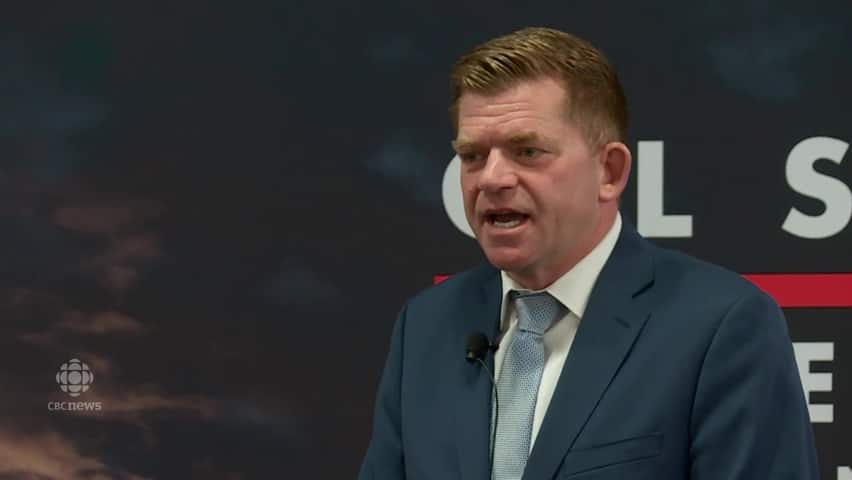 3 years ago
1:00
United Conservative Party leadership candidate Brian Jean accuses Premier Notley of planning to shut down the Alberta oilsands. Notley argues that her government is leading the oilsands into the future. 1:00

But one day after Jean's comments, Satoshi Abe, the president of Japan Canada Oil Sands Ltd. (JACOS), said he supports the carbon tax.

"I think, not only for us, but all energy companies know that we have to address the concerns of climate change," Abe said Wednesday. "I would like the government to take the leadership on that."

Abe was speaking at a ribbon-cutting ceremony for the company's Hangingstone oilsands expansion.

The steam-assisted gravity drainage operation uses heated water to melt bitumen underground so it can be piped to the surface.

The project is currently producing 1,000 barrels of oil a day and is expected to produce 20,000 barrels by mid-2018. The site currently employs 190 people.

The project is a joint venture between JACOS, which is owned by a consortium of Japanese companies, and Calgary-based Nexen.

Notley attended the ribbon-cutting ceremony and said the expansion project demonstrates that companies are eager to invest in Alberta's oilsands.

"These industry leaders, several of them speak about how they have a tremendous amount of confidence in the economic case," Notley said.