It's been 30 years since Rod Chayko was flung from a flying roller-coaster at West Edmonton Mall, and it bothers him still that there is no memorial at the site to honour the three people who died that day.

'David, Tony and Cindy are dead. I think about it every day'

It's been 30 years since Rod Chayko was flung from a flying roller-coaster at West Edmonton Mall, and it bothers him still that there is no memorial at the site to honour the three people who died that day.

Chayko was the lucky one, the only survivor in the last car that jumped the track on the popular Mindbender ride on June 14, 1986. The car had been going about 100 km/h when it struck a pillar and hurled its four passengers to the concrete floor below.

It shut down for more than a year and, after safety modifications, remains a main attraction at the mall.

Chayko, a 55-year-old retired welder, lives in Revelstoke, B.C., his once broken body a source of daily pain that he treats with medical marijuana. He kicked prescription painkillers more than a decade ago.

He's been back to the mall several times over the years, on visits with his children and grandchildren. And although he won't ever go on the Mindbender again, he doesn't want to discourage others from getting on the ride.

The crash was "an accident — plain and simple," he says.

But it's one that should be remembered.

'David, Tony and Cindy are dead'

"David, Tony and Cindy are dead and it changed my life forever," says Chayko.

"I think about it every day."

Chayko had been living in Fort McMurray when he and his friend David Sager, 24, of Calgary travelled to the mall for a night of fun. Chayko describes his friend as a thrill-seeker who liked fast cars and had just won an amateur strip-tease contest at a bar a night earlier.

The pair were last to get on the Mindbender and sat in the last car behind Tony Mandrusiak, 24, and his fiancee Cindy Sims, 21.

"I remember feeling it sway and grabbing onto the handle," recalls Chayko. "The next thing, I was landing on the ground." 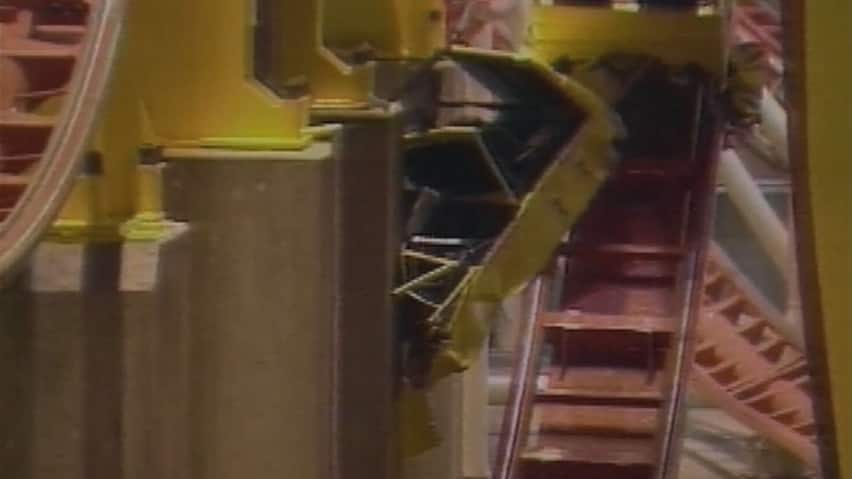 From the archives: 3 killed in Mindbender derailment

5 years agoVideo
1:59
It's been 30 years this week since a car on the Minderbender roller-coaster at West Edmonton Mall derailed, killing three. 1:59

The crash shattered his lower legs, crushed half his left shoulder and broke his feet, pelvis, lower back and every rib on his left side.

Doctors who couldn't count all the fractures in his legs thought they might have to amputate, but opted to surgically insert metal plates so the bones might heal. After six months in hospital, Chayko stood in leg braces and married his girlfriend, Joanne.

Chayko eventually ditched the braces and doctors removed the plates from his legs. He continued working for 15 years before he retired because of chronic back pain.

A provincial inquiry eventually blamed the crash on a defunct West German company for design and manufacturing flaws. It found that four bolts had worked loose, allowing a wheel assembly to fall off the roller-coaster car.

'To me that's not a memorial'

Chayko says he received an undisclosed settlement from the mall after the accident. "I'm famous but I ain't rich."

And the mall gives him free tickets to mall attractions whenever he asks.

But he has also requested a few times over the years for the mall to put a memorial bench near the Mindbender. Staff offered instead to put a plaque on an office wall, Chayko says.

David, Tony and Cindy are dead and it changed my life forever.- Rod Chayko

Chayko says he doesn't want to make a fuss, but is still hopeful the mall might change its mind.

To honour the anniversary of the crash this year, Chayko ordered custom hoodies, with "survivor" stitched on the arm.

Not every one knows his story, he says, but when he explains that he was on the Mindbender when it crashed, people nod.

"'I remember where I was that day' — everybody says that one," says Chayko.