Matthew Cardinal’s big papier mâché head represents an Indigenous warrior, with a traditional Pendleton pattern on one side of his face and a handprint on the other.

Matthew Cardinal's big papier mâché head represents an Indigenous warrior, with a traditional Pendleton pattern on one side of his face and red stripes on the other.

"Any form of artistry, I believe, should spark emotion," Cardinal told CBC in an interview this week.

"As long as someone feels something toward it, it's not a bad project."

Cardinal is one of four young Indigenous artists participating in an art project with the Centre d'arts visuels de l'Alberta (CAVA), a francophone gallery in Edmonton's Bonnie Doon neighbourhood.

The papier mâché creations are a continuation in a series of big heads representing Alberta's francophone culture.

Indigenous artists were invited to contribute, since their cultures have intersected with French speakers from the beginning of colonization, said CAVA's vice-director, Em Lamache.

"See what we have in common, what is different, and how we can work together to create links between our communities."

Looking at art can help people understand someone else's point of view, said Cardinal, who has painted several murals in Edmonton. 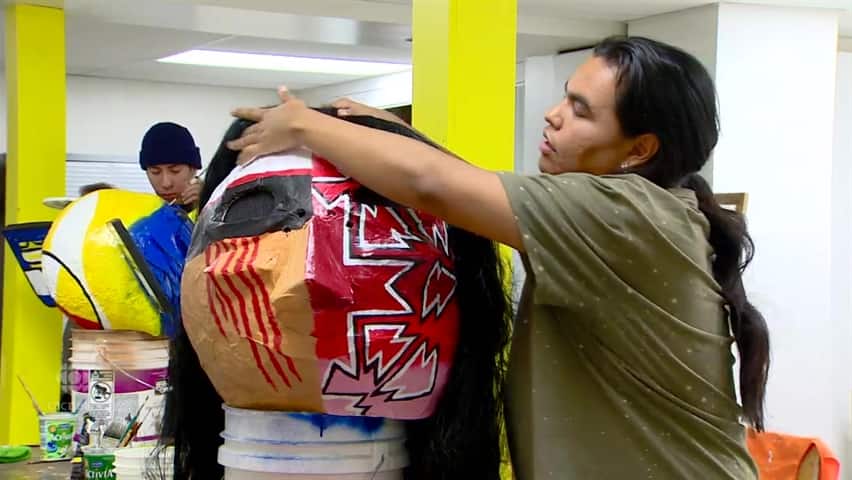 'I keep coming home with shirts full of paint'

"Art definitely solidifies a moment in time, and it helps people share a part of who they are and a part of their life," the 23-year-old said.

He hopes people will take the time to reflect on what reconciliation with Indigenous people means to them.

Once completed, the big heads will be displayed together during Alberta Culture Days, from Sept. 28 to 30. The exact location hasn't been determined.

They can also be worn and paraded in other settings, said Lamache.

"They're very versatile, and they attract a lot of attention."

Two established artists from Edmonton are mentoring the youth throughout the creation process.

"I'm just helping here and there, they have their own vision," explained Mike Holden, an Indigenous painter whose work Thunderbird Warrior has been acquired by the Royal Alberta Museum.

He hopes the collaborative aspect of the work will shine through when people look at the collection of big heads.

"I really like how the francophone and Indigenous people are merging through this project," said Holden. "I would like that to be portrayed somehow."

The participants are invited to create a collaborative piece that represents what they felt during the discussions.

The panels take place Sept. 28 in Legal, Alta., and Sept. 29 at the CAVA gallery in Edmonton.