As a preteen, Tishynah Buffalo flipped through fashion magazines, wondering why the Indigenous culture she'd come to appreciate was so noticeably absent.

As a preteen, Tishynah Buffalo flipped through fashion magazines, wondering why the Indigenous culture she'd come to appreciate was so noticeably absent.

I wanted to be the one to show people in the world our Indigenous creativity.- Tishynah Buffalo

"I wanted to be the one to show people in the world our Indigenous creativity," Buffalo said.

She didn't foresee the scale on which her dream would come true.

The 26-year-old designer, who lives on the Alexander First Nation reserve about 40 kilometres north of Edmonton, has been invited to share her work during London Fashion Week on Feb. 19 in a show put on by Heartland Modelling Agency.

Buffalo began making waves in late 2015, when an Indigenous model wearing a red-velvety gown with a black and white lace feather for the back walked the runway at Fashion Speaks Saskatchewan in Regina.

Buffalo, registered on George Gordon First Nation in Saskatchewan, learned to sew at school on the Alexander reserve, where she grew up with her mother, father, two younger sisters and younger brother.

She undertook her first major project when she was 19 — powwow insignia for her young son.

It was a process of trial and error, but with a finished product she was proud to see her little boy wearing at the event, she felt more confident.

Buffalo then attempted to make him a coat — this time, out of a Pendleton blanket similar to the ones she admired as a little girl.

The blankets typically cost between $200 and $400. The one she used to make her child's coat was donated.

"People started liking it and telling me to make more," she said. 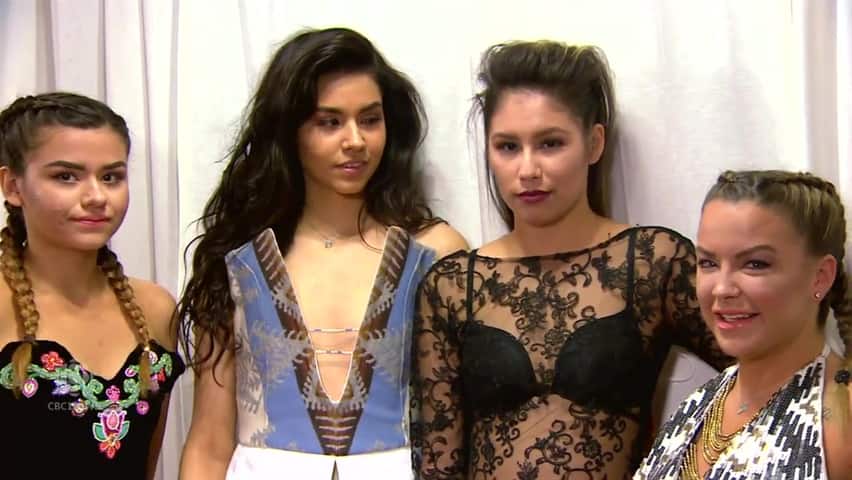 4 years agoVideo
1:14
Tishynah Buffalo creates Indigenous fashion with modern sensibilities -- and her latest line is taking her all the way to London. 1:14

She began taking custom orders, charging based on the price of the materials, sometimes opting for printed fleece instead of the wool blankets. Any leftover profit became part of her effort to save up for more fabric.

Buffalo spends hours at home sketching out the clothing she wants to make and then creating the patterns needed to bring them to life. She stitches the carefully-measured paper onto the fabric, cutting around the edges with the same precision she uses when she sews the pieces together.

Reinvented Indigenous traditions on contemporary catwalks have been a point of controversy.

Non-Indigenous designers have been singled out with accusations of cultural appropriation.

Buffalo said it's not that she doesn't want to see her heritage on the runway, it's about sharing it in respectful way that promotes understanding.

I think it makes it different because it's our culture, we're showing the world our culture.- Tishynah Buffalo

"I think it makes it different because it's our culture, we're showing the world our culture," she said.

When it comes to non-Indigenous people wearing Indigenous designs, Buffalo said she just hopes they appreciate the history behind the garments and accessories.

"Understand where the designs ... came from," she said, "which designer makes it, which culture you're wearing."

As an Indigenous designer, she wants to foster appreciation with her designs, which have typically been featured in fashion shows on Indigenous models.

Papin said she's honoured to be a part of an effort to promote strong women — and strong Indigenous women in particular.

"Sometimes I feel First Nations don't get the recognition that they deserve, or they might not have the resources or confidence," Papin said. "I'm really thankful that Tishynah has us to go with her because I know we all feed off each other's positive energy."

Buffalo organized a fashion show on the Alexander First Nation reserve on Jan. 20 to help with the effort. The women made about $4,000, but to get them all to London will cost about $8,000 more. On the reserve right now, they're raffling off a hoodie Buffalo made.

"For her to have her reserve back her up and to have other models who support and love her for what she has done, I think is huge," Papin said.

Buffalo also has the support of other designers, including from the Indigenous community.

With more experience on the fashion-show circuit, she recommended Buffalo join her at the Heartland London Fashion Week show.

"Her collections are always just breathtaking, they just stand out, they're so different," Oro said. "She's just really talented at what she does."

Buffalo said she wants her two children to know anything is possible, especially her young daughter.

"I want to show other people and the youth that we can go out there and do stuff like this."