When Jack the Labrador retriever went missing almost two years ago, his owners learned some lessons about human nature, at its best and worst.

Jack is back! Labrador retriever, missing since September 2015, now home where he belongs

When Jack the Labrador retriever went missing almost two years ago, his owners learned some lessons about human nature, at its best and worst.

They heard from people across Western Canada who wanted to help.

They heard from psychics who said the dog was dead, and from a scam artist who claimed to have Jack and wanted a ransom for his return.

Jack, who was very much alive, eventually turned up almost 400 kilometres from home, and has now been reunited with his family.

Thus one not-so-shaggy-dog story has a happy ending. 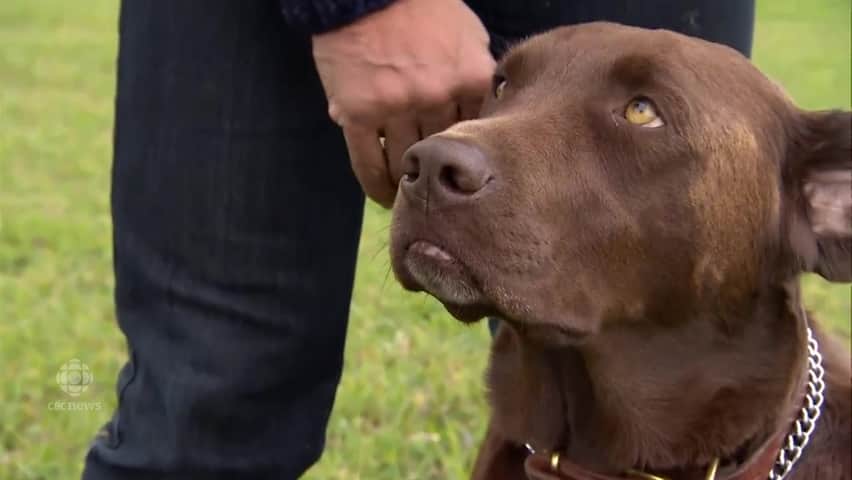 Gord and Lorna Heacock live in the Carnwood area, east of Drayton Valley, and had Jack for about 18 months before he went missing.

"We had Jack from a pup," Gord said. "And as a pup they're very loving, and they just want attention to the nth degree. So he was pretty much the centre of the household."

With seven kids and numerous grandkids in the family, that meant a lot of attention.

Jack liked to be outside and enjoyed swims in the nearby dugout, but never wandered far away.

But in September 2015, the Heacocks returned from work to discover Jack was gone.

They talked to neighbours, drove the neighbourhood. Nobody had seen him.

"We searched and searched for days, found nothing local," Gord said.

They called the RCMP but weren't impressed with the response.

"For some strange reason, when an animal is stolen, to the authorities it's insignificant," he said. "We've had property stolen, a trailer worth $1,500 got far more interest than an animal."

Calls from Regina to Vancouver

Lorna posted details on Facebook, including on missing pet groups. They put notices in newspapers and their daughter put up a billboard. They called vets and kennels and notified the company that provided the microchip implanted in Jack.

"In a matter of days, there were literally thousands of people who were concerned," said Gord, his voice breaking with emotion. "We were getting calls from Vancouver to Regina. 'Here's a dog, it's lost. Is this your dog?' And it was really comforting to know that people out there were concerned, looking for your pet."

They also heard from a few people with malicious intentions, including some claiming to be psychics who told them the dog was dead. Another said he had Jack and demanded the Heacocks purchase a pre-paid credit card and give them the number in return for their dog.

As time went by the phone calls diminished. The family began to lose hope.

"It probably took 20 months before I would come in the driveway and not expect to see him there," said Gord. "Words do not describe how an animal fits into your household."

Then this summer, they got a call from the Grande Prairie Regional Animal Care Facility.

"They had a dog that was caught wandering at large," he said. "And they had scanned his chip and he came up as us, and they gave us a call. We drove up there  next morning."

The scene wasn't like something you'd see in the movies.

"It was not Hollywood," said Gord. "It was not the dog comes skittering around the corner and jumps up and knocks you down and licks your face. Not at all."

"When we picked him up he was 94 pounds, he was obese," said Gord. "He had sores on his elbows from sleeping on a cold, hard floor. I wouldn't say he was abused but he was willfully neglected."

It wasn't until Jack got home that he finally clued in to what was happening.

"He was walking from the house to the dugout and all of a sudden it clicked for him," said Gord. "He's looking back at me, and it was as if he's saying, 'Dad! I remember! This is awesome! We're going to go for a swim.' "

Gord said the chocolate lab couldn't swim laps like he once did is slowly getting back into shape. They keep a close eye on Jack, which is easy given that Jack won't let Gord out of his sight. Jack also has a sibling to look out for him now, a pit bull  adopted during his absence.

The family still has no idea who took Jack, or how he ended up in Grande Prairie.

Lorna Heacock has some advice for other pet owners.

"They need to know an identifying feature on their pet," said Lorna. "Jack had a brown spot beneath a pupil in one eye, which helped me to identify him by looking at someone's photograph. And that saved us a lot of time chasing the wrong dog."

She also suggests a good photo.

"A current close-up photo without people in it. We didn't have one, believe it or not."

Scott Stevenson is a journalist with CBC Edmonton. He has worked in the news industry in Alberta for nearly 20 years, including 10 years with Alberta's other public broadcaster, CKUA. He has also worked in newsrooms in Calgary, Lethbridge, Medicine Hat and Cold Lake. Share your stories with Scott at scott.stevenson@cbc.ca.