Impassioned Sandra Jansen calls on legislature to stand against misogyny

Calgary MLA Sandra Jansen drew a standing ovation Tuesday after she rose in the legislature and gave an impassioned speech denouncing the hateful and misogynistic comments she has faced since crossing the floor to join the NDP last week.

Calgary MLA Sandra Jansen drew a standing ovation Tuesday after she rose in the legislature and gave an impassioned speech denouncing the hateful and misogynistic comments she has faced since crossing the floor to join the NDP last week.

The first words out of the former Tory MLA's mouth likely raised eyebrows when she said: "What a traitorous bitch!" 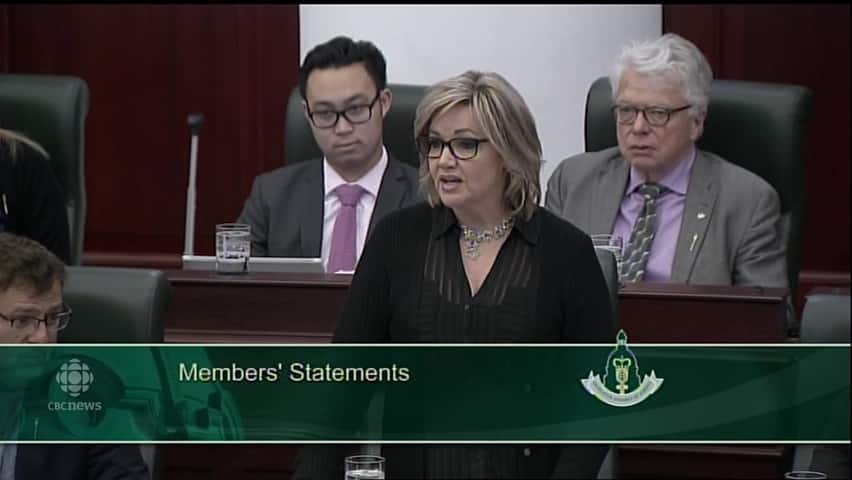 4 years ago
2:01
Sandra Jansen read a member's statement before question period on Tuesday, citing hateful messages she has received since crossing the floor last week. 2:01

The Calgary-North West MLA, first elected in 2012, has faced abuse and threats since she crossed the floor to join the government last week, and has since been assigned a temporary protection unit to accompany her, a spokesman for the premier's office told CBC News.

In her statement, Jansen went on to read a litany of demeaning and despicable comments she has faced on Twitter and Facebook.

Her point made and the house apparently shocked into silence, Jansen then made a plea to her colleagues in all parties to stand up against hate speech levelled at women in politics.

'If we don't feed it, we must oppose it'

"If you are stunned by the words you have heard in the last few days," Jansen said to MLAs in the legislature, "if you reject the inherent violence behind them, and you know that harassment and abuse, even if it's verbal, even if it's online, and even if it's directed at a political opponent, is poison. Let us be strong and clear in our resolve that no matter where we sit along political lines, we stand together against this.

Jansen then said: "If we don't feed it, we must oppose it. Please oppose it. Don't ignore it. Don't look the other way. Don't excuse it. Because our daughters are watching us."

Girls and young women see the challenges faced by women in politics, Jansen said, and they often hear the abuse levelled at them.

"Imagine if we let that poison become normalized?" Jansen asked. "Or if our daughters forego the political arena altogether. That scares me."

Her member's statement concluded, Jansen then sat down while the rest of the MLAs got to their feet and applauded for more than 20 seconds.

Jansen crossed the floor to join the NDP last week, nine days after she dropped out of the PC leadership race.

She quit the race after alleging she was harassed and intimidated by volunteers from another candidate's campaign during a weekend PC meeting in Red Deer. Donna Kennedy-Glans dropped out of the leadership race on the same day, leaving four men as the only contenders to lead the party that was swept from power by the NDP in May 2015.