‘Don’t leave your vehicle running ... or you may be walking,’ warns Staff Sgt. Ron Smithman 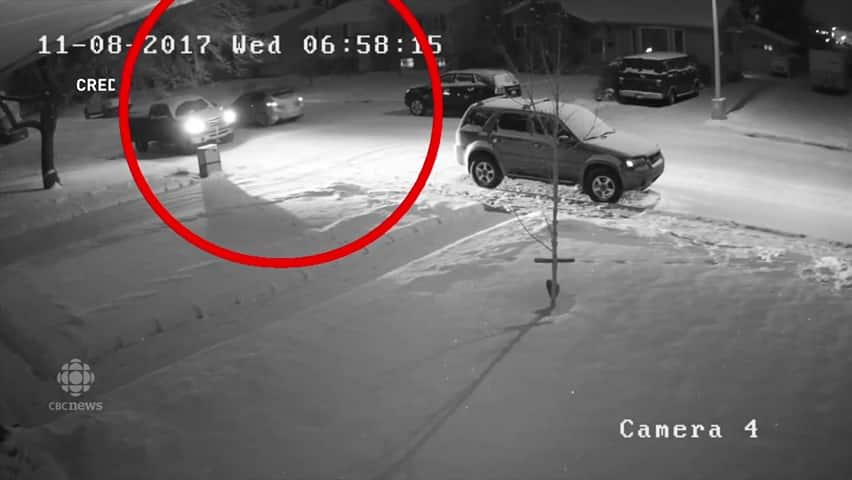 Watch as thieves make off with idling pickup

Edmonton police say that 33 idling vehicles have been stolen in just the last nine days.

That's 25 per cent of all the vehicles stolen in the city recently, and this is just the beginning of the cold months.

An idling vehicle can disappear in a matter of seconds, Staff Sgt. Ron Smithman told Edmonton AM Friday morning.

"It just happens that quickly. Just yesterday a fellow went into a business to grab something. Moments later he left to see his van driving away."

Some of these are crimes of opportunity, according to Smithman; someone's cold and they see a running vehicle, hop in and drive away.

But organized crime is also taking advantage of Edmontonians' winter habit of leaving their vehicles running, he said.

"Some of these thieves are given a shopping list and saying, 'Hey we're looking for a Dodge Ram 2500, 2008 or something, red in colour' and then they'll go out and look for those exact type of vehicles."

Smithman says he hopes people will be more careful with their vehicles.

"It's just happening everyday and we just need people to take the time to secure their vehicles," Smithman said.

If a car is left running, Smithman says a club to secure the steering wheel and thwart thieves is a good investment.

He also recommends remote starters that leave doors locked, or spending the money on GPS tracking.

But he says the best way to stop thieves from driving off with your idling car is to not leave it running at all.