The Edmonton woman fired from her oilsands job after raising concerns about Islamophobia welcomed news of an investigation by Husky Energy.

'I was really happy to hear that because it meant that they were taking me seriously,' says worker 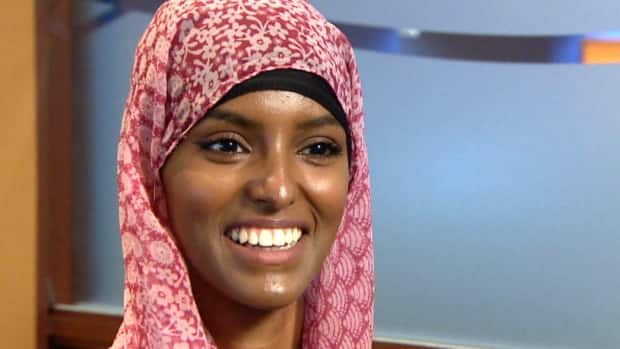 'I have received a lot of good comments ... saying that they're proud of me, to be strong'

3 years ago
1:03
The Edmonton woman fired from her oilsands job after raising concerns about Islamophobia welcomed news of an investigation by Husky Energy. 1:03

The Edmonton woman fired from her oilsands job after raising concerns about Islamophobia welcomed news of an investigation by Husky Energy.

Husky Energy said it would investigate their recent termination by subcontractor Newcart Contracting Inc., after being contacted about the case by CBC News.

"I was really happy to hear that because it meant that they were taking me seriously," said Rashid, who has filed a complaint with the Alberta Human Rights Commission.

Rashid, a student at York University in Toronto who was counting on the income to cover student loans and living expenses, was hired to work on a maintenance project at the Husky upgrader in Lloydminster, Saskatchewan.

But she and her colleagues were fired on June 3, just 11 days into their contract.

Earlier that day, they had complained about an Islamophobic incident targeting Rashid — the second incident in days.

In both interactions involving two different workers, Rashid was told to take "that thing" off her head, referring to her hijab.

The men argued that if they couldn't wear hoodies then she couldn't either, said Rashid, an account backed by witnesses who also spoke to CBC News.

The company said in a statement it provides a "safe, inclusive employment experience" and accommodates religious requirements whenever possible under workplace health and safety policy and legislation.

But a taped recording of Rashid and her colleagues confronting their supervisors provides more insight into their dismissal.

One manager said Newcart was starting to cut back on workers and the trio were "randomly selected."

When pressed, the manager explained random meant he chose their names from the sign-in sheet. He warned that they were no longer eligible for rehire on the next project because of their behaviour, and defended the workers' comparison of the hijab to a hoodie.

The supervisor did not raise safety concerns about Rashid's hijab, and she said she was told earlier it wasn't an issue.

Rashid's story has sparked fierce debate online, with many insisting it was a case of Islamophobia or ignorance while others argued it was about safety.

"It's a huge safety issue! No hoodies or baggy clothes that can get caught in machinery," wrote one person on Facebook.

A long-time oil industry worker who wrote to CBC said "any head covering, hoodie, raincoat hood first had to be fire retardant," adding the items could also cause a blind spot "and people have been hit [by] moving equipment from this. My question is at what point do you draw a line?"

In her job as a safety watch, Rashid looked out for the safety of her coworkers, including watching what they wear.

She said Newcart and Husky told her they had no concerns with her hijab, but on previous projects when other company supervisors did, she wore a 'fire retardant hoodie' on top of her hijab, as well as always tucking her head scarf tightly into her coveralls.

You have to bite your tongue. I'm a minority so I don't have a say, even though I was born here.-  Maryama Jama , dismissed worker

Like Rashid, Maryama Jama, 24, who was also fired, relies on oilpatch jobs to cover her living expenses and tuition at York University, where she studies Health Sciences.

Both women are now scrambling to find other employment. Bills are piling up and they fear they won't be able to return to school this fall.

Despite this, Jama decided to speak out about the racist comments she said she has endured in the work camps for the past three years, such as:

"I can't find work because ISIS is taking all of our jobs."

"It's shocking but you have to bite your tongue," said Jama, who has also filed a human rights complaint and welcomed Husky's investigation.

"I'm a minority so I don't have a say, even though I was born here. It makes me feel helpless and useless in the country I was born in," she said. "That's how it is as a black girl in this world. You must go through those obstacles in life."

Mark Cherrington, a social justice advocate in Edmonton, said "the Canadian thing to do" would be for Husky to provide the trio with another employment opportunity.

"Their lives were really disrupted, in my opinion, by no fault of their own other than their religious beliefs," he said.

He urged the companies to foster a more inclusive culture.

"So if your employees are ignorant, if they're not understanding, if there's intolerance, as an employer you have to do the utmost not only to address the immediate concerns but also the bigger picture," said Cherrington.

Husky has said it's investigating due to "the seriousness of these allegations," but added that all temporary contractors are leaving the Lloydminster site because the maintenance project is ending.

'I want all the people who can't speak for themselves, that feel like they don't have a right to speak  up, I want them to know that I'm speaking up for you' - Amina  Rashid , dismissed worker

In a statement, the Alberta Muslim Public Affairs Council said "Islamophobia in the workplace is not acceptable and those responsible need to be held accountable."

"We will be following the investigation closely and look forward to the final decision," wrote AMPAC president Faisal Khan Suri.

Rashid, who has lived in Canada most of her life, took the Islamophobic and racist comments unleashed by her story in stride, saying she's touched by all the beautiful messages from people she knows and strangers alike.