Clay Palmantier's Cinderella story started not with a glass slipper, but with this discarded beer can.

‘I am glad somebody drank it and threw it away, because we're living the dream.’

Two buddies from Williams Lake, B.C. are living a hockey dream after finding a treasure ticket to Sunday's Heritage Classic in a trashed beer can.

Clay Palmantier said he has hockey to thank for his fluke find. Just over a week ago, he was dropping his son off at an outdoor hockey practice when he noticed a beer can on the ground in the parking lot.

"I jumped out, grabbed the can and threw it in the truck," he said. "I looked at it and thought 'Wow, what a cool logo.'"

He liked the Heritage Classic logo so much, that he picked up a 24-pack of the beer on the way home.

But as he loaded the Molson Canadian beers in the fridge, something was off. He noticed that not one of the cans he had bought looked anything like the can he had found in the parking lot.

"I was folding the box the beer came in and I was taking it out to the recycle bin. And it said something about 'lucky cans.' And I was like 'wait a minute,'" said Palmantier.

The can he had found discarded on the ground — which he had since thrown in the recycling bin — looked just like the winning cans on the box. Palmantier scrambled to the garage and tore through the bin, searching like a wild man until he found it.

"It said 'Congratulations you have found a winning can. Call this number.'" he said.

He and his wife called the number. It was Friday night and no one was in the office. They had to wait until Monday for confirmation — but the news was worth the wait: Palmantier had won a VIP, all-expenses-paid trip for two to the Heritage Classic.

"It is a Willy Wonka story. Like finding the golden ticket," Palmantier said.

He couldn't wait to tell his friend Jake Hilton, another diehard hockey fan, and invite him to come too.

"Can you go somewhere on short notice?" he asked, before he broke the news. 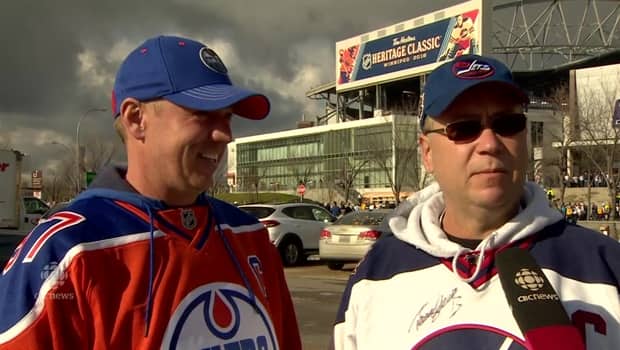 4 years ago
0:20
Two buddies from Williams Lake, B.C. are living a hockey dream after finding a treasure ticket to Sunday's Heritage Classic in a trashed beer can. 0:20A week later, they were in Winnipeg doing things that felt like they were inside a shiny beer commercial: VIP parties, free meals, tickets to both games — plus a meet and greet/autograph signing with their alumni idols.

They still can't believe their luck. Hilton wonders if there may even be a connection to his own beer league.

"Clay found it on a Friday. And the guys I play hockey with, we play Thursday night," Hilton said. "I'm just wondering if it was one of them. You never know. If so, thanks guys, "

Both friends joked the experience has forever changed the way they will look at stray beer cans on the street.

"I think the message would be for everybody out there is don't throw your stuff away, recycle," said Palmantier

"That's what you get for littering I guess," chuckled Hilton.