Bryce Kohler, 10, has been suspended indefinitely by Hockey Alberta after he was found to be playing in two different hockey leagues. 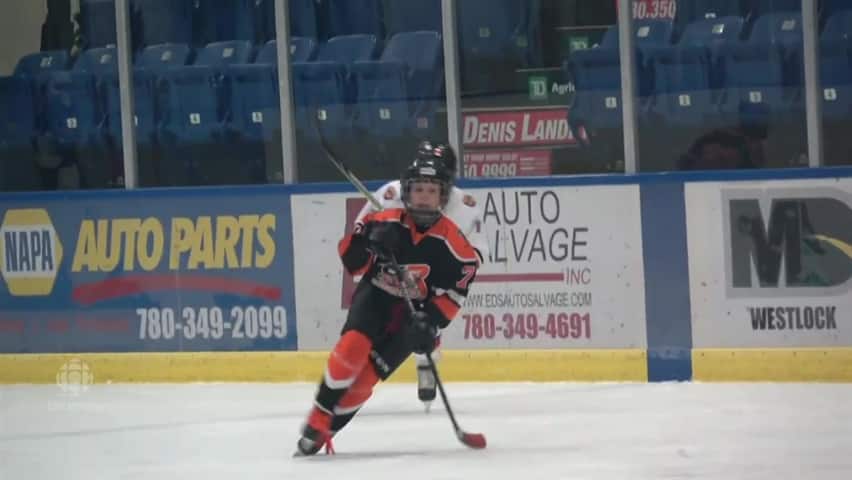 Bryce Kohler would like nothing more than to lace up his skates and get back on the ice with his hockey team, the CR Knights.

But the 10-year-old from Calahoo, Alta., about 20 kilometres north of Edmonton, has been suspended indefinitely by Hockey Alberta for playing in two different leagues at the same time.

Kohler started the season playing in his local minor hockey association with the Atom 1 CR Knights. He broke the rules when he also started playing hockey with Team Revolution Hockey out of Leduc, Alta.

Somebody reported it to Hockey Alberta and Kohler was suspended from his minor hockey team.

Team Revolution plays in what's considered a "super league." The team plays in various tournaments in and out of the province, as well as against eight other similarly assembled teams across the province.

Playing in both leagues is a no-no according to Hockey Alberta rules, and now Kohler has been suspended from the league indefinitely.

"We're upset because of the regulation itself, that Hockey Canada has the power to tell my son that he can't play anything else but minor hockey," said his father, Ryan Kohler.

Bryce even wrote a letter pleading to be allowed back on the ice with the CR Knights, saying, "I feel very sad that I get to listen to my friends all talk about the big hockey game that I couldn't play in."

"Everyone else is kind of afraid to do what I've done," his father said. "Everybody's afraid of Hockey Canada because they don't want their kid blacklisted for life."

"All we were trying to do was get out there and play a few more games somewhere," he said. "They have the ability to tell him what he can and can't do. We just think that's heavy-handed and wrong."

In a Hockey Alberta memorandum to all minor hockey associations last April, teams were warned that any players who play for "unregistered programs and non-sanctioned leagues" that don't fall under the Hockey Alberta/Hockey Canada umbrella will face "loss of all privileges with Hockey Alberta and Hockey Canada for the remainder of that season."

"It may be perceived as heavy-handed, but it is a policy and a process that gives the family, that gives the individual player, the choice," said Brad Lyon, spokesperson for Hockey Alberta.

"They can make the choice to which place they want to play, but that's the key — they have to make the decision on one, they can't do both."

Jim Pickford started Team Revolution Hockey five years ago mainly because he was fed up with the restrictions put in place by Hockey Canada.

"I just had enough of minor hockey and I just didn't see the value of keeping my kids in it, so we started our own brand," said Pickford, who now has 45 athletes signed up playing on three teams against similar teams across the province.

"It's definitely a dictatorship," Pickford said of Hockey Alberta.

"It's created a real monster and I just think they're used to doing what they just want and people are afraid to stand up because of the repercussions it has for their kid moving on in hockey."

As for Bryce Kohler, Pickford said he's behind him all the way. If he isn't reinstated with his minor hockey team, Pickford said there's a spot for him on Team Revolution.

Kohler's minor hockey team is also standing behind him. The association has said it will pay the $200 fee to get him reinstated, if possible.
CBC's Journalistic Standards and Practices|About CBC News
now