Hatchimals, the latest must-have toy, is selling out across Canada as parents in Edmonton hunt in vain.

'That day, I went to every toy store on the south side I could think of' 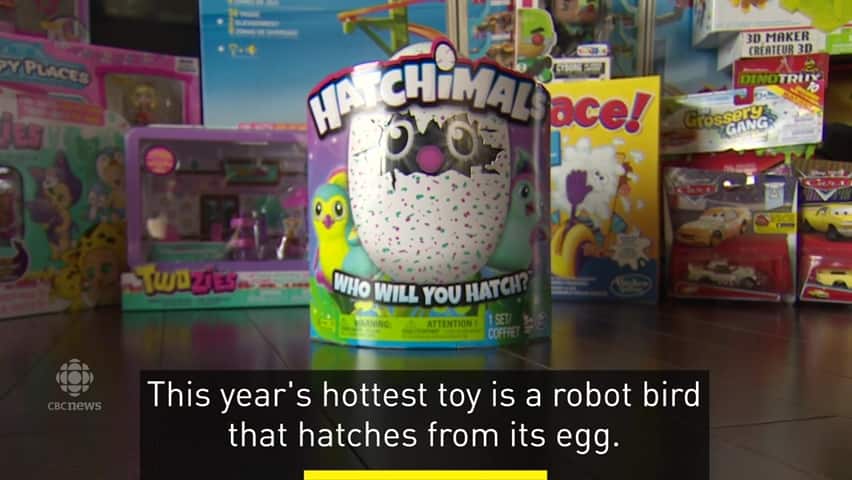 Hot off the shelves: Hatchimals

4 years ago
0:21
Parents are scrambling to get their hands on one of the hatching egg toys before Christmas. Demand is so high that the eggs are going for hundreds - and even thousands - of dollars online. 0:21

Janis Liston hoped to get ahead of the Christmas rush, trying to land a Hatchimals toy in early November. But when she arrived at an Edmonton store, the clerk told her the entire city was sold out.

"That day I went to every toy store on the south side I could think of — Wal-Mart, Canadian Tire, Superstore, Toy Masters — trying to find this, and she was right," said Liston, a mother of two children ages 11 and seven. "There were none."

Some days later she responded to a sale, stood in line and managed to grab the last one.

"Walking around the store, I didn't leave my cart because I was too afraid someone might take this, because I knew that's what everyone was looking for in the store."

Hatchimals are the hottest toy of 2016, in the same way that Tickle-Me-Elmo and Cabbage Patch Kids were nearly unobtainable in years past.

The toy is shaped like an egg. It makes sounds while parts of the egg light up. The egg responds to touch and a fuzzy bird eventually pecks through its shell. The creature develops through play, learning to speak.

In a statement, Toys "R" Us Canada couldn't confirm if additional shipments of the toy would arrive before Christmas.

Hatchimals have been selling only since October, but across Canada, stores haven't been able to keep up with demand.

Online, the $80 eggs are selling for hundreds — and even thousands — of dollars.

"We were getting information from parents saying they were seeing fights in stores over Hatchimals," said Kendra Magnus-Johnston of Bargainmoose, a Canadian website that posts deals appealing to parents.

"We're also seeing on our website tens of thousands of parents regularly checking the site for stock information on the product. We're seeing traffic like we've never seen."

Magnus-Johnston says the toy's popularity isn't surprising because of its cuteness and the way it engages children to care for it.

Natalie Dvorski split shopping trips with her co-workers to try to find a Hatchimals toy for her three young children, but hasn't been successful.

Now she's holding out hope that one of her colleagues will find something online, but if not, she'll cut her losses.