Hail the size of tomatoes wreaked havoc during a severe thundershower Sunday night in Evansburg, west of Edmonton.

'We got lucky this time,' Yellowhead County councillor says

Hail the size of tomatoes wreaked havoc during a severe thundershower Sunday night in Evansburg, west of Edmonton.

"We were all very shocked, we thought there was going to be a tornado," 12-year-old Payton Hicks said.

"I think it looked like white tomatoes," he said. "My greatest fear was that it was going to start breaking through the windows and fall on the floor."

Payton was one of more than 40 kids at Camp Evansburg who charged to the windows when they heard what they thought was loud thunder. They were shocked to see the thunder was the massive hail hitting the camp hall. 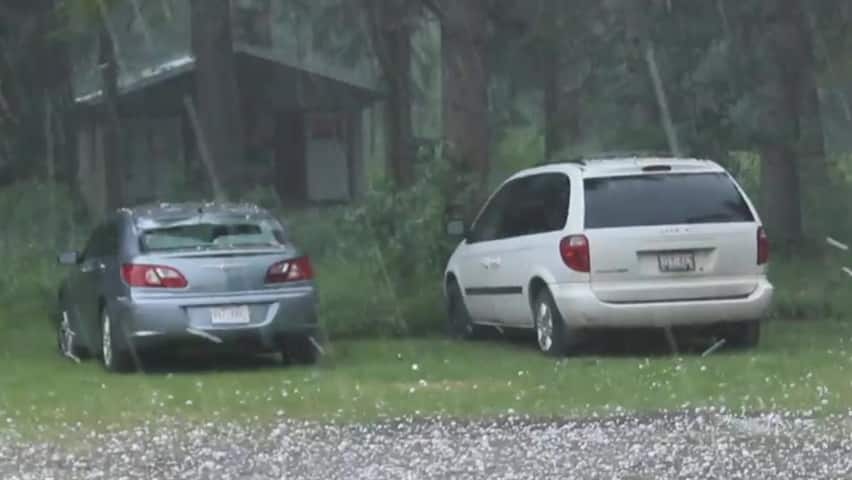 3 years agoVideo
0:09
A hailstorm hit Evansburg Sunday evening, around 90 kilometres west of Edmonton. Some hail was the size of billiard balls. 0:09

The storm didn't last long, but it left its mark on the campground. Ice covered the fields at Camp Evansburg long enough for the campers to go out and roll the balls of ice on the grass and compete in a stick knocking challenge.

"We even added some of the balls to the [pool] water to make it Antarctica," Hicks said. "It was awesome."

It was less awesome for many of the adults at the camp who found their cars with billiard-ball-sized dents, and windshields ribboned with cracks.

"The back windshield is totally smashed through, and there's some dents on the top of the car and the windshield," he said.

In town, Yellowhead County Coun. Sandra Cherniawsky drove around Sunday night speaking to residents, most of whom  said their vehicles were damaged, she said.

"It could have been devastating, but it wasn't a very far-reaching storm," Cherniawsky said. "We got lucky this time."

No crop damage has been reported so far, but the county is waiting to hear from farmers in the next few days, Cherniawsky said.