Hail the size of billiard balls fell from the skies over Evansburg Sunday night, causing a damaging racket.

'It was like people were throwing rocks at us, but louder'

Hail the size of billiard balls fell from the skies over Evansburg Sunday, causing a damaging racket.

Environment Canada had issued a severe thunderstorm watch for a large area west of Edmonton, and shortly before 5:30 p.m. the storm struck — battering homes and vehicles for nearly half an hour.

'It was insanely loud'

Once the storm passed, many residents took to social media to share photographs and video of the hail, which ranged from the size of a chicken egg to baseball-sized pellets. Becki Kehler was at Camp Evansburg when the wind started howling and hail rained down from black clouds above.

"It was pretty crazy. It was insanely loud. That's what startled me the most was how loud it was," Kehler said.

"I can't really even describe it. It was like people were throwing rocks at us, but louder. It was pretty crazy."

Kehler and her husband Kelvin have been volunteering at the summer camp for five years, and this season, two of their sons are among more than 40 kids staying there. 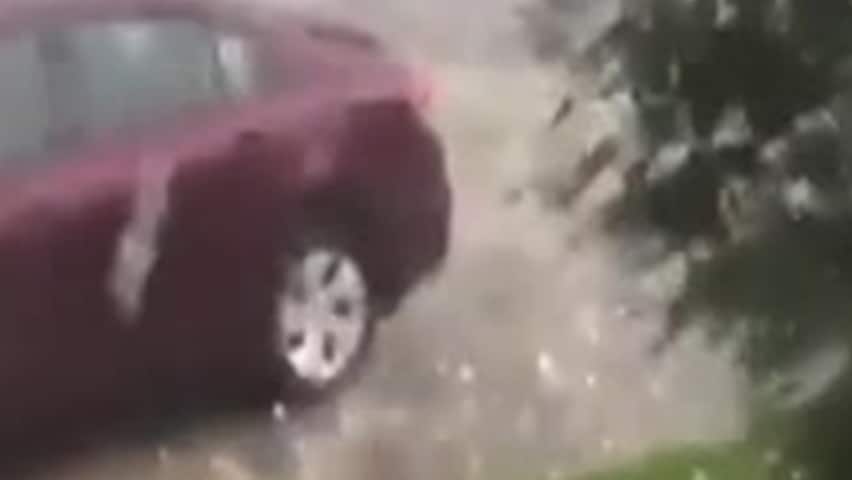 3 years agoVideo
0:16
hailstorm hit Evansburg Sunday evening, around 90 kilometres west of Edmonton. Some hail was the size of billiard balls. 0:16

The hail caused a commotion among the campers who were just sitting down for dinner in the lodge mess hall, Kehler said.

"It was supper time so we had called all the kids into the lodge and all of a sudden, while we were praying, there was this loud racket, it was hilarious. We were like, What are the kids doing? How disrespectful.

"And we look up and we realize it's not the kids at all, it was huge balls of hail falling down."

"Everybody was trying to run to the door, but we we're all like, 'No, no, no.' We didn't need 50 people going outside getting hailed on."

The volunteer counsellors watched as the hail dented their cars and shattered a few rear windows.

After the storm passed, the campers put the hail to good use in their lawn-bowling games before it melted in the heat, said Kehler.

"We have a carpet ball game that we use pool balls for, and they were trying to use the hail to play afterwards … I've never seen hail that size before."

Evansburg is 100 kilometres west of Edmonton.