Oilsands camps north of Fort McMurray, which some workers had begun returning to in recent days after being forced to leave by a resurgent wildfire, have been ordered to evacuate once again.

After a challenging day for firefighters, wildfire growth expected to slow Monday evening 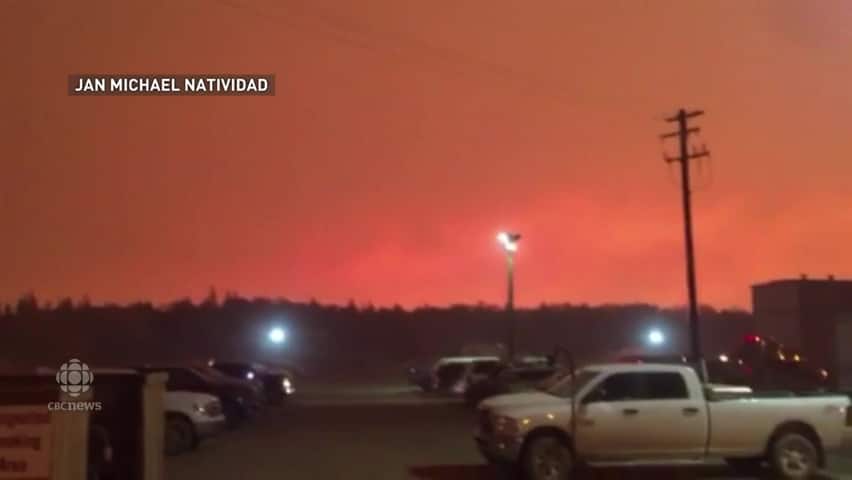 5 years ago
0:21
Jan Michael Natividad's video from the Noralta Lodge work camp north of Fort McMurray, which was evacuated Monday. 0:21

Oilsands camps north of Fort McMurray have been ordered to evacuate once again over the threat from a resurgent wildfire, forcing about 8,000 workers to leave the facilities.

A wildfire that destroyed whole sections of Fort McMurray earlier this month has forced workers to leave all camps up to Fort MacKay, around 54 kilometres north of Fort McMurray. 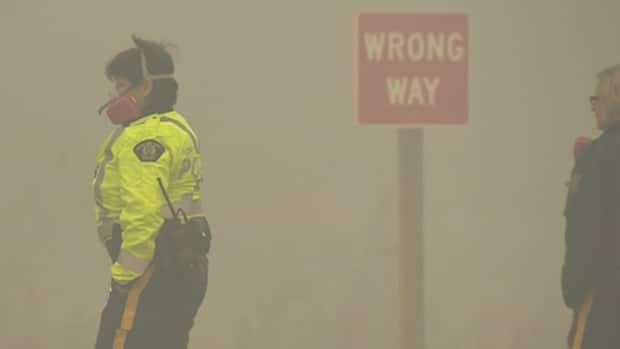 5 years ago
1:32
Workers on the run again from the threat from a resurgent wildfire, forcing about 8,000 to leave the facilities 1:32

A fire travelling at 30 to 40 metres per minute was heading north towards Tower Road, on the west edge of Fort McMurray, as of 2:30 p.m., according to a news release from the Regional Municipality of Wood Buffalo. It's expected to slow later Monday night, officials said.

Officials initially said the evacuation affected 4,000 people, but that number was doubled to 8,000 Monday night to include several more work camps north of the city.

Noralta spokeswoman Blaire McCalla said Monday the "controlled precautionary evacuation" was renewed for all camps along AOSTRA Road, including Noralta Lodge in Fort McMurray Village, the camp closest to the north edge of the city.

Camps evacuated on Monday include:

The evacuation order does not include Fort MacKay, Athabasca Camp and the Beaver River Camp. All other camps south of this area were to evacuate immediately.

Some camps may be missing from this list, according to an Alberta Emergency Alert.

Workers essential to operations have been sent farther north to Grey Wolf Lodge, which remains a safe area.

Fort McKay is not evacuating at this time.

"This is a very fluid situation and we are taking our cues from emergency responders to ensure the ongoing safety of our guests and staff," McCalla said in a statement.

'What we said would happen is happening'

The somewhat significant increase in the wildfire's growth was expected on Monday, Premier Rachel Notley said during an evening news conference.

Notley said the fire is burning northwest of the Fort McMurray neighbourhood of Timberlea, but there is a five-kilometre burned-out area between the fire and the Timberlea community. Regardless,150 to 200 firefighters are in that community keeping an eye out for embers.

We knew this would be a difficult fire day- Chad Morrison , senior wildfire manager

About 300 people, mostly utility workers restoring services in the city assembled at MacDonald Island Park for safety. Another 300 people have taken shelter in the city's hospital.

Notley said only camps that house workers for Syncrude and Suncor have been evacuated, and there is no immediate threat north of those facilities. She said officials remain confident workers can be evacuated from that area if necessary.

"What we said would happen is happening," Notley said. "It should fade out and slow down in between about eight and nine tonight."

Strong winds on Monday resulted in what he called "extreme fire behaviour." Winds are expected to shift west Monday night, which would mean more favourable conditions on Tuesday, he said.

"We knew this would be a difficult fire day," he said, adding it remains burning about 15 to 20 km south of major oilsands facilities.

"The fire will actually begin to slow here as we reach past the dinner hour."

Oilfield workers on standby at airport

Some workers evacuated Monday had arrived earlier in the day.

Before the evacuation notice was issued Monday afternoon, many oilsands workers were lined up at the Edmonton International Airport preparing to return to work camps.​​

The first charter plane left EIA on Monday for the Firebag work camp at 6:30 a.m. The last plane was scheduled for 8:30 p.m.

Suncor worker Lucy Fitzgerald was supposed to fly back to work Monday morning, before she heard about the evacuation.

"I had the call yesterday to tell me that I may not be getting into work today, because the smoke around Firebag, which is seven kilometres from our camp … apparently they had quite a bit of smoke there yesterday," Fitzgerald said.

It's a day by day thing right now, and that's all I can do. It's either that or go home and stay home, and I can't afford to do that right now.- Lucy Fitzgerald, Suncor employee

During a news conference Monday morning, Notley urged those not already in the Fort McMurray area to stay away, due to air quality so toxic it surpasses provincial measurements.

Alberta uses a scale of one to 10 to measure air quality, with 10 considered to be the highest risk.

Air quality in the Fort McMurray area on Monday morning was 38.

"Alberta Health Services has recommended that members of the public who had been previously arranging to return to the area under various requests, that they not return until those conditions improve," Notley said. 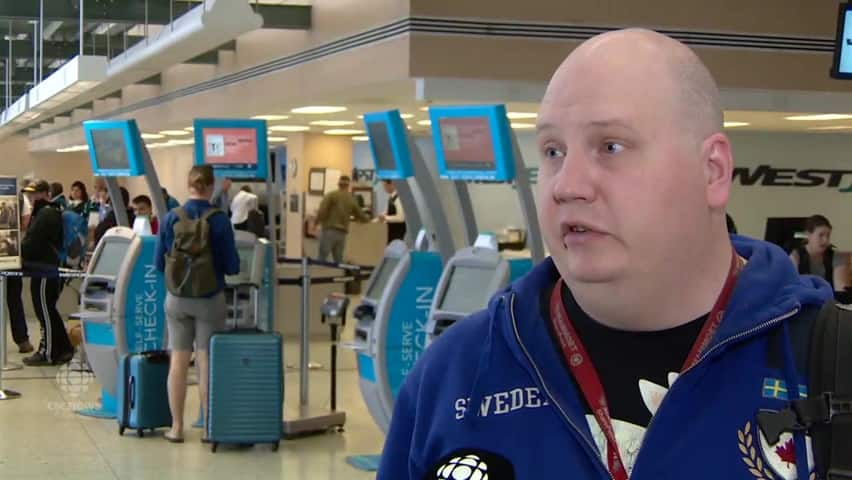 5 years ago
1:27
Fort McMurray oilsands operations are set to start up again, which means some workers are heading north once more. 1:27

But Fitzgerald, who returned home to Sydney, N.S., after she was evacuated from Fort McMurray more than a week ago, said she can't wait much longer to return to work.

"One thing after another, I know," she said. "It's a day-by-day thing right now, and that's all I can do. It's either that or go home and stay home, and I can't afford to do that right now."

SGS Canada employee Russell Gavelin was also waiting at the airport. Gavelin also works out of the Suncor site, and said he was looking forward to returning to work, and a sense of normalcy, after a hectic couple of weeks.

"We've got guys already on site taking care of our tasks. And it's working out so far so good, a couple hiccups here and there," he said.

"It's nice to have a routine, it's nice to know that my job is still there, it's going to be great to see everybody I work with ... make sure they're all OK."

Get the latest breaking news on this story and others. Download the CBC News app for iOS and Android.