Grande Prairie outreach group HIV North is in the final stages of applying for federal permission to open a mobile site for supervised drug use. 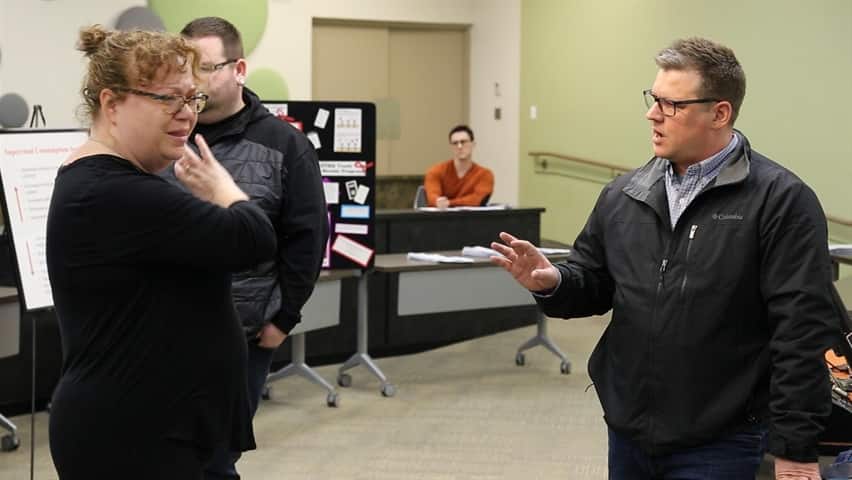 3 years ago
2:21
Grande Prairie outreach group HIV North is in the final stages of applying for federal permission to open a mobile site for supervised drug use. On April 4, people living near the proposed sites weighed in with their thoughts and concerns. 2:21

Grande Prairie outreach group HIV North is in the final stages of applying for federal permission to open a mobile site for supervised drug use.

HIV North started the process in August 2017 with a needs assessment. The final step will be community consultation.

People living within four blocks of where HIV North wants to park the mobile clinic were invited to two information sessions at the Grande Prairie Regional College, on April 4 and April 11.

The community can also weigh in online until April 15, using a survey developed specifically for Grande Prairie residents.

"What we really have to do is just understand that there are different perspectives," said Melissa Byers, executive director for HIV North.

"Just kind of take all perspectives into account," she said. "However, stay focused on the main goal, which is essentially saving lives."

The site is intended to reduce disease transmission and overdose deaths and cut down on the amount of drug paraphernalia such as needles discarded in public places.

People who want to use the service must bring their own drugs, which they can then take in a safe, sterile and supervised place. They are also offered counselling and other resources to help fight their addiction.

HIV North is proposing a mobile site so staff can move the service between two overdose hotspots in the city.

The group wants to split its service between Rotary House, a shelter in the heart of Grande Prairie, and a nearby motel popular with drug users.

Volunteers already conduct so-called "blitzes" at both locations, handing out the lifesaving drug naloxone to anyone who asks for it.

Naloxone can temporarily reverse the effects of an opioid overdose.

A supervised consumption site would go one step further in reducing deaths related to the Alberta opioid crisis, Byers said.

Roughly a dozen people who live near the proposed sites attended the first information session on Wednesday.

Lisa Teichroeb lost her son to an overdose eight months ago. Maxwell Teichroeb, 20, was staying at Rotary House before he died.

"He overdosed in the morning in someone's backyard, because he didn't have a place to go," Teichroeb said. "If he had a place to go, I really believe that he would have used it, and he would still be alive."

She lives near one of the proposed locations and said she attended Wednesday's meeting to share her story with people worried about having a supervised drug consumption site in the neighbourhood.

"My son's life was important," Teichroeb said. "He comes from a good family and he was well loved and well looked after, but addiction is addiction and it affects all of us."

Teichroeb talked about her son's death with Jon MacDonald, who attended the meeting with his wife and their two toddlers.

His home is adjacent to one of the proposed sites. MacDonald said he is not against supervised drug consumption in Grande Prairie but worries about how and where it would operate.

"There's a lot of positive benefits to the actual service, not just to the users of the service but for the community in general," MacDonald said.

"But I think it's important that we have ... guidance based on the locations they choose to operate in."

He urged Byers and her organization to take the time necessary to address community concerns and to work with the city on land-use bylaws, before moving ahead with the site.

Jean Beauvais listened to MacDonald's points from a seat at the back of the room. He used to live at Rotary House, after losing his oilpatch job several years ago.

He said he has administered naloxone to more than one friend at the shelter, most recently last week.

Planning needs to be balanced with the urgency of the mounting death toll, he said.

"There's people dying every day because of it," Beauvais said. "It's not going to stop people (from using drugs) but it's just going to get safer."

The second meeting about the proposed sites will be held at the college on April 11, from 5 p.m. to 7 p.m.

HIV North will use the feedback to write a report that includes suggestions for how to mitigate community concerns.

The report will be submitted by the end of April as part of the group's request for a federal exemption to open a mobile supervised consumption site.

Byers said she hopes for a response from Ottawa by June.

RCMP superintendent: 'I agree with both sides'

If the mobile clinic is approved, HIV North will work with the city and the RCMP to develop safety measures for nearby communities.

Officers have run projects targeting higher rates of drug-related crime and sexual exploitation in both areas.

McKenna said he has sympathy for people who worry about living near a supervised consumption site, but added that the number of opioid overdoses in the community has hit a critical point.

The city last year had the highest rate of fentanyl-related overdose deaths in the province, according to Alberta Health.

"I agree with both sides in this, but we have to navigate our way forward," McKenna said. "Having a safe consumption site, that's only one little piece of the puzzle. And I think the bigger piece is getting people into recovery."

Supervised consumption sites are a Band-Aid for the problems caused by drug addiction, he said, citing increased rates of property crime and domestic disturbances.

"The only real solution is for people to get off the substances, but that takes a lot of time and it also takes money," he said. "In the meantime, we don't want people dying."

RCMP will develop strategies based on trends officers see in the community, McKenna said.

"If that attracts criminality in those areas, then we'll be focusing on it."

The site won't stop officers from targeting drug abuse in the community. Police will focus on drug dealers rather than drug users, McKenna said.

"Whether you drug traffic half a block away from the safe consumption centre or a mile away, it doesn't matter to us. There's zero tolerance."

Grande Prairie's would be the fourth mobile drug-consumption site in Canada, with a fifth proposed for Calgary.