It's a 100,000-sq.-ft. warehouse where Edmonton shoppers are snagging toys, clothes, furniture and more all by the pound.

Anneke Wieleng is on a treasure hunt.

Wieleng is pawing through bins at the Goodwill Impact Centre and Outlet Store looking for clothes and toys for her great- grandchildren.

The 100,000 sq.ft. warehouse and retail space, at 114th Avenue and 168th Street, is the last stop for unsold items from Goodwill stores in the Edmonton region.

It's where Wieleng and other customers get a chance to pore through the items and pay by the pound for their finds. 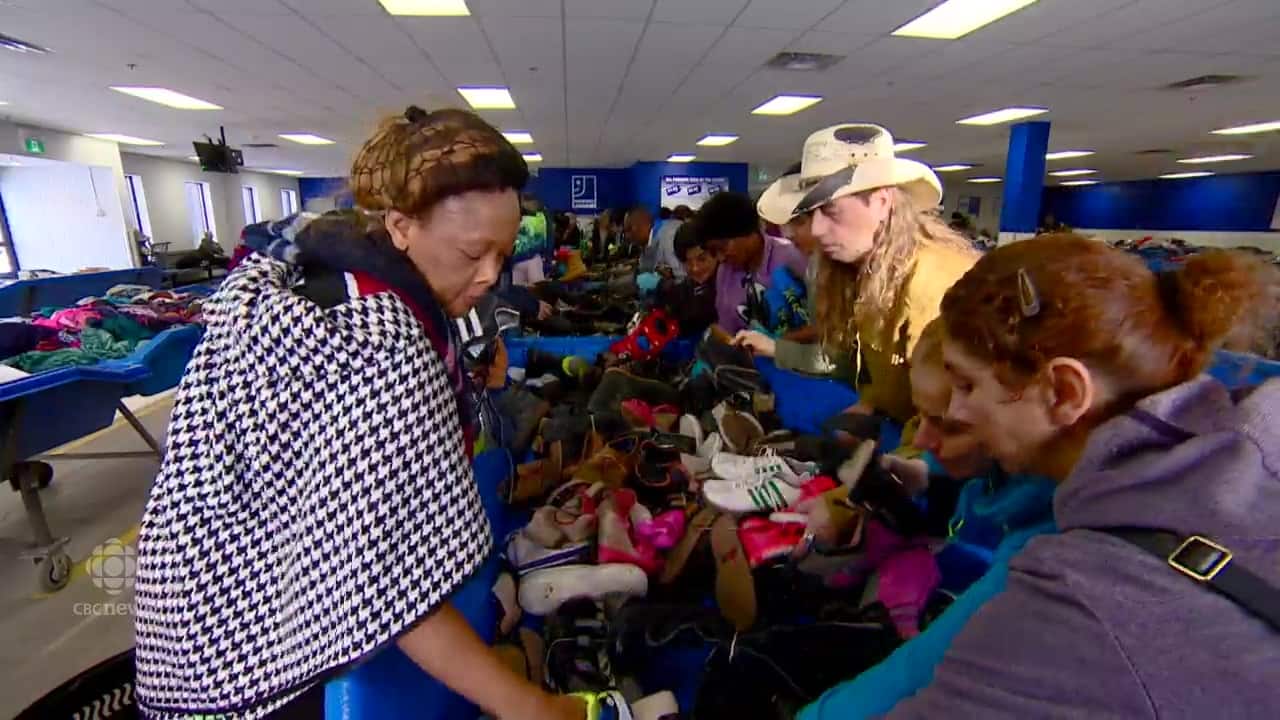 'Every 25 minutes our customers have new merchandise'

1 year ago
2:48
Take a tour of Edmonton's Goodwill Impact Centre with director of sustainability and innovation Mortimer Capriles. 2:48

Where shoppers see affordable shoes, furniture and household items, Dale Monaghan sees a "dream and vision for a centre of excellence."

Thirty per cent of Goodwill Alberta's 800 workers report having some form of disability, Monaghan said.

Goodwill Alberta is setting records at all levels and is eyeing expansion into Calgary, hoping to add an impact centre within two years he said.

You can see more from the Goodwill Impact Centre and Outlet Store at 2 p.m. on Sunday and 11 a.m. on Monday on CBC TV and CBC GEM.

He points proudly to Alberta Goodwill's recent Emerald Award perched on a shelf.

For three decades the Alberta Emerald Foundation has been recognizing green initiatives and executive director Gregory Caswell believes the Edmonton Impact Centre has raised the bar for environmental practices in the industry.

"They've developed many different pathways and programs that utilize different materials that are coming to the Goodwill, and finding ways to turn them into reusable items, recyclable items and ways to generate income for their nonprofit," Caswell said.

He mentions Goodwill's partnership with local hotels which take used towels and turn them into cleaning clothes.

"Something very moving as well is the many books they have come through their doors," Caswell said. "They've created literacy programs using ones that haven't been sold in their stores. There's lots of really amazing things going on."

Mortimer Capriles, director of sustainability and innovation for Goodwill Alberta, loves to see shoppers coming through the doors.

"When you buy here, you're automatically diverting these items from the landfill and that is why this is such a great concept that we have in place in Edmonton."

But if the bargain hunters don't snap the items up, Capriles points to the centre's robust recycle, reuse, repurpose operation, such as the one for hard plastics.

"All plastics that didn't sell in the outlet store, they're going to be granulated."

The material is sent to a company in Lethbridge to be made into park benches, Capriles said.

"Ninety per cent of the items we receive at the Impact Centre are being diverted from the landfill and we're really proud of that fact," he said.