Garage suites are growing in popularity in Edmonton, and many tenants are friends or family members of the owners.

More than 100 development permits issued for garage suites since 2015 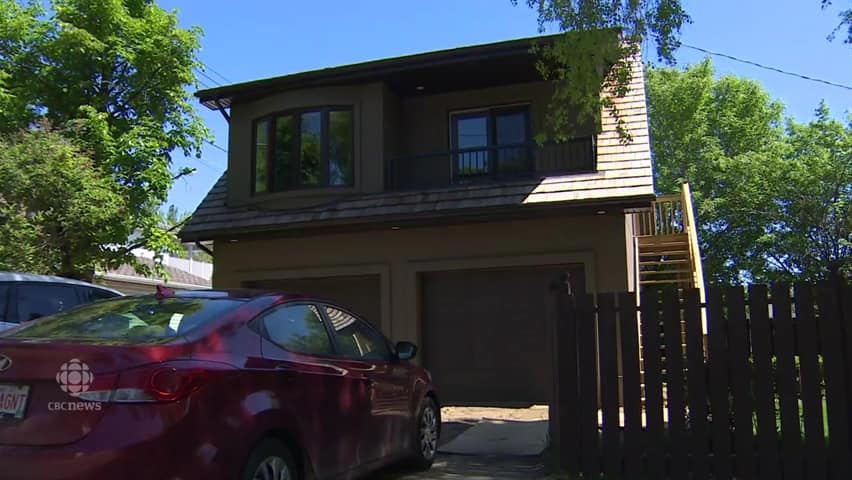 4 years agoVideo
1:36
The CBC's Travis McEwan looks at the growing garage suite trend in Edmonton, and who's living in them. 1:36

Wonder who's living in that new garage suite down the alley? Chances are they're friends or family of the property owners.

It's a trend that researcher Ashley Salvador has noticed over the past year.

Salvador surveyed garage suite owners and tenants across Edmonton to see who was living in them and why. She says half are using a concept called voluntary affordability.

"You're charging low to ultra-low rent for the person living in the suite for relationship reasons," Salvador said.

"If it's your senior parent living in the suite, you're not going to charge them super-high rents."

Brian Finley and his wife, Laura, have been building a garage suite in the backyard of their property in the Highlands neighbourhood. With the exception of the driveway, the 600-square-foot suite above the double garage is pretty much complete and ready for the tenant to move in.

That tenant is Finley's 25-year-old stepson, Mackenzie. Mackenzie has a mild learning disability and works a job sorting kegs at a warehouse. His own living space will give him more independence.

The Finley family had been looking at options to help find Mackenzie a new place, but building a garage suite from scratch and having him next door was ultimately the best option.

"We wanted to make sure he was in a position where he could live on his own if he wanted to," Finley said. "By the same token he was close to everything."

The total cost of building the suite will be about $200,000, a sum Finley said is doable for a separate home for his stepson.

"That's really affordable when you think about the fact that there's no condo fees and everything is on a separate system. So, he's basically set as far as this unit goes," Finley said.

In the Ritchie neighbourhood, recent retiree Grace Waskiewicz, 65, lives in a garage suite on a property with the home of her son and daughter-in-law.

She moved into the suite in October, before selling her house.

"My house was not free of mortgage. Life would be really stretching the budget. It's much easier for me to be here. I invested with my son and daughter-in-law," she said.

"I have the closeness of the family. That gives me comfort, knowing that if something happens they are close by."

In 2015, the city issued 29 development permits for garage suites. That nearly doubled in 2016, with 52 permits issued.

Even more permits are expected this year, with 22 issued in the first four months of 2017.

"Undoubtedly exponential growth, especially since 2015," she said. "In April 2015 [the city] actually changed the regulations so that garage suites are allowed on essentially all lots in the city.

"Since then, there's been a huge uptake. People are really taking advantage of those loosened restrictions."

Later this year, city council is expected to look at the possibility of allowing larger garage suites to be built.