Hafþór Júlíus Björnsson, better known as ‘The Mountain,’ is in the oilsands capital for Saturday’s Strongman Competition and Classic Car Show.

Game of Thrones star Hafþór Júlíus Björnsson, better known on the series as "The Mountain," says he eats constantly.

And so, when he stopped by Chez Max's, Fort McMurray's local Jamaican restaurant, on Friday, the Icelandic star and two other strongmen demolished a crowded table of food.

That included 20 beef tenderloins, a half-dozen fried eggs, three bowls of Jamaican rice and peas, a side of jerk chicken, oxtail stew and curry goat.

"It went straight to my muscles," Björnsson said, tensing his biceps. "I eat every two hours."

The three are in the oilsands capital for Saturday's Strongman Competition and Classic Car Show. Teams will register for strength challenges hosted by the Fort McMurray Strongman Association.

Björnsson will appear as a celebrity guest and Ver Magnússon will referee the event. The money raised will go to the Fort McMurray Food Bank Association.

When star-struck restaurant customers politely interrupted and asked for a picture, the Icelandic television star obliged with a smile, dwarfing his fans in an embrace of muscle.

When he left the restaurant, he took six take-out containers of the restaurant's ready-to-go meals. Co-owner Jeff Peddle laughed and said Björnsson told him the food would only last him till 2 p.m.

From strongman to actor

Björnsson said fans most often recognize him from a Game of Thrones battle with the Red Viper, Pedro Pascal. "The Mountain" comes from behind and wins with a gory finish where he crushes the head of his opponent like a watermelon.

"It's the scene that everyone talks about as the best fight scene in a TV series of all-time," Björnsson said. 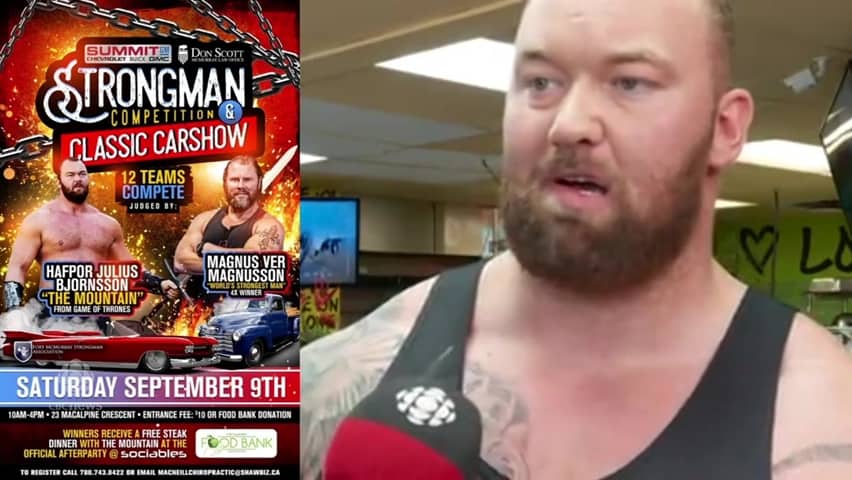 Game of Thrones strongman reveals how he got into acting

3 years ago
0:57
Actor and strongman Hafþór Júlíus Björnsson talks about his role on the television series Game of Thrones ahead of the Fort McMurrray Strongman Competition 0:57

The 28-year-old said the scene took weeks of work with a specialist sword teacher in Belfast before shooting in Croatia.

As the latest season of Game of Thrones wraps up, Björnsson said he hopes his acting career continues to take off.

"It wasn't a goal for me to be popular or famous. It just kind of just happened to me," Björnsson said. "I love it. Probably an equal amount as Strongman."