In what's believed to be a first for Alberta, a bank is using biometric technology to help homeless people manage their money.

Accessing your bank account by a retina scan or fingerprint may sound like something from the future, but the cutting-edge technology is already in Edmonton.

Homeless people and those living in poverty are using biometric technology to manage their money, thanks to Four Directions Financial, a partnership between Boyle Street Community Services and Alberta Treasury Branches.

"It just makes me feel better inside," said Bryan Kenny, who has spent much of his life living on the street and is one of the bank's first clients. "This bank is derived for people like myself."

Kenny, 47, said he often felt judged when visiting banks in the past. He's also watched friends get turned away from banks when they are unable to produce ID or provide a home address. 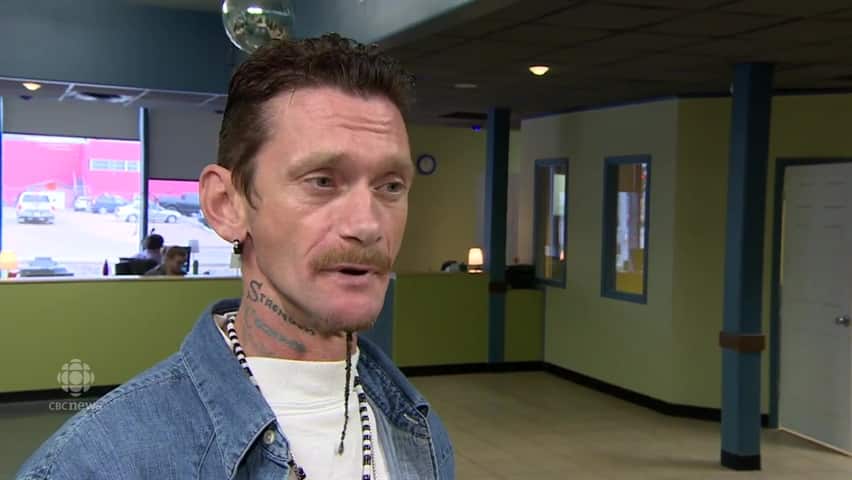 Living on the street with everything in a backpack means if it's lost or stolen, so is a person's ID.

The cost of replacing that ID is yet another hurdle.

"That's what got me here because I was having the ID problems to start with," Kenny said.

Seeing so many clients stuck paying commission to payday lenders in order to cash cheques, Boyle Street has been trying to partner with a bank for years.

"In this situation it was a perfect solution because it did away with the need for identification," said Dave Mowat, president and CEO of ATB Financial. "A person comes in and they either look in with their eye or they put their finger on it and that's them."

The biometric device, into which clients peer for a reading of their retina, resembles a virtual-reality gaming headset.

A small pad on the device reads fingerprints.

Within seconds, the person's bank account pops up on the teller's screen.

"It really allows people to make banking work for them instead of them not really fitting into the system," said Mowat who believes his bank is the first in Alberta to use the technology.

Four Directions Financial allows people to open an account with one piece of identification and helps them replace any other forms of ID they may have lost.

Now instead of feeling shunned, Kenny said he feels accepted at Four Directions where staff know his name.

With addictions behind him, Kenny works at Boyle Street Community Services as part of the Downtown Proud! team which keeps city streets clean.

In control of his life and his money, he now has ID and a bank card so he doesn't need to use the biometric technology.

But about 65 per cent of the more than 500 clients at the bank use the high-tech scanning to access their money.

'It's made their money safe'

"A lot of people who bank with us now would get a cheque from the government and they would cash it and they might be robbed. We know of many cases where people follow people to the cheque-cashing places."

Operating for about a year now, Four Directions Financial is housed in the same building as Boyle Street Community Services at 101st Street and 105th Avenue.

It's name, approach and range of services, as well as the blue and green decor, was decided on in discussions with community members who were keen to see a reflection of Indigenous culture.

"It's made folk who have felt outside of society a part of society and I think that has made a lot of people feel good about themselves," Daly said.

Instead of cashing cheques and carrying around large amounts of money, Kenny is now beginning to save.

"Instead of having a pocket full of money, I can have it in a bank account and it gives me security," he said.

All three agree that getting people accustomed to banking and saving money is one of the first steps in the climb out of poverty.