The Wood Buffalo region has recorded its first death related to spring flooding that has forced thousands of people from their homes in and around Fort McMurray, Alta.

A Fort McKay First Nation man is dead after being injured in the Athabasca River during major flooding that forced thousands of people from their homes in and around Fort McMurray, Alta.

Don Scott, the mayor of the Regional Municipality of Wood Buffalo, confirmed the fatality during a news conference Wednesday morning.

It happened near Fort McKay, a community located at the confluence of the Athabasca and MacKay rivers about 55 kilometres north of Fort McMurray.

"I reached out the community where this individual lived, and I tried to connect with the family and let them know if they need anything that they should please reach out," he said.

"We were all very saddened to hear that news."

The RCMP said two men were on ATVs on a trail when water levels suddenly rose and they ended up in the Athabasca River. The men held on to a submerged log and were able to phone for help, the RCMP said in a statement Wednesday evening.

One man was taken to the Northern Lights Regional Health Centre by helicopter in critical condition, while the other was taken by ambulance. The first man was later pronounced dead at the hospital, RCMP said.

Fort McKay First Nation confirmed in a news release that the person who died was a man from their community.

"Around 4:30 p.m. yesterday afternoon we were informed that two of our community members were in distress near their family trapping grounds, approximately 50 km north of Fort McKay, along the Athabasca River," said the release.

"We are deeply saddened by this passing and are supporting the family and our members through this situation," the release said.

The region has been dealing with a dual crisis — the pandemic and a flood that has forced nearly 13,000 people from their homes

On March 20, the municipality declared a local state of emergency to deal with the COVID-19 pandemic. Within a few weeks, an oilsands work camp north of the city was contending with an outbreak.

Then on Sunday, the flooding began.

Every spring, residents anxiously watch the spring thaw in the five local rivers, which are prone to ice jams. This time, the ice jam — which initially stretched about 25 kilometres long — formed in the Athabasca River, effectively damming the Clearwater River, which runs east of downtown.

In a matter of hours, the ice raised water levels along the Athabasca and Clearwater by between 4.5 and 6 metres and the water began overflowing the banks, turning streets into rivers.

As of Wednesday morning, almost every street in the lower townsite remains under mandatory evacuation and access to downtown is cut off. Residents who leave are not being allowed to return.

A voluntary evacuation notice for residents of Grayling Terrace was rescinded Tuesday night.

More than 6,000 people have registered at two drive-thru evacuation centres and the municipality said that number is expected to grow. Officials said evacuees are being put up in hotels and work camps where they can have their own space.

On Tuesday, residents involved with the flood mitigation effort were granted exemptions to some provincial health directives intended to slow the spread of COVID-19.

Volunteers and workers involved in sandbagging, pumping and other flood-prevention work will be allowed to gather outside in groups of 15 people or more and will not be required to keep a minimum distance of two metres apart.

Only residents of the Regional Municipality of Wood Buffalo involved in the flood mitigation effort are being granted the exemptions, Premier Jason Kenney wrote on his Twitter account Tuesday night.

The exemption order, granted Tuesday by Dr. Deena Hinshaw, Alberta's chief medical officer of health, states all other public health orders are still in effect and recommends those working under the exemption wear appropriate personal protective equipment when possible.

Kenney said masks would be shipped to the northern Alberta city. He said the exemptions were implemented after some people expressed concern about physical distancing during the flood.

He shared a video showing a group of volunteers, working side by side to build a berm of sandbags around the Northern Lights Regional Health Centre, the only building in downtown Fort McMurray that has been spared from evacuation orders.

Joseph Gardiner was woken up at 4 a.m. Monday by RCMP officers telling residents they had 20 minutes to evacuate from the downtown apartment building where he lives on the third floor.

Gardiner is staying with his brother uptown, away from the flood waters.

Like many in Fort McMurray, he is accustomed to life in a crisis. He worked as a first responder during the wildfire in 2016, servicing fire trucks and other emergency vehicles at a garage downtown.

The pandemic has added another layer of anxiety for evacuees, he said.

"It's really strange because you have the masks, the evacuation and then you got all these people getting together in a parking lot to register," Gardiner said as he waited in line at the grocery store.

"They did it really smart and kept us in cars and everything. It's more so the lineups in the grocery stores now that get chaotic and social distancing doesn't happen too much.

"I'm on the third floor, so hopefully I will be OK. It's just a matter of when we will be allowed to return." 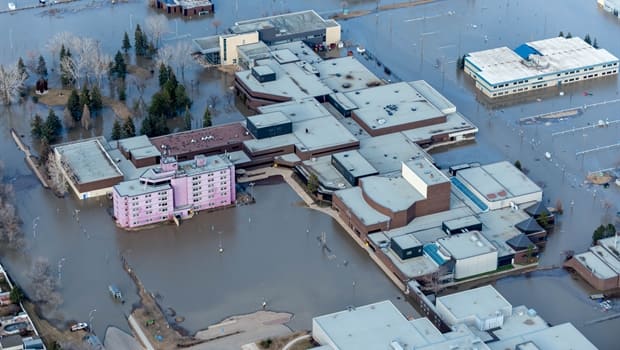 9 months agoVideo
7:20
Brian Jean, once the leader of Alberta's Wildrose Party, is facing the loss of his second home in four years because of natural disasters in Fort McMurray. 7:20

'Not in the home stretch'

Water levels on the Clearwater, Athabasca and Hangingstone rivers continue to fluctuate.

Colleen Walford, a river forecaster with Alberta Environment, said a monitoring flight just before noon Tuesday determined the ice jam had shortened by about one kilometre and was melting.

But officials with the Regional Municipality of Wood Buffalo said it remains a critical situation.

"We are not in the home stretch yet," Scott Davis, director of emergency management, told reporters.

Data shows the Clearwater River was still rising and the Athabasca River had only dropped by about four centimetres.

On Tuesday, the municipality urged patience. Emergency workers will continue to survey the damage by ground, air and boat, in the coming days.

"Understandably, many businesses and homeowners are keen to understand the damage from flooding," municipal officials wrote in a community update. "However, it is important to understand that re-entry isn't possible until it is safe to be in these areas."

'Those homes are gone, they're gone again'

Keith McGrath, a councillor with the regional municipality who was on council when a wildfire devastated the community in 2016, said the difficult work of repairing the damage cannot truly begin until the ice jam breaks loose.

"There is no big actual rise, but the problem is the water ain't moving," McGrath said in an interview Wednesday.

"We need to get that jam out of the way and let the water flow and start to dissipate so we can get people back into their homes and start the recovery. And it's no small feat. "

He said many people have lost their homes for a second time, first to the fire and now to the flood.

"It's really disheartening. People have built brand-new homes in Waterways and Draper and now, this morning, those homes are gone, they're gone again," he said.

"My heart goes out to those people the most. You don't know until you live it, and this has been a triple whammy."

McGrath said first responders and an army of volunteers are working relentlessly to minimize the damage and care for evacuees.

He hopes additional workers from the province will ensure they can eventually get some relief.

"It's a sombre mood, but I can tell you, there's thousands of people here who have come out in droves to sandbag, to bring food, to bring water. It's an around-the-clock operation.

"You've got to take care of the volunteers, because at the end of the day, it's not the politicians that make it happen, it's the community and the people that work on the front lines."

Longtime Fort McMurray resident Meghan MacDonald was one of thousands who fled the city during the fire.

An educational assistant, MacDonald was recently laid off but considers herself lucky. Her home hasn't flooded.

She has been collecting and delivering donations for evacuees and others who are struggling to afford to eat.

With the city's food bank and many grocery stores flooded, people are growing concerned about food security.

"There's been a huge need all over the city," MacDonald said. "There are lineups for days outside the grocery stores … it just snowballed really quickly."

People are shopping out of panic, she said. And a boil water advisory covering much of the municipality has only made it worse.

Essentials such as baby formula and bottled water have become suddenly difficult to find.

"When the floods started and everybody was panic-buying water yesterday, you could not get water in town," she said.

"Half of our grocery stores are downtown and there's no access to them. We're cut in half."

People in Fort McMurray have already been through so much and their anxiety is growing, MacDonald said.

At a time when many have lost their jobs due to the drop in oil prices or the pandemic, it's hard to imagine how some families will cope, she said.

"There's people who have not financially recovered from the fires that are about to lose everything all over again."

Former MP and MLA Brian Jean, who lost a home in the 2016 wildfire, said his almost-finished new house was under three metres of water.

His wife and new baby have gone to Edmonton. Jean has remained behind with his eldest son in an attempt to salvage his late mother's house, which is also under threat. He's been sleeping in his truck.

His brother and two nephews suspect their newly rebuilt homes are also under water.

WATCH | Former MP and MLA Brian Jean discusses how the flooding has affected his family and the community: 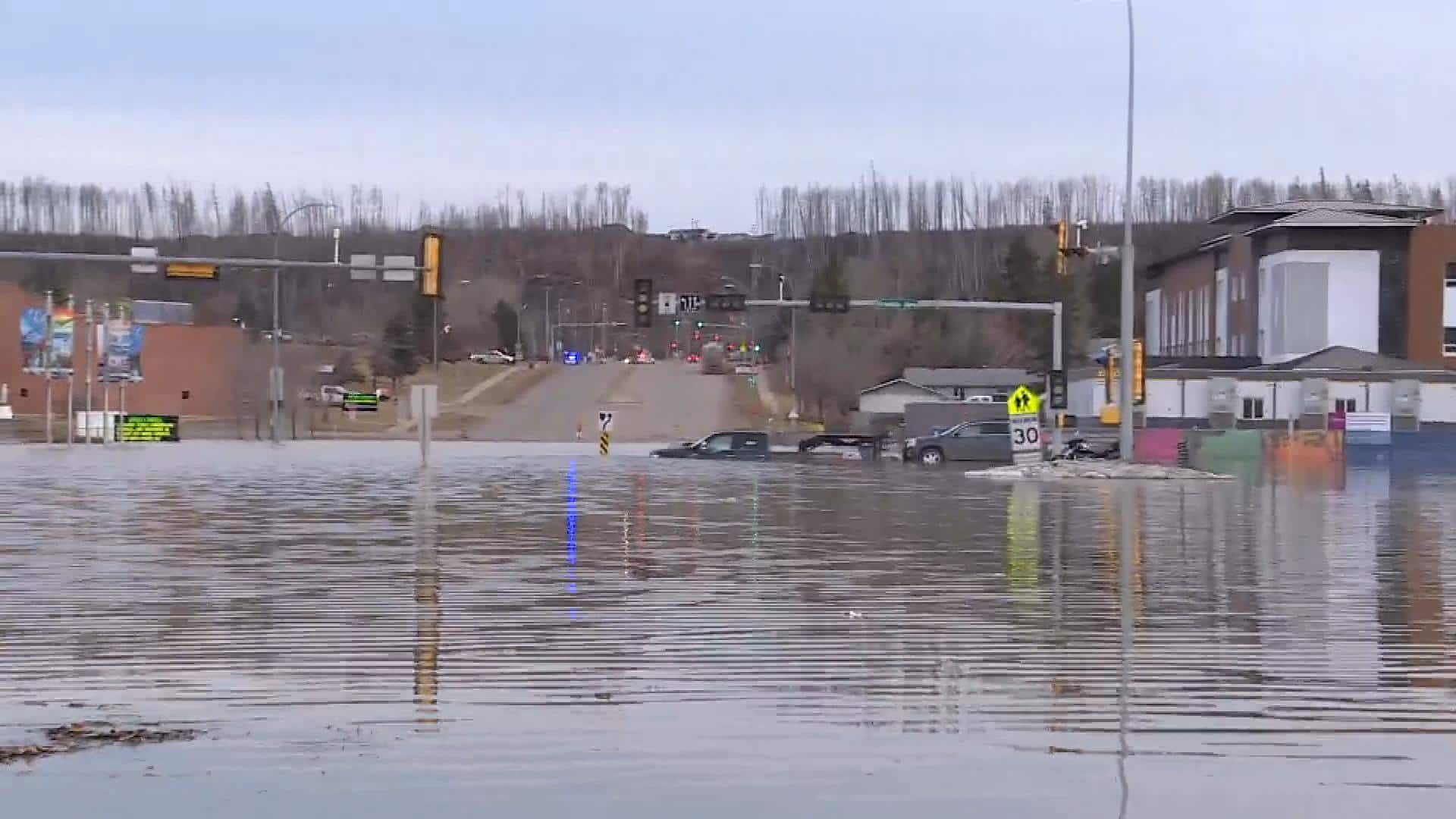 Jean said Fort McMurray will always be home, and he will rebuild, but he fears others will give up on the community.

"You know that's the shame of it all is that, truly, people can only take so much," he said.

"Fort McMurray, it's a great place to live. It's an incredible place to live. But a lot of people, you kick them a couple of times they're not going to come back for more."

He's heard of people who, even after surviving the fire, didn't have the proper property insurance.

"I will tell you I've heard so many stories after the fire that would break anyone's heart," he said.

"People wouldn't expect a disaster to destroy them twice."