Floodwaters that have forced thousands of people from their homes in northern Alberta will only be resolved when warmer weather melts massive ice jams on rivers, Environment Minister Jason Nixon said Tuesday.

Floodwaters that have forced thousands of people from their homes in northern Alberta will only be resolved when warmer weather melts massive ice jams on rivers, Environment Minister Jason Nixon said Tuesday.

"Ice-jam floods are very unpredictable and conditions can change quickly with little warning," Nixon told a news conference in Edmonton. "There is no reasonable engineering solution to unlock the ice jams at this point. We have to rely on warm weather to soften the ice."

Some 13,000 people, mostly from Fort McMurray, have been evacuated from their homes because of flooding caused by ice jams on the Athabasca, Clearwater and Peace rivers.

Don Scott, mayor of the Regional Municipality of Wood Buffalo, told Tuesday's news conference he had consulted with Premier Jason Kenney Monday about the possibility of military intervention to help break up the ice, even using CF18 jet fighters and explosives. But those thoughts were ruled out, Scott said.

"There's been a lot of suggestions but none of them are apparently workable in this situation" he said. "So I was grateful for the expertise that was provided. At least people understand what the options are."

​In a video posted to social media on Monday, Kenney noted, "apparently that was a tactic used back in 1972 and our river experts have looked at that very closely and are saying that would just not work in this situation. It would not displace the ice, it would just create tighter jams in some places."

On Monday, Scott posted on social media that he had requested federal assistance, including military support. He later clarified it had not been formally requested.

"In an emergency situation like this, it's the director of emergency management who would make the call," Scott said earlier Tuesday.

He said talks with Kenney are continuing and that the municipality has made a series of "large asks," including more equipment and more RCMP officers. Scott remains hopeful the community will get the help it needs.

"[Kenney] said he would not stand in the way of any request this municipality needs, we would just need to provide the details," Scott said. "I understand it's something that our team is taking into account, whether military support is required."

Scott said he spoke to federal Public Safety Minister Bill Blair on Monday. Blair told him Ottawa will help if it gets a request from the province, he said.

At his briefing Tuesday morning in Ottawa, Prime Minister Justin Trudeau said the federal government is ready to provide assistance.

"This morning our thoughts go out to those of you who live in Fort McMurray as you deal with spring flooding," Trudeau said. "We stand ready to help. To all the first responders and volunteers out there placing sandbags, including around the hospital, thank you."

With the exception of emergency crews who travelled the streets by boat, Fort McMurray's downtown remained deserted Tuesday morning as rivers jammed with ice continued to overflow their banks.

About 13,000 residents have been forced to leave their homes since flooding began on Sunday, according to the premier's office, as a result of the spring ice breakup on the Athabasca and Clearwater rivers in Fort McMurray and the Peace River in Mackenzie County. Evacuation orders have also forced people from their homes on the Tallcree First Nation at Beaver Ranch.

Officials had been monitoring ice on the Athabasca for several days. It let loose early Sunday forming an ice jam near Fort McMurray. 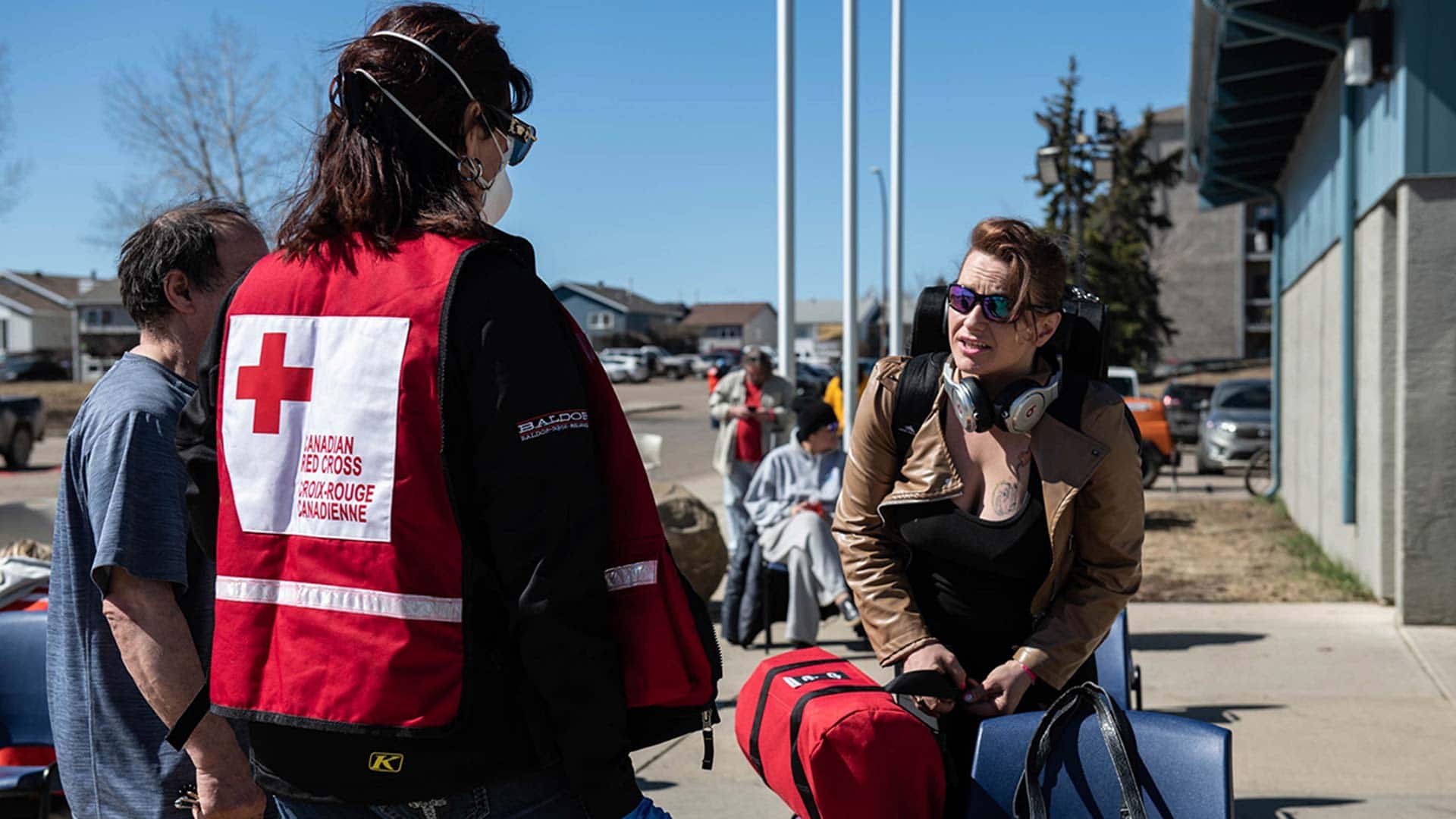 10 months ago
1:54
Severe flooding in Fort McMurray, Alta., adds to a string of disasters for residents, many of whom also had homes damaged in the 2016 wildfires. 1:54

Water and ice from the Athabasca River pushed up the Clearwater River, raising water levels in those rivers between 4.5 metres and 6 metres at Fort McMurray.

According to the province, the ice jam on the Athabasca River is 24 kilometres long. And while the ice in the jam has darkened significantly, indicating it is melting, there are three ways it will come to an end, said Colleen Walford, river forecaster with Alberta Environment and Parks

The province said Tuesday the breaking ice front on the Peace River has reached Fort Vermilion and is continuing to move through town. The ice front is in place between Beaver Ranch and the downstream end of Fort Vermilion, causing flooding in both locations.

When last observed Monday morning, the total length of the ice jam and advancing ice on the Peace River was about 38 kilometres.

Josh Knelson, reeve of Mackenzie County, said it has been impossible to tackle the Peace River ice with sandbagging or other efforts.

"When you get two- to four-foot thick chunks of ice that are who knows how big, it's pretty hard to take and set anything up," Knelson said a Tuesday's news conference.

"It's so massive there was no realistic way right now that we could ... sandbag it or quickly put up any tiger dams or what have you.

"It is merely pretty much begging the good Lord to have some mercy on us and hope for the water to recede so that we can get to work and clean this beautiful community back up."

The entire lower townsite in Fort McMurray, with the exception of a single neighbourhood and the community's only hospital, has been placed under mandatory evacuation. Access to the downtown was closed on Monday, and residents who left the area were prohibited from returning.

Residents of the Grayling Terrace neighbourhood have so far avoided mandatory evacuation orders but will have their gas service cut this morning. Heat or hot water will not be available for residents who choose not to evacuate.

Officials have said the Northern Lights Regional Health Centre is not under threat but volunteers worked through the night building a berm of white sandbags along the eastern edge of the property.

Scott called on evacuees to co-operate with emergency officials and commended them on the calm shown during the evacuation process.

"This is the one-in-a-100-year flood that people talk about when they're doing planning. It's just unfortunately this year on top of the COVID pandemic."

Anyone who travels into restricted areas put themselves and first responders at risk, he said.

"This is a critical situation at a critical time," Davis said Tuesday.

"Everyone needs to take it seriously. Water levels on the Clearwater are still rising.

"What some don't realize is that there are electrical [hazards] and contaminated waters that can threaten your safety."

An emergency registration centre has been set up at the Oil Sands Discovery Centre about seven kilometres south of Fort McMurray. As of noon MT Monday, around 5,000 people had registered, a number that was expected to grow as rolling evacuation orders were issued throughout the day.

By Monday, a second registration centre had been established at the Casman Centre, a local hockey rink. Evacuees who didn't require immediate assistance were being asked not to report to the local registration centres to due the high volume of people in need.

"It's been devastating for the community," said Scott said in a video posted to social media on Monday.

"We had a significant number of businesses in our downtown that will not be reopening for some time and a lot of houses of people that I know, they're telling me that their basements are completely flooded so it's going to be a real challenge."

With local hotels nearing capacity, the municipality was preparing to house evacuees in oilsands work camps. At least 60 people had to stay overnight at the Casman arena but were being kept in separate rooms.