Scientists working in the burned forests surrounding Fort McMurray are switching gears — they're opting for fat bikes instead of ATVs to get around. 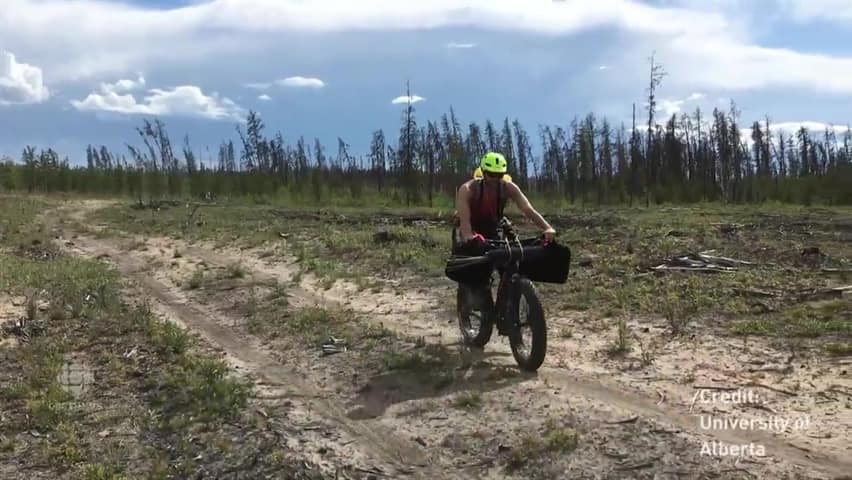 University of Alberta researchers use fat bikes after ATV ban

4 years agoVideo
0:36
Normally these researchers would be using ATVs. But after the Fort McMurray wildfire, the students switched to fat bikes to maneuver the terrain. 0:36

Scientists working in the burned forests surrounding Fort McMurray are switching gears — they're opting for fat bikes instead of ATVs to get around.

ATVs are known to spark fires in dry conditions, and after a wildfire forced almost 90,000 people out of their homes in May, a ban was put in place on their use.

That meant a team of University of Alberta scientists, accustomed to riding ATVs while doing research in the surrounding boreal forest, had to think outside the box.

The team is studying the common nighthawk, a threatened species. Their study site is north of Fort McMurray in an area covered in sandy shoals. Most researchers use ATVs to get around the area because of the rough terrain.

"I joked, 'Maybe we can use bikes,' " researcher Elly Knight said. "And then it occurred to me that actually fat bikes, the bikes that most Albertans use in the winter, some of the earlier ones were actually designed for sand.

"The wide tires mean you don't sink, you just float over it."

This pushed us to get creative, and I think we really stepped up to the challenge.- Elly Knight, University of Alberta researcher

The team lost equipment in the wildfire, so they had no money to buy bikes. So Knight hopped on her road bike and visited some bike shops in Edmonton. To her surprise, they were willing to help the scientists.

"United Cycle and Hardcore Bikes both said, 'Hey, we got a couple bikes that we aren't using over the summer, why don't you take them out?' " Knight said.

"This was a week before we left for the field season, so it was an incredibly generous offer."

This summer, the researchers found the bikes worked incredibly well. Although they took more effort to ride than an ATV, the bikes floated over the sandy areas, as hoped. And while ATV's are loud and disturb wildlife, bikes cut the group's noise pollution down to almost nothing.

They were easier to maintain, since fixing a flat tire or a loose chain is a smaller job than repairing an ATV motor. The team estimates they saved more than 400 litres of gas by using the fat bikes this summer, Knight said in a blog post.

While the ATV ban was eventually lifted, the researchers hope to use the fat bikes instead again next summer.

"This pushed us to get creative, and I think we really stepped up to the challenge," Knight said.

"Regardless of whether there's an ATV ban in place, fat bikes are more sustainable, not to mention easier to maintain, safer, and more fun."