Fire officials say the Fort McMurray wildfire is still spreading and is so massive that only a significant amount of rain can bring it under control. There is still is no timeline for residents to be allowed back into their homes. The Alberta government stresses fighting the fire is still the first priority.

Fire officials say the Fort McMurray wildfire is still spreading and is so massive that only a significant amount of rain can bring it under control.

Wind gusts of 40 to 70 km/h were expected in the region Sunday, and possibly light rain, as part of a cold front that's moving into northern Alberta.

The winds will help fuel the flames and what little moisture there is should not bring much relief to those battling the fire.

"It certainly will increase in size today, and it's still listed as out of control and the conditions are still very dry. We do have some difficult weather, some interesting weather, coming up," said Matthew Anderson, wildfire information officer with Alberta Agriculture, speaking from Edmonton on Sunday.

"There's another cold front coming through and ahead of that front it's going to be very gusty, so this morning that could cause some significant growth as the winds shift and move through," he told CBC News.

"However, behind it, it's bringing cooler temperatures, at least by 10 degrees, perhaps dropping, and the humidity is increasing as well."

Anderson it's not uncommon for a fire of this size to burn for months.

"There are a lot of hotspots and the entire area that is affected, the size is double the size of Calgary, will have to be checked by crews ... so it's going to be quite a long process and a lot of gruelling work," he said.

"We would need a significant amount of precipitation to really help to bring things under control a bit more," Anderson said, adding what little rain is expected may reach the fire zone or just fall farther north.

The province's meteorology branch predicts a chance of a small amount of snow on Tuesday or Wednesday because of the approaching cold air mass.

The wildfire, which began May 1 and engulfed neighbourhoods in and around Fort McMurray, has forced more than 80,000 people to evacuate their homes. The blaze now covers more than 2,000 square kilometres. Flames have destroyed about 1,600 structures, feeding off extremely dry boreal forest.

Almost 10,000 thousand people displaced by the fire have gone to Edmonton. Many are with family or friends. As of Saturday, close to 2,000 evacuees were staying at the Northlands Expo Centre. On Sunday, Rob Brekke, the emergency coordinator for the city, said that number dropped to 600 as people found other accommodations.

On Saturday, a convoy of evacuees once again made its way from the north side of the fire to the south — more than 14,000 people have made it out in the past two days, while many others were flown to safety.

The temperature hovered around 30 C on Saturday as the RCMP escorted about 2,400 vehicles to safety south of the fire-ravaged city.

Government officials confirm that the majority of evacuees made it through, but RCMP will continue to escort vehicles as needed.

On Saturday night, the massive wildfire nicknamed "the beast" forced yet another evacuation, this time at Fort McMurray Village, a work camp north of Fort McMurray housing first responders. 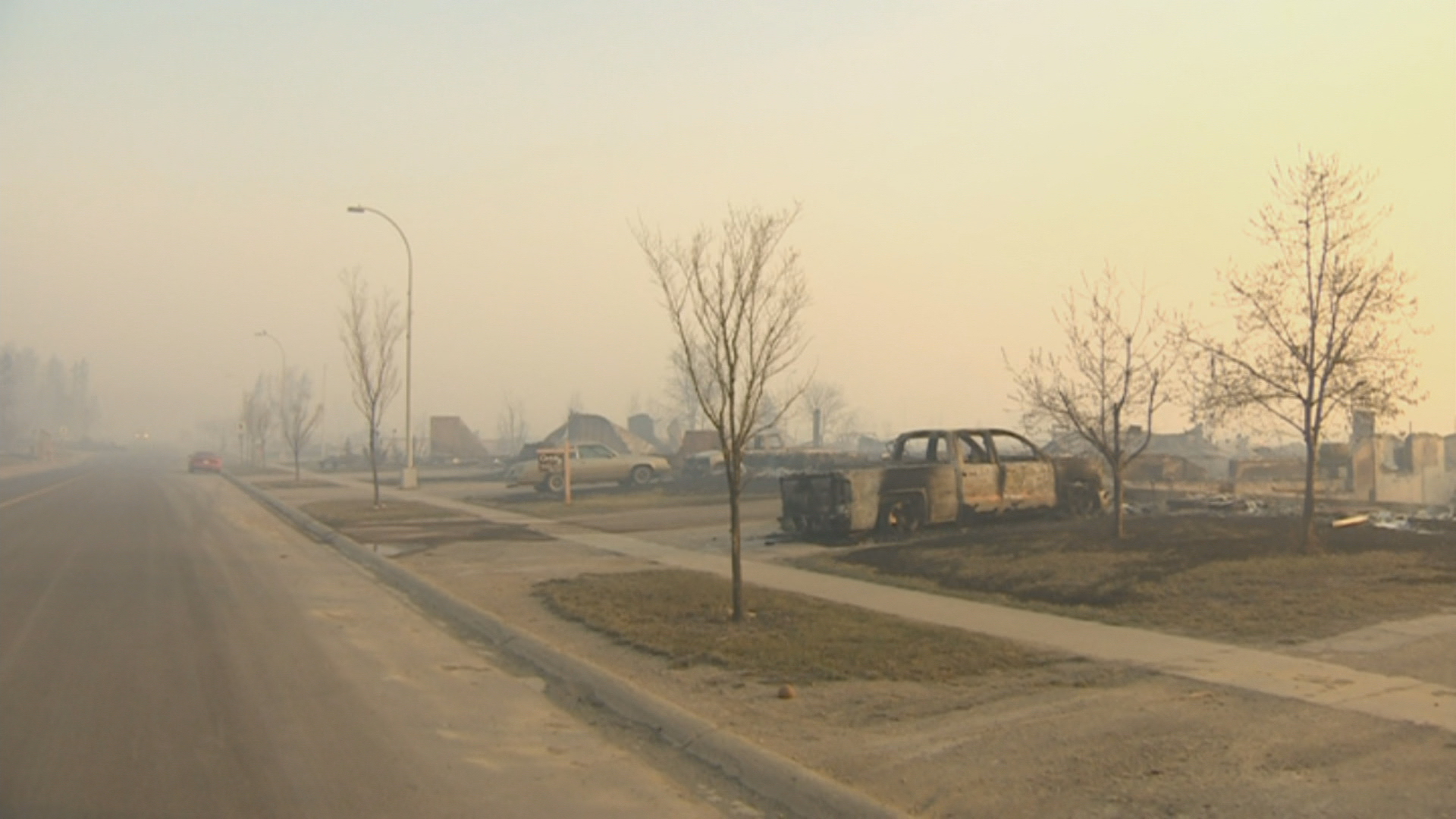 7 years ago
Duration 2:57
CBC's Briar Stewart in Fort McMurray watches as a convoy of evacuees moves through the city and the flames surrounding it

Both Suncor and Syncrude, with work sites north of the city, have evacuated their facilities as a precautionary measure.

The fire should pose no danger to Suncor's oilsands facilities, 30 kilometres from Fort McMurray, according to Chad Morrison, the province's senior wildfire official.

"Those sites are very resilient to forest fires, largely because the sites are cleared and free of vegetation," he said.

Inside the mostly quiet and all-but abandoned city of Fort McMurray, police have been going house to house, looking for people who may have been unable or unwilling to leave.

In a news conference Saturday, Premier Rachel Notley urged the last few holdouts still lurking in the city to leave at once.

"Please listen carefully to this," she said. "If you aren't a police officer, a firefighter or otherwise have a first-responder role in the emergency, you should not be in Fort McMurray."

The premier also said 32,000 households had registered with the Red Cross by Saturday afternoon. The Red Cross has collected more than $44 million in donations, so far, to help fire victims.

There is still no timeline for residents to be allowed back into their homes, but the Alberta government has begun preliminary planning, though it stresses fighting the fire is still the first priority.

Notley said the gas supply has been turned off in the city and the power grid has been damaged. Water in the city isn't drinkable and hazardous material will have to be cleaned up to make the community safe.

More than 500 firefighters are now battling the blaze on many fronts in and around Fort McMurray, along with 15 helicopters, 16 air tankers and 88 other pieces of equipment.

With files from CBC's Mack Lamoureux and The Canadian Press