While touring one of Fort McMurray's newest oilsands facilities Justin Trudeau defended his government's commitment to Alberta's oil and gas industry while balancing protecting the environment.

As Prime Minister Justin Trudeau toured a Fort McMurray oilsands mine and met with energy and Indigenous leaders, some residents of the northern Alberta city seemed less than impressed with the visit and what it all means.

"I was surprised he came to visit," said Edward Luski, getting off a bus at the downtown terminal after a day's work. "I don't think he's very loved for here."

The Friday visit, part of Trudeau's tour of Western Canada, saw him continuing to applaud his government's efforts to get controversial pipeline projects off the ground while keeping a mindful eye on environmental protection.

"We actually approved a pipeline that for the very first time is going to get our oil to new markets," Trudeau told reporters after his tour of Suncor's new Fort Hills oilsands site, one of the largest oilsands projects in the region.

"Moving our resources to market is not just a priority for Albertans, but, for Canadians, and we are going to do that in a responsible way." 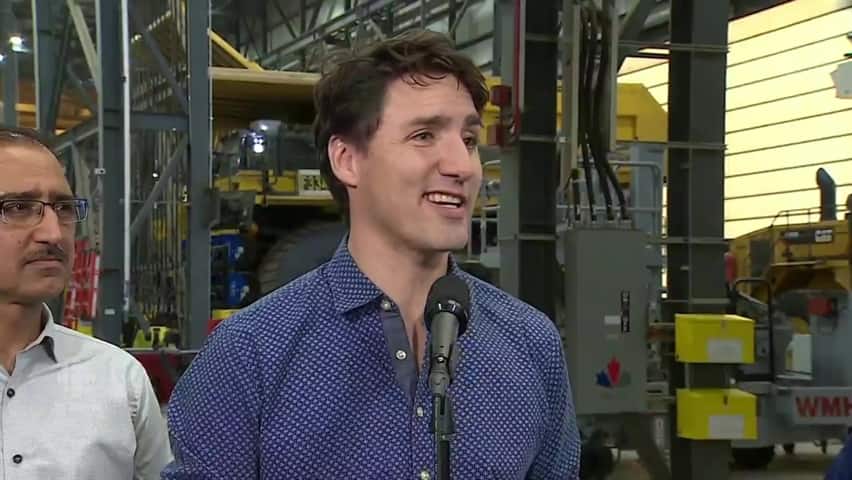 Trudeau says there will always be protesters in politics

With Suncor CEO Steve Williams as his tour guide, Trudeau met with workers and answered questions about the Liberal government's plans to impose a national carbon tax.

The prime minister played down concerns that government policies are slowing down investment in the oil and gas industry while capital is fleeing to the United States.

"You know what gives Canada a competitive disadvantage not being able to get our oil resources to new markets?" Trudeau said. "For 10 years Stephen Harper talked the oilsands up and weren't able to get [pipelines] done."

Following the tour, Williams without hesitation said he believed the Trans Mountain pipeline will get built.

Through the day, Trudeau met with other energy sector leaders, Wood Buffalo's mayor and the region's Métis and First Nations leaders.

Ron Quintal, president of the Fort McKay Métis, noted the significance of the three key parties - Treaty Indians, Metis and the federal government - being in the same discussion.

Quintal said all the parties recognize the importance of working together.

"In the circumstance of economics, there's a really big pie," Quintal said. "And we don't want to fight over that pie."

After the meeting with the prime minister, the Athabasca Chipewyan First Nation chief Allan Adam announced that the region's First Nations want to work together with pipeline builders.

"We want to be owners of a pipeline," said Adam, who has in the past been critical of the oilsands. "What we are looking for is potential partners to come and join with us and thus we can start lobbying the government in a proper way.

"We think that the pipeline is the most critical component to the oil and gas sector especially from this region."

'Most people are disappointed in him'

While Trudeau toured and met, Fort McMurray's residents were watching and listening.

Frances Jean, owner of a downtown car wash, was tuned in to the day's news coverage.

The well-known businesswoman, historian and a supporter of Alberta's right leaning political parties, said Fort McMurray has a historic distrust for Liberal politicians - and in particular prime ministers named Trudeau.

"I think most people are disappointed in him because he has not cared about Fort McMurray or cared about the place that has given most of the money to the rest of Canada for the past several years.

Robbie Picard, a pro-oilsands and pipeline activist, said it wasn't enough for Trudeau to come to town and talk about his achievements.

"He needs to own it like it's his project," Picard said.

Fort McMurray wants a prime minister, Picard said, who champions the oilsands for its environmental and technical achievements.

In British Columbia on Thursday, Trudeau met with Canadian Coast Guard members aboard the Sir Wilfrid Laurier to discuss marine safety and spill prevention, in Victoria. He was then met by 300 to 400 protesters in Vancouver while attending a Liberal party fundraiser.

Unlike that visit, he was only met by about a dozen pipeline protesters at the entrance of the downtown Fort McMurray hotel where he met with energy sector and Indigenous leaders.