In May 2016, more than 80,000 people fled the Fort McMurray area during Canada's largest wildfire evacuation. Now the municipality will find out how many came back.

Census marks several firsts, including an option for respondents to identify as transgender

In May 2016, more than 80,000 people fled the Fort McMurray area during Canada's largest wildfire evacuation.

Now the municipality wants to answer the question that has been asked ever since: How many came back?

"I've been at several dinner tables where the conversation has been [about] how many people have left town," said Kodjo Efu, the socio-economic supervisor for the Regional Municipality of Wood Buffalo. 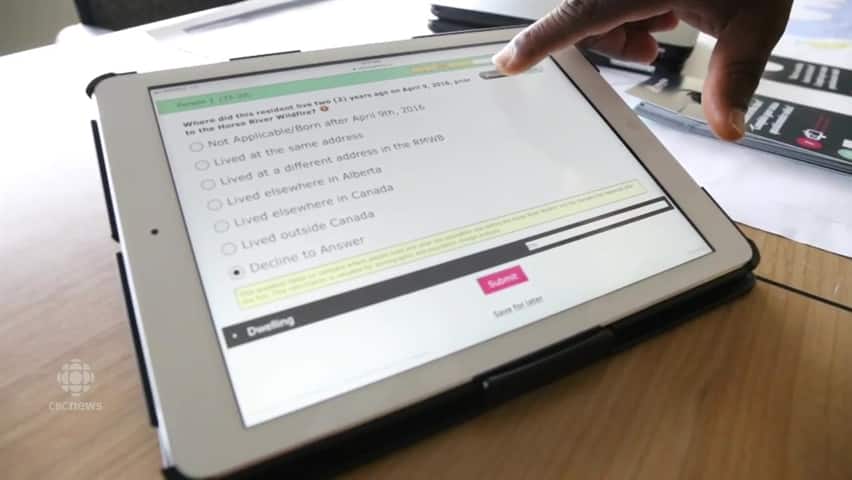 ' Residents need to help us and do the census'

2 years ago
0:41
In May 2016, more than 80,000 people fled the Fort McMurray area during Canada's largest wildfire evacuation. Now the municipality wants to answer the question that has been asked ever since: How many came back? 0:41

Between now and June 30, Efu and his team are trying to determine that number as they conduct the Fort McMurray region's first official population count since the wildfire.

The trickle of residents returning into the city began in early June 2016 and continued over the next few months. But anecdotal evidence has suggested some residents never returned.

Businesses in the hospitality sector complained it was difficult to find workers after many of their previous employees left, while school districts considered closing schools because there weren't enough students to fill classrooms.

This edition of the municipal census is also notable for several new initiatives.

It is the first census that allows people to select a transgender option when specifying their gender. Efu said the municipality hopes the additional data will help with diversity and inclusion planning.

It is the first time there will be census takers physically present in Fort Fitzgerald, the municipality's northernmost hamlet on the Alberta/Northwest Territories boundary on the Slave River. In 2015, nine people reportedly lived there.

How to complete the Wood Buffalo municipal census

'It is absolutely crucial'

Fort McMurray conducted its last census in 2015, with the numbers released just before the wildfire. It estimated that 125,032 people lived in the municipality, an increase of 7.4 per cent from the 2012 population of 116,407.

Like past censuses, this one will count Fort McMurray's shadow population — people who live in work camps or work in commercial and industrial sectors in the region for more than 30 days of the year.

The census is important to the municipality, Mayor Don Scott said, because population is the basis for grant funding from federal and provincial governments.

"It's the first census since the fire happened, and that's really important for us," Scott said. "It means more money we can put toward the municipality. So it is absolutely crucial."

Efu stressed that the census is confidential and said responses will not be shared with other municipal departments or third parties.

Even residents earning rental income from a so-called "illegal basement" will not risk that information being passed on to tax authorities, he said.

The deadline for filling out the census form is June 30. It can be done online, by phone with the municipal office in or near each community, or in person when the census taker comes to the door.