A year after a wildfire and a chaotic death-defying evacuation, the province says it's prepared to spend $5 million designing a second highway and escape route out of Fort McMurray, Alta. 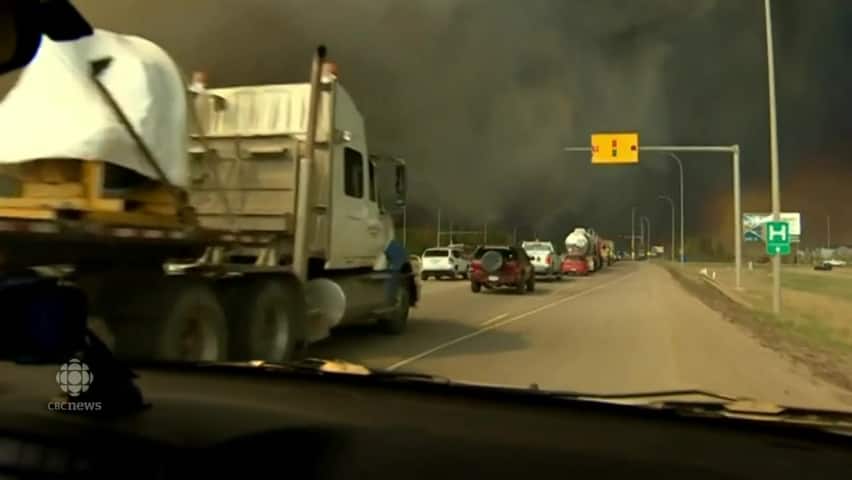 4 years ago
1:16
After a choatic wildfire evacuation a year ago, Premier Rachel Notley announced Wednesday the province is studying the feasibility of a second evacuation route out of Fort McMurray. The province will also allocate $5 million for an in depth study. The new details came in response to a question from CBC's Fort McMurray correspondent David Thurton. 1:16

A year after a wildfire and chaotic city-wide evacuation, the province says it's completing a feasibility study and is prepared to spend $5 million designing a second highway out of Fort McMurray, Alta.

"That's the first step," Premier Rachel Notley said Wednesday. "We have dedicated funds to that."

Last May, a ferocious wildfire forced approximately 88,000 people to flee the region with those heading south choking Highway 63 for hours.

Many evacuees became stuck in traffic with some running out of gas as walls of flames showered embers and ash onto the road.

Two teenagers escaping the fire died a head-on collision with a logging truck on May 4.

One victim's parents suspected the exhaustion of the evacuation might have played a role in their deaths.

In October, Wood Buffalo municipal council and its wildfire subcommittee supported a motion to request $10 million in pre-design funding for the East Clearwater Highway.

The municipality will chip in $5 million and estimates the total pre-design study will cost $15 million. It hoped the province, the federal government and industry would chip in the rest.

The ring road would connect northern communities such as Fort McKay, oilsands sites and Fort McMurray itself to Highway 881, offering a second escape route if Highway 63 was ever blocked, as it was during the May 2016 wildfire.

Alberta ​Transportation Minister Brian Mason said his department and the municipality will finish the feasibility study later this year.

The study, which began in December, will estimate the cost of the highway and outline "prohibitive costs" or "insurmountable obstacles," Mason said.

The minister said he did not expect any issues would arise at this early stage that would kill the project.

Wood Buffalo recovery committee member Marty Giles hailed the funding promise as an indication the $1.5-billion highway is one step closer to reality.

"This is the farthest we have ever been down the road on this," Giles said.

Jeanette Bancarz, chair of the recovery committee, said the chaos of the Fort McMurray wildfire evacuation has underscored the need for a second evacuation route.

"I fully expect the whole safety consideration is now at the forefront," Bancarz said. "I don't think it was as urgent prior."