Fort McMurray No. 468 First Nation is distancing itself from Jane Fonda's tour of the oilsands and from one of its members who endorses the Hollywood actress's message.

Fort McMurray No. 468 First Nation is distancing itself from Jane Fonda's tour of the oilsands and from one of its members who endorses the Hollywood actress's message.

Chief executive Brad Callihoo said the Cree and Dene band government could not build homes and other infrastructure in the community if it weren't for oilsands development.

"We can't do that with government funding," he said. "That's done because we do world class work for the industry up here."

Fonda, an actress and social activist, spent two days this week in Alberta, where she flew over the oilsands, lunched in Fort McMurray, and held two media events in Edmonton.

She condemned the environmental record of oil companies and blasted Canada's prime minister for betraying his commitments at the Paris climate talks.

The First Nation issued a press release Thursday saying it played no part in organizing Fonda's visit and that former band councillor Cleo Desjarlais Reece, who appeared with Fonda, did not represent the First Nation.

The release also said the band supports the "responsible development" of the oilsands and its partnerships with industry.

Wildrose Leader and Fort McMurray MLA Brian Jean applauded the statement and expressed puzzlement at why Canadians are convinced First Nations communities don't work with and benefit from the oil industry.

"I still think we have a lot of work left to do," he said. "We have very successful communities in Northern Alberta.

"I am very proud of the band that came forward."

She is not against the local oilsands companies, she said, but is against the expansion of mines or pipelines that would pollute the land and water and increase carbon dioxide emissions.

"I have seen evidence of the misuse of power that the oil companies have," Desjarlais Reece said. "And the amount of money they do give out to First Nations is pitifully small in relation to what they themselves make." 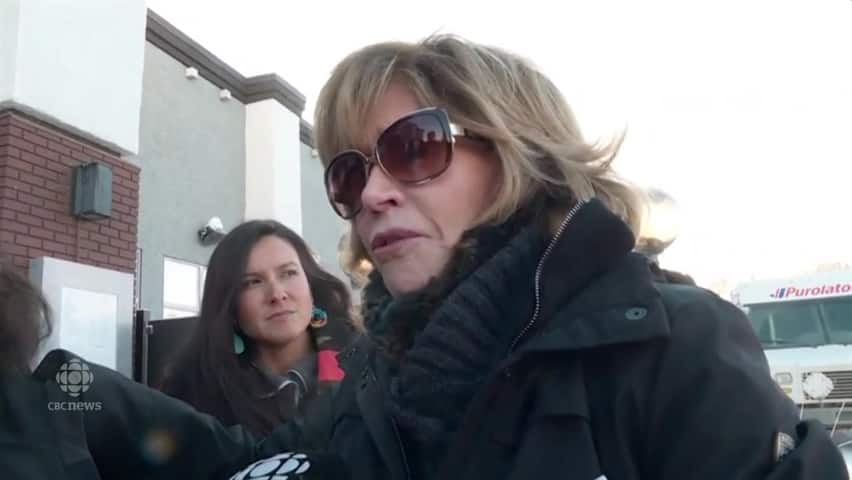 4 years ago
2:41
After taking an aerial tour of the Alberta oilsands, outspoken critic Jane Fonda said seeing the oil and gas operations in person made her body ache. She was then confronted by resident Susan Plamondon about the reason behind her visit. 2:41