It has been one week since the Fort McMurray wildfire known as "the beast" reared its ugly head. It continues to grow and has set its sights on Saskatchewan.

The wildfire, once measured in football fields, now sits at three times the size of Edmonton

It has been one week since the Fort McMurray wildfire known as "the beast" reared its ugly head. It continues to grow and has set its sights on Saskatchewan.

Wind gusts of 40 to 70 km/h were expected in the region Sunday, and there was light rain, as part of a cold front that's moving into northern Alberta.

The winds will help fuel the flames and what little moisture there is should not bring much relief to those battling the fire.

The wildfire outside of Fort McMurray, once measured in football fields, now sits at more than 2,000 square kilometres, three times the size of Edmonton.

"It certainly will increase in size today, and it's still listed as out of control and the conditions are still very dry. We do have some difficult weather, some interesting weather, coming up," said Matthew Anderson, wildfire information officer with Alberta Agriculture, speaking from Edmonton on Sunday.

"There's another cold front coming through and ahead of that front it's going to be very gusty, so this morning that could cause some significant growth as the winds shift and move through," he told CBC News.

"However, behind it, it's bringing cooler temperatures, at least by 10 degrees, perhaps dropping, and the humidity is increasing as well."

Anderson it's not uncommon for a fire of this size to burn for months. 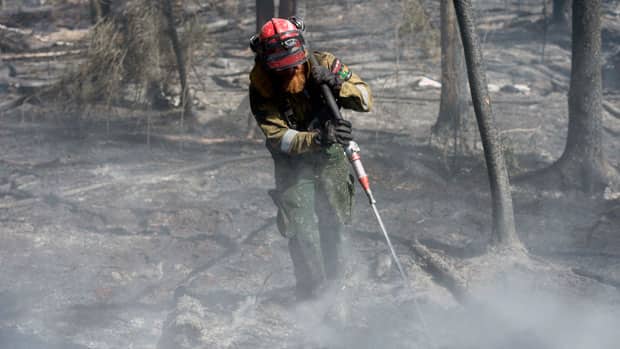 4 years ago
3:25
Unless there's a significant rain event of 100 mm or more, we expect to be fighting the fire for months to come, says firefighter 3:25

"There are a lot of hotspots and the entire area that is affected, the size is double the size of Calgary, will have to be checked by crews ... so it's going to be quite a long process and a lot of gruelling work," he said.

"We would need a significant amount of precipitation to really help to bring things under control a bit more," Anderson said, adding what little rain is expected may reach the fire zone or just fall farther north.

The province's meteorology branch predicts a chance of a small amount of snow on Tuesday or Wednesday because of the approaching cold air mass.

More than 500 firefighters working alongside 15 helicopters and 14 air tankers are battling the blaze.

Over the past seven days the fire has consumed more than 1,600 homes and buildings. It's forced 80,000 people from their homes and remains untamable.

The "beast" isn't the only inferno raging across Alberta's forests. In total 43 fires are burning —  seven out of control, one being held, and 35 under control.

Almost 10,000 people displaced by the fire have arrived in Edmonton over the past week. Many are staying with family or friends. As of Saturday, close to 2,000 evacuees were staying at the Northlands Expo Centre. On Sunday, Rob Brekke, the emergency coordinator for the city, said that number had dropped to 600 as people found other accommodations.

State of the neighbourhoods

Darby Allen, the fire chief of the Wood Buffalo Regional Municipality, said that he knows people are worried about their homes and are frustrated with the lack of information.

"We're really working hard on that. It's a complicated process," said Allen. "What's damaged, what's left, is it a garage only, is it a house?"

"So we really will get that to you as soon as we possibly can."

On Saturday, a convoy of evacuees once again made its way from the north side of the fire to the south; more than 14,000 have made it out in the past two days.

Government officials confirm that the majority of those needing to leave the area were out by Saturday, but RCMP will continue to escort vehicles as needed.

On Saturday evening, the blaze forced yet another evacuation, this time at Fort McMurray Village, a work camp north of Fort McMurray housing first responders.

"This is an orderly and precautionary evacuation," Noralta, the company that runs the camp, said in a press release, adding that people in the area are "not in imminent danger."

Earlier Saturday, authorities informed those staying at the camp they should be prepared to leave on two hours' notice.

Non-essential staff are being bussed to safe sites south of Fort McMurray. Some workers will be sent to Grey Wolf, another camp north of the city.

Both Suncor and Syncrude, which have work sites north of the city, have evacuated their facilities as a precautionary measure.