The quiet neighbourhood in Fort McMurray that Tamara Wolfe called home now looks like a war zone. Rows of houses that just yesterday lined Beacon Hill Drive are now in ruins, reduced to charred skeletons covered in a thick blanket of ash, with burned out trucks gutted in driveways.

Beacon Hill neighbourhood was all but lost in the wildfire 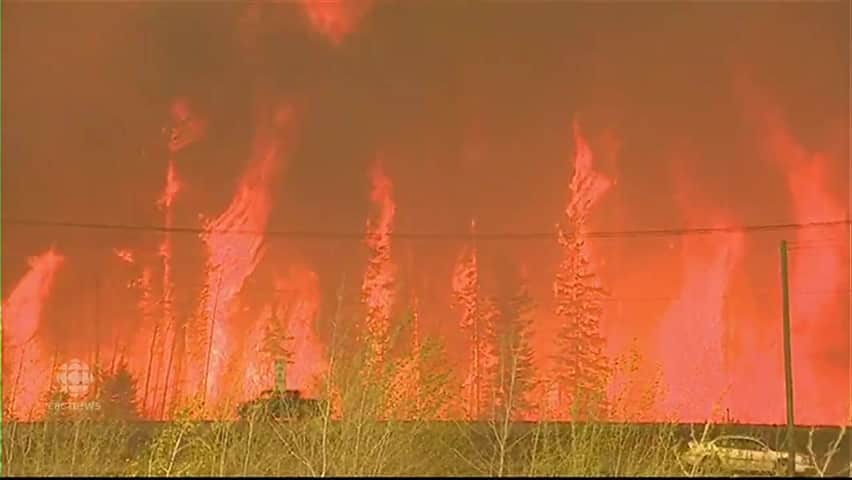 5 years agoVideo
1:21
Taken in the afternoon on Tuesday, the fire threatens the city of Fort McMurray. 1:21

Rows of houses that just Tuesday lined Beacon Hill Drive now lie in ruins, reduced to charred skeletons covered in a thick blanket of ash, with burned out trucks gutted in driveways.

The neighbourhood was one of the hardest hit by a wildfire that engulfed Fort McMurray Monday afternoon, forcing thousands of people from their homes, in the largest emergency evacuation ever seen in Alberta.

That wildfire has now burned more than 10,000 hectares and is expected to rage out of control through the day, officials said Wednesday morning.

Wolfe has no doubt her home of eight years is gone.

"I'm heartbroken. Just devastated," she said. "It's weird. I'm in a state of shock. At one point, I couldn't cry if I wanted to, and the next minute, I'm bawling my eyes out."

Like tens of thousands of others, Wolfe and her family fled the city as the sky blackened with smoke, and the fire came crackling through the trees towards their home.

They tried to escape south on Highway 63, but as the encroaching flames breached the highway, they had no choice but to turn around and head north.

It took them an excruciating eight hours to reach the safety of an evacuation camp,

She doesn't know whether she and her family will ever rebuild in their now decimated neighbourhood.

"I had 40 years of stuff in that house, and family memories, that's the hardest part," Wolfe said. "Things are replaceable but not everything is replaceable.

"It's not the brand new kitchen that we just renovated. It's not even the house. It's my grandparents' antiques and the china and the silver from their wedding that I'll never get back."

Wolfe is just one of an estimated 20,000 evacuees who is now heading south to Edmonton.

'He ... realized that there was no way he was going to make it out'

"It was looking pretty grim," Barn said. "The smoke was really thick, and you could hear the traffic."

As soon as the evacuation order was issued, Barn drove toward a gridlocked Highway 63. But he soon got a panicked call from his friend, Viraj Shah, who had run out of gas and was stranded amid the chaos.

"He was in his car, and realized that there was no way he was going to make it out," Barn said.

And he realized there was no one in the cars that were up at the pump. People had just left their cars behind.

"He left his car there, and walked in my direction, and I picked him up on the side of the road," he added. "It was pretty chaotic."

For now, Barn's home in Parsons Creek along the northwest edge of the city is safe.

But as scorching temperatures and high winds return to Fort McMurray, there is no guarantee it will be saved.

"I saw a lot of the carnage on the way out, and just knowing it's only going to get worse, it just makes your heart sink."

'I'm out of painkillers so I'm in a lot of pain'

Anne Berland-Reed was looking out the window of her downtown seniors home, Rotary House, when the sky turned red and plumes of smoke started clouding the horizon.

Within hours, Berland-Reed and her fellow residents were on a bus, fleeing the city, heading north on Highway 63.

"It was nothing but soot, smoke and flames," said Berland-Reed, 65. "There was fire coming from everywhere.

"The bus driver didn't know whether we were coming or going. I was trying to calm everyone down, but we had a hard time."

Amid the panic, she lost her wheelchair, and didn't have enough time to get a refill on prescription pain medication she relies on daily.

Berland-Reed is trying to face the fire with grace.

"But I'm out of painkillers so I'm in a lot of pain, I'm used to pain," she said. "I am not worried about that. I'm just worried about my grandchildren, my family."

Berland-Reed was offered a tiny room at the Noralta Lodge work camp, which is being used as an emergency evacuation centre.

But it was a sleepless night.

She hasn't been able to get in contact with any of her family members, and can't stop thinking about her son and great-grandson, who live in the now-decimated Beacon Hill neighbourhood.

"I just had a little great-grandson Dominick, and I'm really worried about my grandkid," said Berland-Reed. "He's a little baby, my first great grandson, and he was just born.

Berland-Reed and the rest of the senior home's tenants were being bused to Edmonton Wednesday afternoon.

"I don't know if anyone is ever prepared for something like this," said Karin Cramm, one of hundreds of evacuees staying at the Noralta lodge camp. "It's not something I thought I would ever go through in my life."

At first word of the evacuation Tuesday morning, Cramm packed a few changes of clothes into her trunk and rushed from her Thickwood home to pull her children out of school.

"We were in a hurry," Cramm said. "My son was upset. My daughter was upset. We had to go. I figured everything else is just stuff. We can pick it up along the way somewhere."

They waited it out at a friend's house for a few hours, before finally hitting the highway and heading north.

When they finally arrived at the camp, it was clogged with a deluge of more than 1,000 evacuees, and almost every room in the massive lodge was filled past capacity. They figured they would be spending the night in their car.

"But some guy who I don't even know came up to us and offered his place to us," said Cramm through tears. "He offered his room to us and said he would go and sleep in his truck for us.

Beyond the flames and the panic of the night, it's the kindness of strangers Kramm will remember.

"I'm just so thankful for people, that they've been so nice. I don't even feel scared. I feel sort of at peace with what's happening. I'm so thankful for how nice people are being.

"People are taking care of each other when they can around here."