For Fort McMurray exiles, 'the amount of love is crazy'

Centres for evacuees are filling up in Edmonton, but those who have lost their homes and livelihoods are refusing to give up.

'It's home now for most of us, especially me. My kids grew up there,' says one mother

Gifty Addo was at home in the Thickwood neighbourhood of Fort McMurray, Alta., on Tuesday afternoon when she first heard about the evacuation order.

Her sister and her mother, who both live nearby, called her. It's time to go, they said.

"But I thought no, it's not in my neighbourhood, I will stay," she recalls. "Then I went outside."

What she saw changed her mind — quickly. A wall of thick, black smoke, with deep orange-yellow flames dancing fiercely at its base. In a panic, she took her four kids to her mom's place, which was, at the time, in a safer part of the city.

She rushed back to her apartment to get some essentials. She didn't get far before she hit a traffic jam. A ten-minute drive became a two-hour nightmare. The smoke was swirling violently, "like a tornado," in the near distance.

Finally, Addo, her four kids, mother, sister and niece all packed into a vehicle and headed south as quickly as they could.

"It was so emotional and so scary because when you turn back, you see the fire. It looked and felt like you were in a movie. It was surreal," she recalls.

"The smoke was so bad that, by the time I left Fort McMurray, I was sick."

'The amount of love is crazy'

Addo and her four kids — aged 10, 8, 6 and 4 — made their way to Edmonton, where they've temporarily settled in dorms at the University of Alberta. They escaped so quickly, there was no time to pack.

They have the clothes on their backs and a few essentials. Everything else could be gone.

So like about 9,500 others forced to flee their homes, Addo registered at the Edmonton Northlands, a sprawling downtown convention centre that's currently housing more than 2,000 evacuees.

According to Northlands CEO Tim Reid, around 4,500 people are expected to call the colossal concrete citadel home over the next few days. There's no clear answer on when they might be able to return to Fort McMurray, but Alberta Premier Rachel Notley has hinted it could be weeks, best-case scenario.

Insurance companies have set up makeshift offices in the building and doctors, nurses and cooks are all on hand.

"The amount of love is crazy," says Addo of the small army of volunteers and aid workers who have descended on Edmonton to help families. "It's overwhelming."

But scattered among those trying to help are exhausted families still looking for a place to take refuge. Just metres from the tall glass doors into Northlands, Rodney Gosse, his wife and two kids are sprawled out on faux-leather couches pushed together to make beds.

"I've had maybe six hours sleep since this all started," Gosse says through bloodshot eyes, as his wife sleeps curled up under a pile of spring jackets and his teenage son scarfs down a plate of what might be chicken wth rice.

A high school teacher in Fort McMurray, Gosse and his family faced the unfortunate reality of dual evacuations.

They first went north to Syncrude's camp. The blaze — which officials have said could cover more than 2,000 square kilometres by Sunday — followed them there. They boarded a plane to escape south.

A cousin living in Red Deer, Alta., who Gosse hasn't seen in 30 years, reached out to him today and offered his home as a place to stay. Another woman, a complete stranger, offered a motorhome.

"I want to leave the best accommodations for the parents with young children. That's not easy." 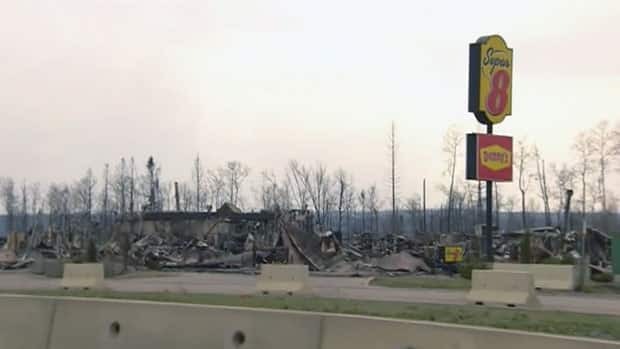 Now families like Addo's and Gosse's have nothing to do but wait. It is a kind of purgatory few can absorb gracefully. But both want to return to Fort McMurray when it's inhabitable again.

"I know we can build back Fort McMurray," says Addo. "It's home now for most of us, especially me. My kids grew up there, they are growing up there.