Dramatic new video shows the shocking size of a massive 'fire tornado' in St. Albert, Alta., last week that forced a firefighter to jump into a river to escape the flames. 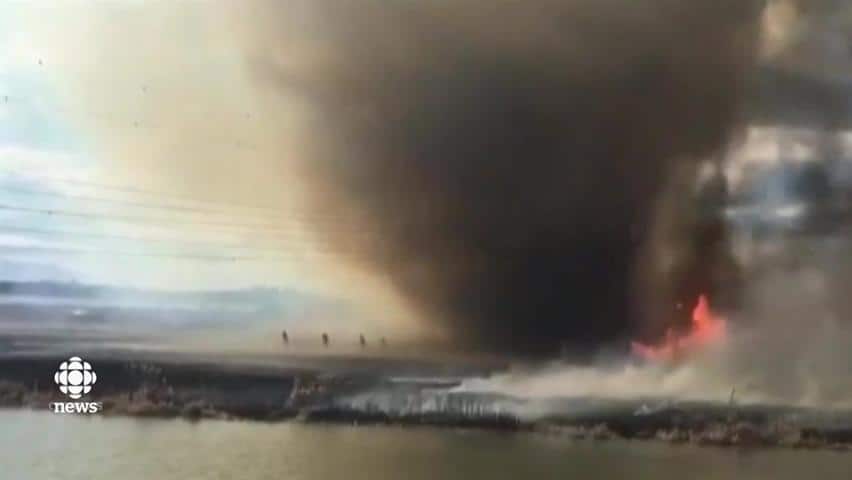 5 years agoVideo
0:44
Last week a giant 'fire tornado' formed in St. Albert. Diane Logan was able to capture this video while firefighters fled from the funneled black smoke and ash. 0:44

Dramatic new video shows the shocking size of a massive 'fire tornado' in St. Albert, Alta., last week that forced a firefighter to jump into a river to escape the flames.

Truly incredible video of fire tornado that happened during brush fire causing our firefighter to escape into river <a href="https://t.co/8BdeZDfeL5">pic.twitter.com/8BdeZDfeL5</a>

Posted by the St. Albert fire department on Twitter Saturday night, the video shows heavy black smoke from a brush fire billowing into a funnel towards the sky, as firefighters run from the flames behind it.

The fire was burning on April 14 near St. Albert's Big Lake, a section of the Sturgeon River northwest of Edmonton. It was sparked by a campfire that got out of hand.

Wind and dry grass made the fire so challenging to control that firefighter Vincent Pashko was forced to jump into the river to escape the heat.

"We're sitting, waiting for the conditions to change, and a windstorm started up from behind," Pashko told CBC. "The little bit of brush that was behind us lit on fire and ... created a windmill, almost like a tornado."

The winds stoked the hot ash behind him, and while flames weren't close to him, the heat alone was dangerous.

Pashko heard his co-workers scream for him to look out.

"I turned around and saw the big storm of ash coming towards me," Pashko said. "I could feel the heat coming up over my head, and I ran to Big Lake and dropped into the water to cool myself off."

He escaped safely, but Pashko said it was the most dangerous situation he has come across in his nine years as a firefighter.

"I was really lucky. It's just one of those things. I was in a safe zone but you just never know when the conditions are going to change."