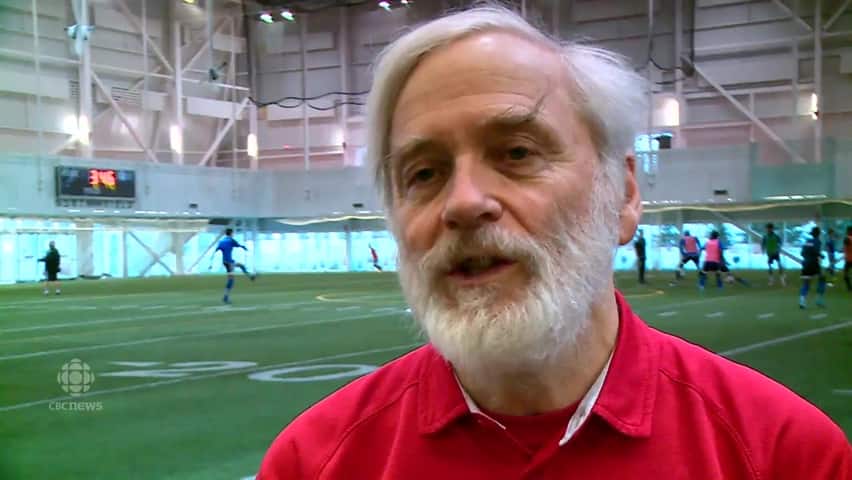 A decision by FC Edmonton to shut down its professional soccer operation is the direct result of lack of fans in the stands, team co-owner Tom Fath told CBC News in an interview.

And any hopes that the team might be reborn in a new Canadian league simply can't come true if the financial picture doesn't change.

"We would need 8,000 or 9,000 people to be sustainable, and that's not just bums in the seats. It's the eyeballs," Fath said. "If you've got the people watching, that also captures corporate sponsorship. We've got some great corporate sponsors, but we never captured the heart of corporate Edmonton to the extent we needed to."

The city's professional soccer team announced on its website Friday morning that it was leaving the North American Soccer League (NASL) and shutting down its professional franchise operations effective immediately.

Fath said staff were told early Friday morning, and the players were due to gather for a conference phone call in the  afternoon.

If you look back, we've only sold out a couple of games in our history.- Tom Fath

FC Edmonton was one of the founding teams of the NASL in November 2009, and the only original team still involved with it. In the statement posted Friday morning on the FC Edmonton website, owners Tom and Dave Fath said they believed in and supported the league's business model, but "our franchise has proven to be unsustainable in the Edmonton market."

"If you look back, we've only sold out a couple of games in our history," Tom Fath told CBC News. The team played at Clarke Stadium, which has a capacity of 5,000 spectators.

"We needed to fill the stadium regularly to create the demand to build a bigger stadium to carry ... the costs that we had in the NASL, and the travel, and everything else."

The team's lack of success on the field didn't help matters, but a bigger issue was the lack of "close rivals," Fath said. "Is it relevant if we are playing someone from the south of the United States?"

FC Edmonton played its first official league match in April 2011 and more than 200 league games since. Twice in its seven years, it made it through to the post-season.

The decision to pull the plug on the team was reinforced by the continuing uncertainly around the league's future, with an ongoing court battle involving the NASL and the U.S. Soccer Federation. The league had been seeking an injunction to regain its Division 2 designation.

Without Division 2 status, the league may not operate in the 2018 season, which would have left FC Edmonton without a league to play in.

The league's assistant commissioner, Rishi Sehgal, said the NASL is still planning for a 2018 season and remains confident ahead of an appeal hearing set for Dec. 15.

Sehgal was quick to thank the FC Edmonton ownership team for its longtime support of the league.

"We are very appreciative of FC Edmonton's contribution to the NASL as a founding member," Sehgal said in a statement. "The club's owner, Tom Fath, was a tremendous ambassador for the league and his genuine passion for the community did so much for the fans and the people of Edmonton."

The San Francisco Deltas also announced they were departing the league, Sehgal added.

The statement also made a point of reaching out to the local youth soccer community involved in its development program, stating "we remain committed to our FC Edmonton Academy."

On FC Edmonton's Facebook page, fans expressed hope that the team would be back to play with the Canadian Premier League, a new coast-to-coast professional soccer league that could begin play as early as 2018.

"Sad news," wrote Ian Pearson on the Facebook page. "Let's hope we join the CPL. With Edmonton joining, it can only improve it."

Fath said he is a big fan of the Canadian Premier League concept, noting that young elite players need to be "playing high-level games in order to transition to playing for our Canadian national team."

But, he said, that can't happen without fundamental changes in fan and corporate support for an Edmonton team.