'Like a video game': Edmonton stenographer speediest in North America

In a quiet tap, tap, tap of the keys, Jeffrey Weigl can transcribe a supersonic 280 words a minute.

'Not to toot my own horn, but this speed test stuff is very high level' 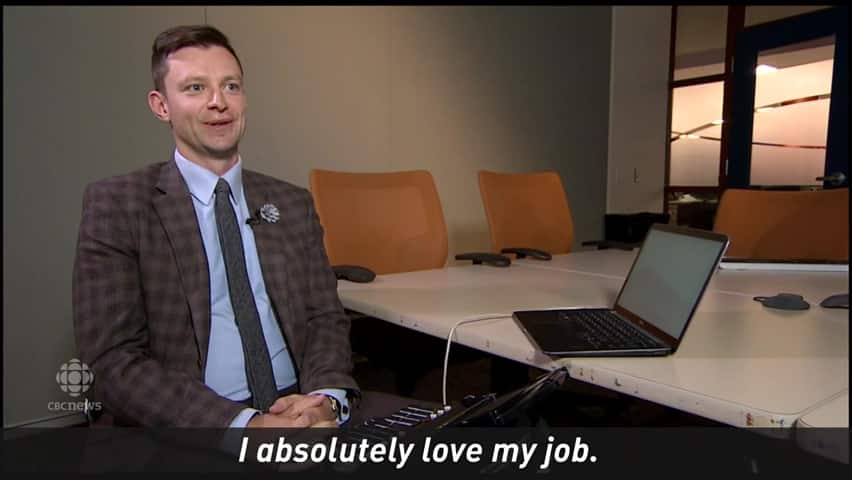 The fastest stenographer in North America

Blink and you'll miss it.

In a quiet tapping of the keys, Jeffrey Weigl can transcribe a supersonic 280 words a minute.

The Edmonton stenographer's lightning-fast fingers have landed him international accolades.

Weigl is the champion of the 2016 National Court Reporters Association Shorthand Speed Contest, the first Canadian to hold the title since the competition began in 1909.

"Not to toot my own horn, but this speed test stuff is very high level," said Weigl, who trained for three months before the competition held in Chicago in August.

"I've been doing it for 11 years and to get to the level I'm at … there are only a few people in North America that can compete in it, let alone win it."

The annual contest pits a small group of elite court reporters against one another in three increasingly challenging tests.

There may be little action outside the tapping of the keys, but there are certainly some sweat and tears shed in the competition.

In the first test, a speech is read out to the crowd of about 40 contestants at a quick 255 words a minute.

The second round of the contest is similar, but a smattering of legal jargon is included to make it harder for the contestants to keep up.

Finally, in a flurry of keys, writers must transcribe a staged court testimony, with two people reading at a tongue-twisting speed of 280 words a minute.

Weigl was not only the fastest, but also came away nearly typo-free, with a combined accuracy of 98.6 per cent.

"We need to be listening to someone talk for hours on end and get every single word and it's easier said than done."

The finger-twisting feat of stenography is no easy task.

The logistics of the shorthand keyboard can send even the most savvy typist into a tailspin.

Unlike the standard QWERTY keyboard, the shrunken stenotype has only 22 keys, and employs a series of short-keys.

This way words, phrases or even entire sentences can be churned out in a single hand motion across the keys.

"We're breaking words down syllabically and phonetically by how they sound, as opposed to how they're spelled," he said.

Unlike in the old days of stenography, that code is now converted into English not by hand but by a computer.

"That shorthand code that we write, that to you would look like absolute gibberish, our computers are able to translate our shorthand to English using a database that we personally develop."

When he's not basking in the glow of his new title, Weigl is sitting quietly in courtrooms or legal hearings at firms across the city. He also provides captioning services for the hearing impaired.

Weigl says the championship is a rare moment in the spotlight. Stenographers are meant to blend into the wallpaper.

"If we're doing our job properly no one really knows who we are or what we're doing," he said.

"In the courtroom, if we're keeping up and everything is going orderly were not a part of the proceedings. We're quiet off to the side, a fly on a wall, getting the evidence."

How does Weigl do it? Maybe it's in the genes.

Weigl's father was a stenographer for decades before becoming one of the founding instructors at NAIT's Captioning and Court Reporting program.

But Weigl admits he only had the foggiest of ideas about what the job actually entailed.

Weigl thought he would pursue science, but languished after his first year of university.

"I didn't really know what I wanted to do," said Weigl.

"That's when my dad kind of stepped in and said, 'Hey, maybe you should give this a shot, sit in some classes and see if you're at all interested.' "

Weigl had found his calling. His fingers were itching to get started.

He signed on to the NAIT program, finishing in one year instead of the standard two, and quickly became of the best stenographers in the city.

"It really worked out well for me. I'm absolutely loving it."