Shake and bake your way to a simple Greek supper

Chef Theo Psalios takes a cue from his Greek heritage and creates a quick and satisfying souvlaki-inspired meal.

And don't forget the tzatziki

For chef Theo Psalios, making Greek food at home isn't much different from cooking at his restaurant.

"Greek cuisine isn't quite as technical as some other cuisines. It's really about simplicity and the right balance of fresh, high quality ingredients," Psalios says.

The affable owner of Little Village grew up in the restaurant industry. His father, Yianni, was the patriarch of several Edmonton restaurants including Yiannis and Koutouki.

Like most restaurant kids, Theo ate a lot of meals at the staff table of the family restaurant. Sometimes that meant sharing a meal with the rest of the family, but other times less elegant solutions were required.

"Often meals were eaten standing up while wolfing down crazy concoctions of available ingredients in the kitchen area," says Psalios of a scene all-too-familiar to restaurant families.

Surprisingly though, the food memory that sparked his interest in cooking wasn't from the restaurant, but a fishing trip with his dad when he was 12.

Feeling hungry? Check out the other Fast Food recipes here!

"My dad and I went fishing one morning and left town at 3 a.m. The day before, he took a pork shoulder and sliced it into quarter-inch strips. He then marinated the slices of pork in red wine, olive oil, lemon juice, oregano and a heavy hand of salt.

"We arrived at our fishing spot which was near a park area/campground that provided those little hibachi barbecues.  It was about 4:30 a.m. and the sun was beginning to come up. My dad filled the bottom of the hibachi with briquettes and fired them up.

"As soon as the black of the briquettes turned to white/grey, my dad gently placed the wine-drenched pork on the hot grill. It was then that I experienced the sight, sound and smell of cooking for the first time in one giant knockout punch." 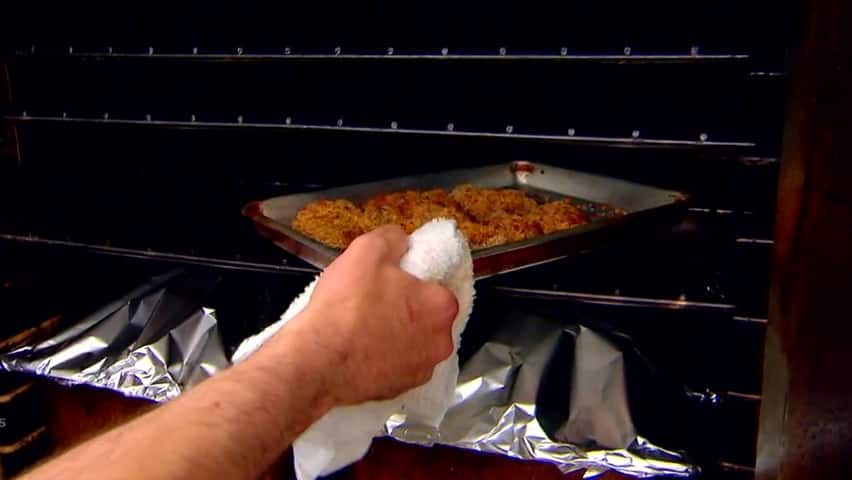 Though the family sold the full-service restaurants, Psalios has earned respect of his own with the Little Village take-out shop and, in the summer, his food truck of the same name. The idea was to provide well-rounded meals for families to pick up for those days where time is short — a need he is very familiar with himself.

That need inspired him to create his own Greek version of a classic he grew up loving — Shake 'n Bake chicken.

"It's really easy and quick when I don't have time to make a chicken schnitzel after picking up my three kids from hockey, and Shake 'n Bake is delicious."

Psalios suggests using boneless skinless chicken thighs instead of breast meat, as they have more flavour and will be juicier. Serve with a fresh-made tzatziki and you'll have dinner on the table in 30 minutes.

Toss ingredients in a plastic bag, then empty it onto a baking sheet.

Squeeze fresh lemon on the chicken before serving.

Serve with tzatziki on the side for dipping.

Fold ingredients together in a bowl. Stirring them can make the yogurt runny.