Looking for a sweet spot to snap that next Edmonton-inspired selfie? Check out the new Community League Plaza which opened last month in Hawrelak Park.

Laura Cunningham-Shpeley sits near the fireplace in the new Community League Plaza in Hawrelak Park.

"I love it. Oh I love it. It warms my heart just to see people bringing their coffee and choosing to come sit over here," said Cunningham-Shpeley, executive director of the Edmonton Federation of Community Leagues.

"I think this winter is going to be hard on Edmonton and we've built a place where people can still gather safely," she said.

The federation raised $4.5 million for the plaza which features a fireplace, overhead heaters, benches and picnic table seating and public art, all set in one of the city's most picturesque green spaces. 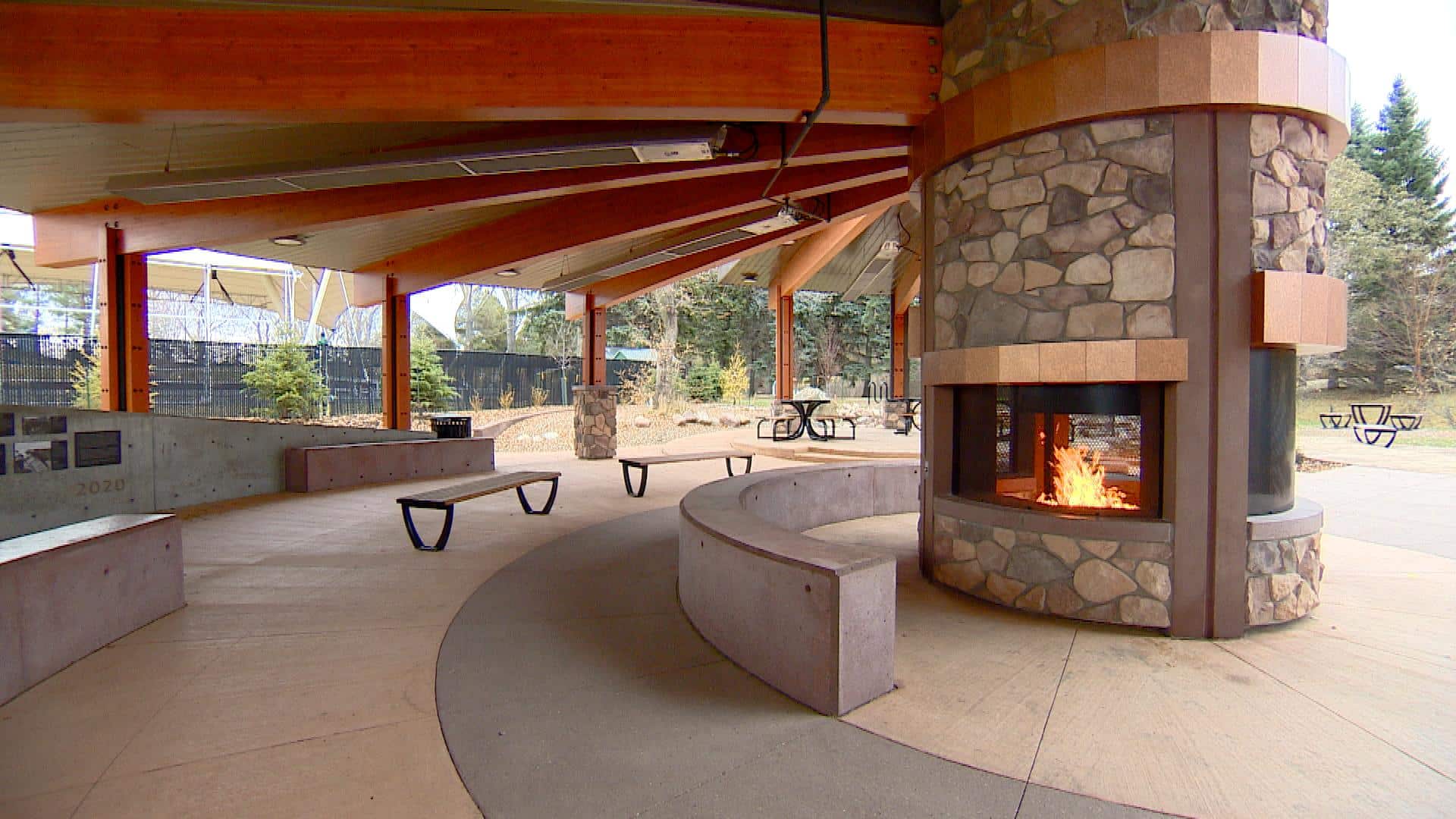 'It is a beautiful outdoor space'

You can see more from the Community League Plaza on this week's edition of Our Edmonton on Saturday at 10 a.m. Sunday at noon and 11 a.m. Monday on CBC TV and CBC GEM.

The plaza pays tribute to community volunteers and the community league system which marks its 100th anniversary in 2021.

When the first community league was formed, citizens were seeking the basics for their neighbourhood like sanitation and sidewalks, Cunningham-Shpeley said.

Community league members fought "for what they really felt they deserved and that just spread throughout the city, that feeling that together we are stronger, voices are louder," she said.

The plaza is a perfect example of that unity, Cunningham-Shpeley said. It's the result of a vision a decade in the making punctuated by an estimated 500 meetings with city parks staff, designers and architects.

"It takes a few core people, who are really committed to something to see it through to the end," she said.

The city now has more than 160 community leagues and the fight for skating rinks, playgrounds and community connections continues even during the pandemic.

Nora Begoray recalls first learning of the community league in her neighbourhood.

"I had an 18-month-old and a brand new baby and I needed a space for them to go in an Edmonton winter and there was a mom and tots group at my local community league that I was very thankful for," said Begoray, EFCL business development director.

Begoray points to the works of art, the tire swing, sports montage and soap box derby car as symbolic of many of the aspects of community league life, but the heart of the plaza is the stories and pictures of volunteers over the years.

Community leagues are made of "people who are just doing something to make their neighbourhood better," she said.

Begoray believes Edmonton's network of community leagues is worth celebrating. "We are the oldest, we are the largest and we are probably the most internationally well known."

The plaza is lasting testament to the community league legacy, Begoray said.

While the space is inviting, it is not available for private functions. The plaza is open to all, all the time, she said.

As for turning on the overhead heaters and fireplace, Begoray points to the buttons on the outer wall of the pavilion. In true community league fashion, "you can do it yourself."