An Edmonton man is dead after he went into anaphylactic shock on a worksite where sandblasting was taking place with a walnut-based product.

'There is a flaw for sure, and I'm really sorry my brother had to pay the price' 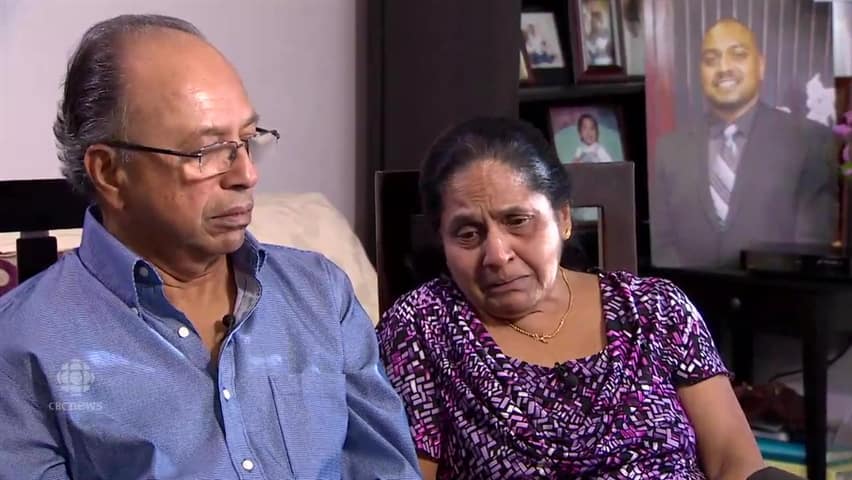 3 years ago
0:58
Justin Mathews' parents react to their son's death from an allergic reaction to a walnut shell-based sandblasting product 0:58

An Edmonton man died of anaphylactic shock after being exposed to a walnut-based product being used for sandblasting in the same building where he was testing air quality.

On Oct. 2, David and Mabel Mathews received a call that their son, Justin Mathews, 33, had been taken to the University of Alberta Hospital.

When they arrived he was unresponsive, on a breathing machine and in a coma.

"The doctors said 80 per cent of the brain is not active at all," Mabel Mathews said.

Then came the tough decision to take him off life-support, as doctors had suggested. He died after being taken off a breathing machine five days later.

Walnut dust prompted an anaphylactic reaction, causing Mathews's throat to swell up and leaving him short of breath.

Justin's parents say he was inside the Rossdale fire station, which is being renovated, for close to 20 minutes while testing the air quality with a co-worker. He was unaware a product containing walnut shells was being used to sandblast walls in the building. When he started having trouble breathing, Mathews rushed outside.

"He went to the car outside and he couldn't breathe. He was leaning on the car and trying to catch [his] breath," his mother said.

He then collapsed and fell to the ground. Edmonton fire crews responded first, followed by an ambulance.

Mathew's parents say he didn't have an epinephrine autoinjector, which is used to treat anaphylaxis, at the time, and he wouldn't expect to have a reaction unless he was eating. He was very cautious when ordering food, they said. He would carry an EpiPen when travelling outside of Canada.

How is it OK that my brother walked into a jobsite where they were blasting it all over?- Shari  Reklow

It's difficult for the Mathews to come to terms with the fact that their son, the youngest of four children, is gone.

"He was a very kind person. He loved children," his mother said.

"I want to make sure that there is no other mom or dad or sisters lose their brother again," she said.

Shari Reklow wants accountability for her brother's death. She believes the use of walnut-based products should be regulated in a similar way to food and warnings issued.

"There is a flaw for sure, and I'm really sorry my brother had to pay the price. We're all paying the price now," Reklow said.

"It's not just a food. It's being used in commercial and industrial applications and that needs to be regulated. Right now, as far as I can see within WHMIS, it's not a controlled or regulated substance."

"How is it OK that my brother walked into a jobsite where they were blasting it all over? It makes no sense.

She also questions why her brother wasn't treated with a epinephrine autoinjector when first responders arrived on scene shortly after he collapsed.

"First responders need to have Epipens with them because 10 minutes when you're in anaphylactic shock is too long. You can't wait that long. Your body will start shutting down and it will result in brain death," Reklow said.

"It certainly was a very unusual incident. I've certainly never experienced anything like this one. It's quite rare and uncommon," said Trent Bancarz.

"There isn't anything specifically in the health and safety code or any of the legislation that particularly mentions walnuts individually, but we do have laws in place in general that require employers to take all reasonable steps to keep workers safe at the job. And also workers are to be informed of any potential danger or potential hazards in the workplace so that they're forewarned and they can take the steps to avoid them."

Bancarz said walnut shell products are being used more often on worksites in Alberta as companies have been encouraged to reduce using silica-based products.

"Industry is looking at alternatives to sand or other silica based products because there are very well known hazards with using silica," Bancarz said. "During sandblasting operations, the silica can get very fine, and become what's called respirable, which means you can breathe it in and it gets onto your lungs and can cause things like silicosis, lung cancers and other respiratory ailments."

An Occupational Health and Safety investigation into Mathews's death is ongoing. It must be completed within two years of the incident.