No one knows what prompted the getaway, but Torty the tortoise's unchaperoned adventure is officially over — though it will still be a few days before it is reunited with its owners.

Torty's owners have been located, but it'll be a few days before they're reunited

Torty the tortoise may have been seeking adventure, making its getaway from an urban Edmonton backyard last week.

No one knows what prompted the getaway, but Torty the tortoise's unchaperoned adventure is officially over — though it will still be a few days before it is reunited with its owners.

"Obviously when you see a tortoise walking down the street you think, 'Not really somebody who should be out and about in Edmonton.' "

The person who brought Torty's tour of downtown to an end called the ACCC at about 4 p.m. Wednesday, after being surprised to see the giant beast ambling down the road and wondering what they should do.

Laughren said the person loaded Torty into their car and delivered the creature to the centre in west Edmonton.

It may not be home-sweet-home, but centre staff have tried to make Torty comfortable in a modified large dog enclosure — its shell is almost a half-metre wide — with a heat lamp in the one corner.

A pile of salad vegetables and a low tray of water with a ramp are also available in case the reptile wants to take a dip.

"The registered veterinary technologists have a lot of experience in different species," said Laughren.

Missing for a week

A Facebook post published by the centre seeking information about the tortoise's owners got a reply from a Tanya Nicole. She said the reptile had  been missing for a week and belongs to her landlord, who is currently out of town.

"We thought someone stole him," said Tanya Nicole in a Facebook reply. "In the summer he has free range of the front and back yard, someone must have left one of the gates open." 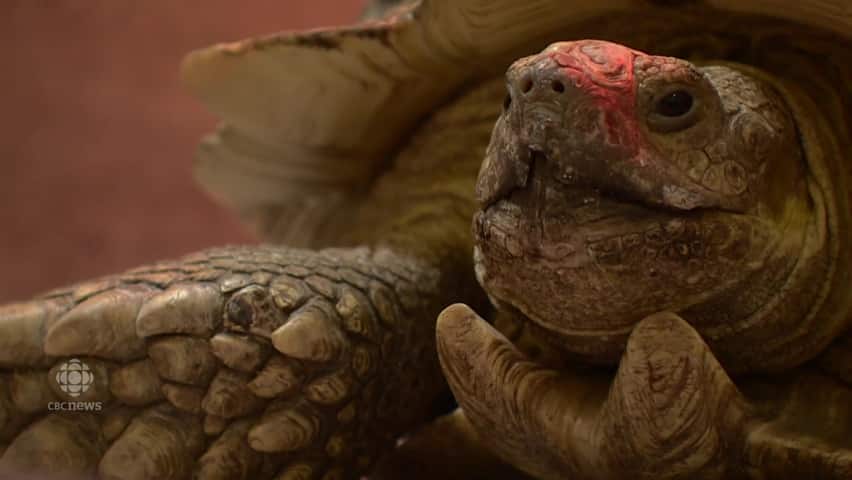 'Just going on a little stroll'

3 years ago
1:40
Tortoise discovered wandering the street near the Royal Alexandra Hospital on Wednesday. 1:40

While the alleged owner has called animal control, they're not releasing Torty — whose sex couldn't be confirmed by centre staff — just yet. Like any animal in the centre's care, its owner must present proof that the reptile is indeed theirs.

"There are some specific features on this tortoise that may not be on other tortoises … also pictures, a history of having them, vet records and things like that," said Laughren.

"Because the owner is away … we have to wait for the actual owner to come in or gives us permission to do so,"

Laughren said that, hard as it is to believe, this isn't the first tortoise that has come in to the animal control centre, which sees a wide variety of "pocket pets" including lizards, turtles and snakes.

Unlike dogs and cats, she added, tortoises don't have to be registered in Edmonton, and they typically don't have microchips.

Tanara McLean is a producer and journalist at CBC Edmonton. She grew up in Red Deer and has spent her entire career in Alberta, working in print, radio and television.