'Packed full of worms': Parasites wriggling in fish no cause for panic, experts say

Cassandra Coates is still squirming with disgust after pulling dozens of tiny white wriggling worms from a raw fillet of wild sockeye salmon.

'If they are dead, there is absolutely no problem at all'

Cassandra Coates is still squirming with disgust after pulling dozens of tiny white wriggling worms from a raw fillet of wild sockeye salmon.

"It was completely packed full of worms," Coates said. "If it wasn't for deboning the fish, I would have never noticed the worms crawling out.

"I was shocked. It was disgusting."

Coates, who purchased the fillet from Save-On-Foods in south Edmonton on Saturday, complained to store management and posted a video to social media showing her pulling dozens of the worms out with a fork.

"I wouldn't feel good about feeding it to my family," Coates said.

"If we are purchasing something like this from the grocery store, we should be made aware that this is potentially in our food." 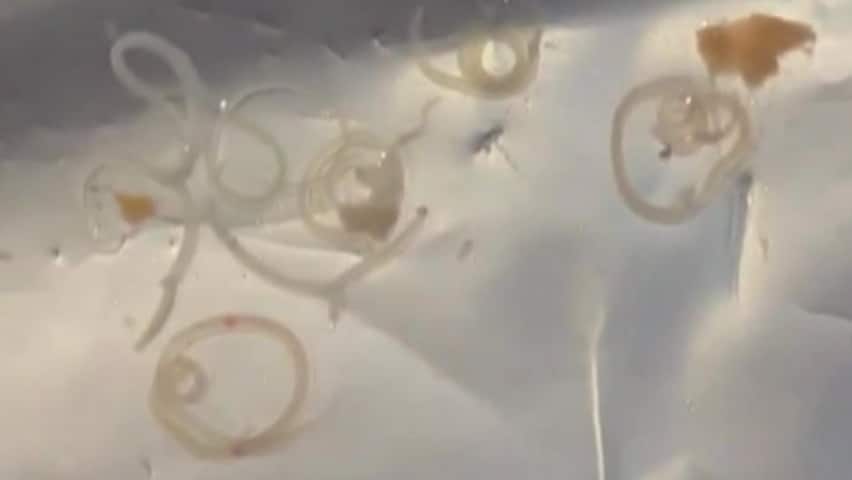 2 years agoVideo
0:34
An Edmonton woman was shocked to find her salmon contained live parasites. Experts say wormy fish are more common than you might think. 0:34

But experts say the worms are unwittingly eaten by plenty of seafood lovers and only pose a health risk if alive.

The parasites, anisakid nematodes, sometimes called herring worms or cod worms, are among the most common parasites found in fish and the majority of wild salmon are infected, said Michael Gänzle, Canada Research Chair in food microbiology and probiotics at the University of Alberta.

Data cited by the B.C. Centre for Disease Control suggests 75 per cent of wild Pacific salmon are infected with the parasite.

We will sometimes develop gastroenteritis which is always unpleasant but is not life threatening."​​​​​​- Michael Ganzle

Coates said she wanted to warn others about the risk of anisakiasis, an infection caused when parasites attach to the wall of the esophagus, stomach or intestine.

But if the fish is properly prepared for consumption, the parasites pose no health risk, Gänzle said.

Live worms can only be transferred to humans if the meat is raw, lightly cured, or undercooked.

"As soon as the salmon is cooked, it's still disgusting but never dangerous, but if the fish is eaten raw, there can be an infection," Gänzle said.

"We will sometimes develop gastroenteritis which is always unpleasant but is not life threatening."

Phillip Young, vice president of Canadian Fishing Company, one of the largest suppliers of wild sockeye in the province said the fillet Coates purchased likely came from his production line.

Save-On stores in Alberta buy the majority of their salmon from his Vancouver-based company.

Workers on the production line are tasked with ridding the fish of any parasites by pulling them out, Young said, but some still "get through."

"It is a wild product," he said. "We catch the fish, we process it and we get out to Save-On that same day.

"It is very fresh, it has not been frozen and unfortunately this is what you get sometimes."

With raw seafood dishes — from poke to sushi to ceviche — growing in vogue, careless diners are at an increased risk of swallowing a parasite.

If fish is to be consumed uncooked, killing the parasites requires it to be frozen at -20 C for at least a week, Young said. Most commercial sushi-grade seafood suppliers freeze at -40 C.

"Because sushi has become so mainstream now, a lot of people think they can go get a piece of salmon and use it for sushi and that is not the case."