Stephen Mandel will not run for a fourth consecutive term as Edmonton mayor.

Mayor will not stand for re-election, says time for new leadership 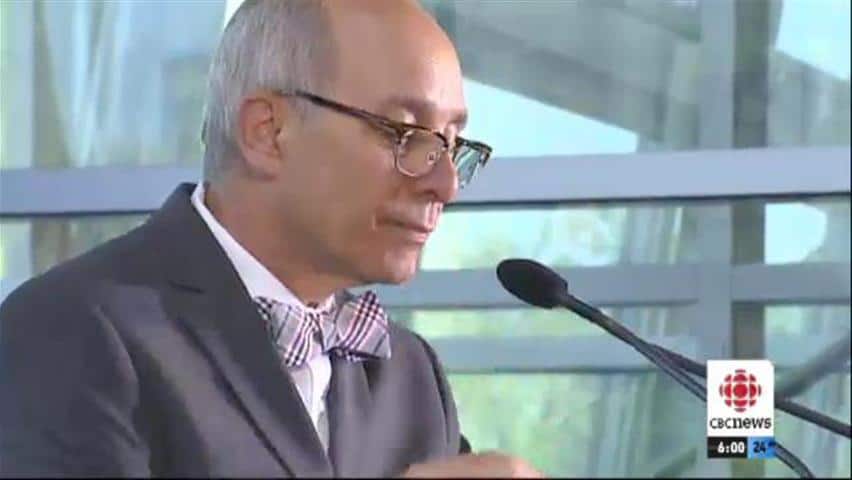 Mandel announces end of an era

Stephen Mandel will not run for a fourth consecutive term as Edmonton mayor.

"I believe it's time to open the door to new leadership to guide our city's path forward," he told a news conference this morning at the Art Gallery of Alberta downtown.

"There's always more to do," he said. "Edmonton's a big growing city and city hall must continue to work hard to keep pace with the growth, energy and ambition of this incredible city."

Later he told reporters he was tired. "I need a rest," he said. "I'm not sure I had the passion for four more years."

Mandel, 67, said he was proud to work with dedicated and "amazing" city councillors over the last nine years.

"After years of not investing in our city, this council had the vision, desire to do the kind of things right for the citizens of Edmonton."

He applauded its support of  the arts, community and the downtown arena.

"We want our city not merely to exist, but thrive," he said.

Mandel teared up when he thanked Edmontonians for their support in transforming Edmonton into "more of a capital city again" with "a stronger urban foundation," with "no more crap."

But he struggled most with his emotions when thanked former Premier Ed Stelmach, who was in attendance.

"You have been a great mentor and a great friend ... and a wonderful friend of this city," he said to applause.

Other political leaders were quick to react to Mandel's decision.

"On a personal note, I admire Mayor Mandel for his steadfast defence of Edmonton’s interests. Edmontonians have been fortunate to have had such a strong advocate in the Mayor’s chair," she said.

Calgary Mayor Naheed Nenshi tweeted, "Much love to Mayor Mandel this morning...Thanks for being my teacher and a great leader."

Delayed decision to drop out

Mandel was expected to announce his plans last month during a state-of-the-city address, but instead lashed out at what he called a penny-pinching and short-sighted provincial government.

He told the 2,000 business people in attendance he had second thoughts about retiring when the province cut funding for universities and neighbouring communities balked at the city's annexation plans.

While many expected the mayor to bow out after steering the downtown arena issue through a jittery city council, some councillors were still holding out hope he will run one more time.

"I think we have a very strong foundation laid for some transformative projects — the downtown development, LRT and the city airport development," said Coun. Amarjeet Sohi, one of a handful of councillors expected to run for the mayor's chair if Mandel steps down.

"It'd be nice to see him continue until we put shovels in the ground."

Coun. Kerry Diotte is already campaigning for the job, while councillors Karen Leibovici and Don Iveson say they are considering joining the race as well.

Voters will be blessed with several choices in the October election, Mandel predicted.

"The job of mayor is without question tjhe best job in this city and I can tell you it has been a tremendous honour for me to hold that for the last nine years," he said.

"But I've also always believed that a politician needs to know when to make room for fresh ideas, new energy and renewed leadership."