Alberta’s justice minister condemned an Edmonton demonstration with connections to known far-right groups on Tuesday, calling them “a small group of sad losers.”

1 month ago
1:25
Edmonton police say there were called to a “demonstration involving opposing groups” in the area of 118th Avenue and 82nd Street Tuesday night. 1:25

Alberta's justice minister condemned an Edmonton demonstration with connections to known far-right groups on Tuesday, calling them "a small group of sad losers."

Anti-racist protesters clashed with a group gathered in a north Edmonton parking lot around 8 p.m. Police say about 100 people from opposing groups gathered at 82nd Street and 118th Avenue.

A 39-year-old man was arrested and released, police say, after pushing and shoving broke out in the crowd.

It comes weeks after the alleged assault of an anti-racism demonstrator in Red Deer, and as RCMP investigate a hit-and-run at a Black and Indigenous Lives Matter protest in Ponoka.

Victoria Stevens, an anti-racist counter protester, said she came out to the Safeway parking lot after seeing social media posts circulating calling for "Canadian Patriots" to come to the intersection to disrupt a so-called Antifa meeting, she said in an interview with CBC News.

Antifa, short for anti-fascists, is an umbrella term for far-left-leaning militant groups that resist neo-Nazis and white supremacists at demonstrations.

"Allowing this stuff needs to stop and the police need to do more," she said. "There was hate speech being thrown around. They were inciting violence."

Edmonton police spokesperson Cheryl Voordenhout said the hate crimes unit was consulted in the investigation, but as of Wednesday, the threshold for criminal charges had not been met.

"While all Canadians have a right to free expression, I absolutely condemn any demonstration of bigotry or racism," he said.

Video of Tuesday's incident shows a demonstrator wearing a hat brandished with C3, the shorthand for Canadian Combat Coalition.

Last night, a small group of sad losers organized what has been described by some as a “white supremacist rally” in a grocery store parking lot in North <a href="https://twitter.com/hashtag/YEG?src=hash&amp;ref_src=twsrc%5Etfw">#YEG</a>.<br><br>And while all Canadians have a right to free expression, I absolutely condemn any demonstration of bigotry and racism.

C3 has held rallies in recent years with groups that attract white supremacists and neo-Nazis including Soldiers of Odin, the Three Percenters and Storm Alliance, according to the Anti-Hate Network, a non-profit tracking hate groups in Canada.

Footage of Tuesday's incident was also posted to a Canadian Infidel YouTube account shortly after the confrontation took place on Tuesday night. Canadian Infidels is a rebranding of the Soldiers of Odin, a white supremacist group founded in Finland five years ago.

A protester can be heard in a video reviewed by CBC News describing himself as a "Canadian patriot."

As of Wednesday, CBC News could not independently verify who organized the rally or their connections to known white supremacists groups.

The demonstration comes as experts note a concerning rise during the pandemic in the activity of self-described patriot movements, known to proffer deep-state and COVID-19 conspiracy theories.

While patriot groups do not typically adhere to the same strict white nationalist ideologies as some far-right groups, they often traffic in similar anti-immigration and Islamaphobic sentiments, says John McCoy, executive director of the Edmonton-based Organization for the Prevention of Violence.

"I think that in many ways helps to explain why we're seeing greater numbers of these individuals show up at protests. Whereas previously we were seeing a handful of individuals come out, now we're seeing dozens and I think that's not something that's unique to Alberta," said McCoy.

'Racists are NOT patriots & hate speech is NOT acceptable in #YEG," he wrote in a post on Tuesday morning.

'White folks aggressively spitting 'all lives matter' inelegantly proves the point that Black, Indigenous & People of Colour's lives have not yet been universally afforded equal value in our society. STOP IT," Iveson said.

Obviously we condemn racism and racial prejudice in any manifestation. I don't think we should give them the attention that they crave.- Premier Jason Kenney

Premier Jason Kenney was asked at a news conference Tuesday whether he would unequivocally condemn the presence of far-right and white supremacist groups in the province.

"Obviously we condemn racism and racial prejudice in any manifestation," he responded. "I don't think we should give them the attention that they crave." 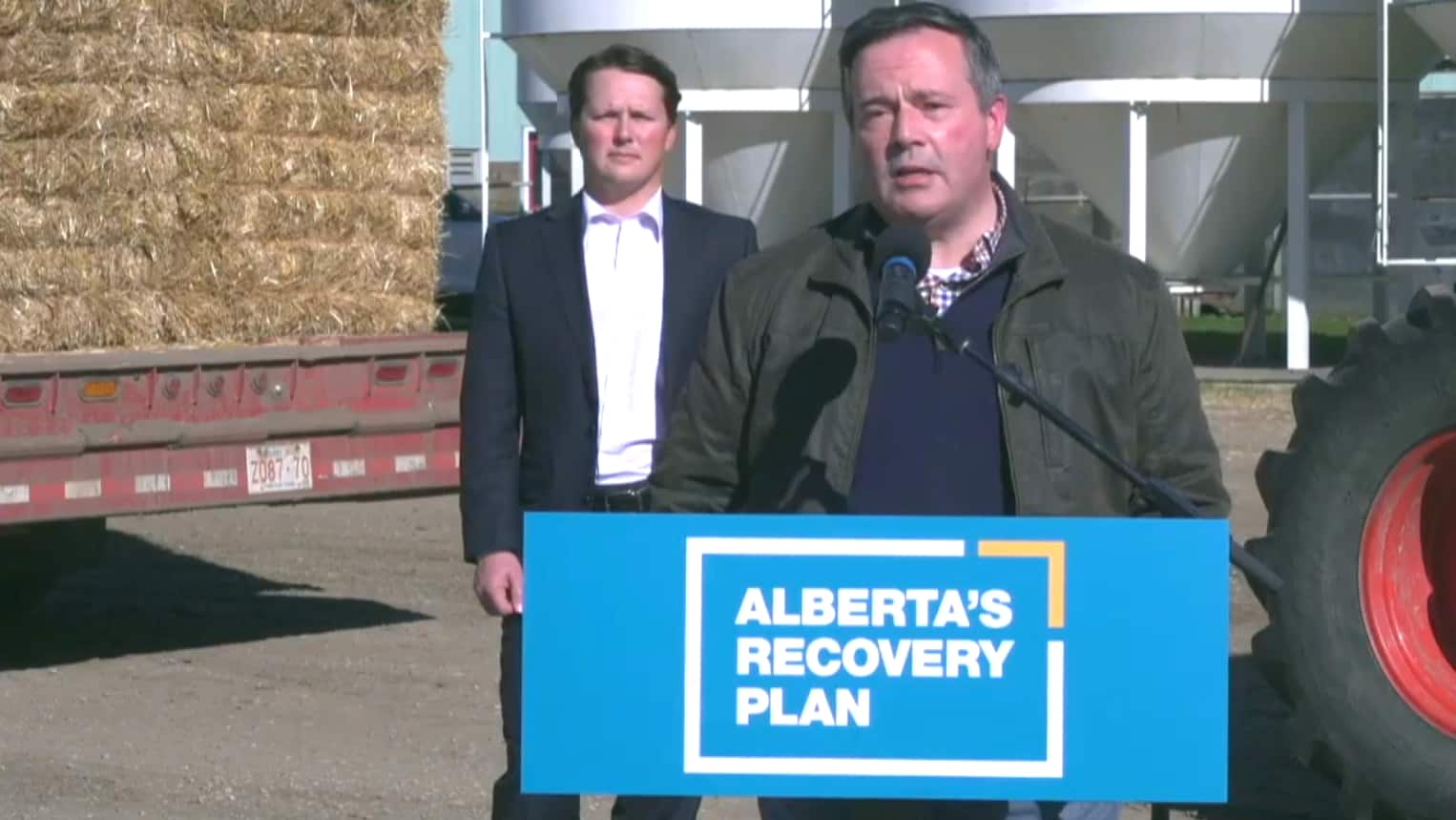 29 days ago
0:50
Alberta's premier says racists and white supremacists are un-Canadian and un-Albertan, and he denounces those who go around trying to get attention for a message of hate. 0:50

Evan Balgord, executive director of the Anti-Hate Network, said it was "the bare minimum" to condemn racism in the abstract, especially in the context of recent clashes in Ponoka, Red Deer and now Edmonton.

"If these groups aren't strongly condemned and if law enforcement just stand by while they beat up groups of anti-racists, they're going to keep coming back and acting more and more violent until they're addressed," he said.

With files from Raffy Boudjikanian and Audrey Neveu