Oilers' season is like 'death by a thousand cuts,' GM says

Despite the dismal performance that has left the team near the bottom of the league standings, the Edmonton Oilers won’t be making any major moves in an effort to improve.

Peter Chiarelli says plan is to stay the course, not take any drastic action

Oilers general manager Peter Chiarelli isn't hitting the panic button just yet, although if things keep going the way they are, he may have no choice.

"Obviously I am disappointed as to where we are," Chiarelli said Tuesday. "It's a little bit of 'death by a thousand cuts' ... you are patching up one area and another opens up."

Chiarelli made no bones about it, saying all facets of the team's game needs to improve.

He acknowledged the team's many downfalls — a lack of scoring, defence, the power play, and goaltending.

"A lot of things aren't going right at this point," Chiarelli said. "And we're trying to work our way through it. But there's a balance. You have to let these things play out to a certain degree, and you have to act when you believe they're not getting fixed."

Chiarelli told reporters that he is keeping an eye on other opportunities and other players. "We'd like to see some traction but if we don't, we'll have to take a different tact. I don't know when that is."

Some of that traction needs to come in the form of consistency, their most recent road trip is a glaring example of how that's been missing.

The team suffered its worst loss of the year a week ago with an 8-3 loss to the St. Louis Blues, which was followed by an impressive 6-2 win in Detroit the next night.

But the team failed to build on it two nights later dropping a disappointing 3-1 loss to the lowly Buffalo Sabres.

The team is now hoping for back-to-back wins Tuesday for only the second time this season as they meet the visiting Arizona Coyotes, who have the worst record in the league.

"Trust me, we've been looking at these swings, and they're hard to really pin down," Chiarelli said. "I've had a lot of discussions with the coaching staff and everyone on it.

"I wish I had a more concrete answer for you, but I think part of it's mental when you have such a swing in performance from game to game."

Young players key to the future

Chiarelli was clear that the team intends to keep investing time in young players who are expected to be key to the team's future.

"Part of the broader picture here is that we have to get these players into our lineup at some point. These are players that will grow with the organization and contribute to our success," he said.

"These are good players that are going to become better players and you have to let them grow."

Oilers players are also mystified by their lack of success. 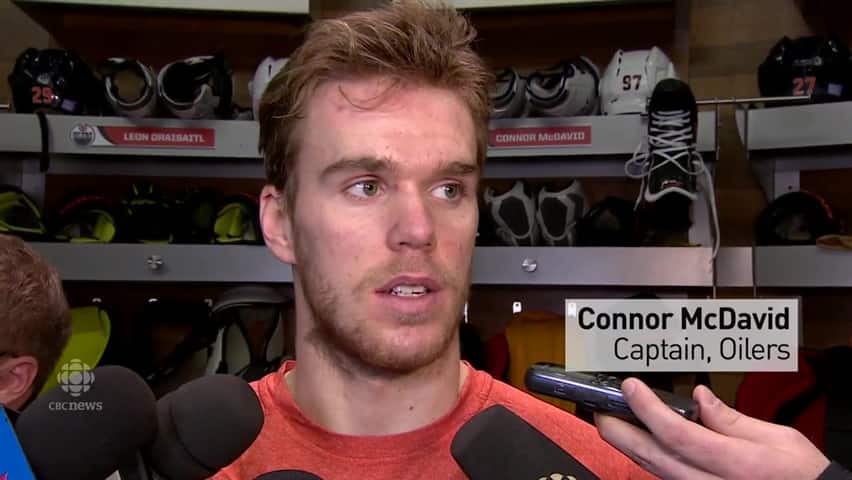 "I don't think anyone thought it was going to be easy," said captain Connor McDavid.

"I think people forget the expectations. We didn't put those on ourselves that was kind of media and fans. We expected our team to get good as well, and we haven't been. We'll find a way to dig ourselves out of it."

The solution needs to come quickly with more than a quarter of the season already gone.

"We can't wait another week or another couple of games, " said Leon Draisaitl. "It has to start tonight."

The Oilers are currently in 27th place in the National Hockey League, tied with the Florida Panthers.

The team's record this year is 9-13-2 — a far cry from last year's playoff team, which ended with the Oilers eliminated in Game 7 of the second round.