In another step towards reconciliation, the City of Edmonton has hired a Cree Métis artist as its first ever Indigenous artist in residence. Mixed media artist Dawn Marie Marchand is hoping to tell stories of the area's rich Indigenous history through her work during the one year pilot project.

‘It started with a soccer ball’ - artist Dawn Marie Marchand

It wasn't until she got to university and began to use collages and colours as a guide to studying that Dawn Marie Marchand realized she had artistic talent.

The collages were her unique way of getting over a learning disability.

But what began as a learning and healing tool led to a passion of telling stories through art as Marchand blossomed into a well-known visual artist.

Now she's going to be telling those stories in her new job as the first artist in residence for the City of Edmonton's Indigenous Relations Office.

"I'm overwhelmed. I feel highly honoured, I'm really surprised but at the same time I'm really excited," said Marchand, who was born in St. Paul, Alta, and is a member of Cold Lake First Nations.

Marchand, 45, describes herself as a Cree Métis person and a mixed media artist.

She wants to share the rich oral and ceremonial history of Indigenous people who have been living in this area for thousands of years.

"There's so much history that needs to be shared with a broader public," she said 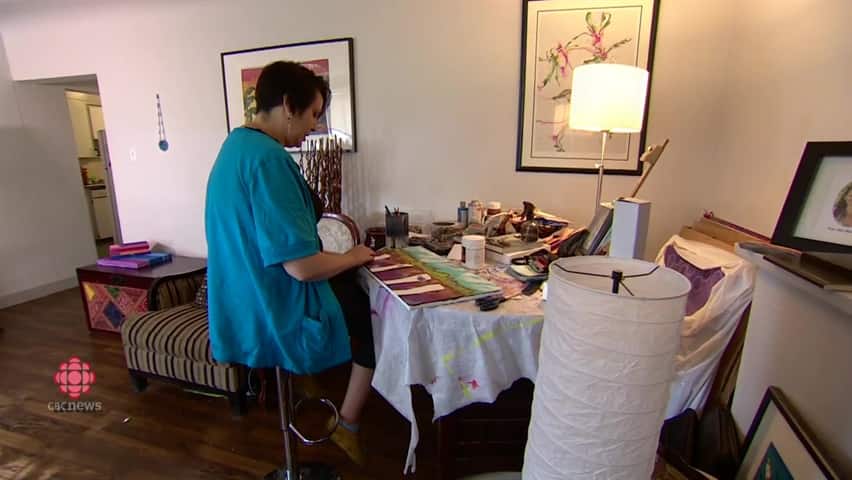 4 years ago
1:44
Watch as Dawn Marie Marchand gets creative in her apartment studio. 1:44

'How it all came about was I designed a ball!'

She also has a goal of exploring current issues, admitting some of them, such as the legacy of residential schools, might be uncomfortable for many.

But before she puts a brush to paper, Marchand plans to talk to people from Indigenous communities about the stories they want told.

"The first part of my work will be researching and actually going back into the community, working with the Indigenous Relations Office to start uncovering some of the stories from the people around this area," she said, adding she'll be including many people in her projects.

Marchand has been making a name for herself for a number of years — as an educator, as an Aboriginal liaison in schools, and as an activist on Indigenous issues.

Art started as a learning tool for her but has become her life. The front room of her Edmonton apartment has been converted into a studio where she brings her work to life.

That room is where she came up with the unique artwork for a soccer ball honouring Treaty 6 territory and celebrating the Indigenous communities around the city.

The art for the ball was commissioned by Free Footie, a free soccer league for kids who wouldn't otherwise be able to play due to cost or other barriers.

The idea of the ball scored big with the City of Edmonton, which contacted Marchand about the artist in residence position soon after it was revealed.

She still can't quite believe the impact the ball had.

"How it all came about was I designed a ball," she admits. "Free Footie wanted to work on reconciliation by having their youth, the young people they're working with, understand more about the oral history and the Indigenous history of this land of Edmonton, so it started with a soccer ball."

The city sees Marchand's appointment as another key step toward reconciliation.

A step toward 'inclusion of all peoples'

Initially the position will be part of the Indigenous Relations office in a one-year pilot project.

"The mayor and council are trying to achieve the inclusion of all peoples, and with the Truth and Reconciliation Commission having one of its stops here, it speaks to a renewed relationship," said Mike Chow, director of Indigenous Relations and Citizen Services for the city.

Chow said Marchand's life experience and willingness to tackle a range of topics — from poverty to equality — will capture some of the complex issues Indigenous people deal with every day.

"Art has a way of creating spaces that invoke conversation," said Chow. "If there are ways we can help to bring those voices and stories to the forefront, I think that's fantastic."

It still has to be worked out where people will be able to see Marchand's work but wherever it goes in Edmonton, Christine Frederick is confident the art will make the city a richer place.

"I feel very, very strongly that she is a good voice to be able to articulate the Indigenous experience here," said Frederick, who is artistic director of Alberta Aboriginal Arts and executive director of the Dreamspeakers film festival society.

"I think she has the capacity to build a new legacy for Edmontonians."

Marchand said a key part of her approach will be honouring traditional protocols and working in a collaborative way with the community and other artists.

She expects her research to take a few months before she begins to create some large-scale and smaller pieces.

Her work will include photography and paintings with a final exhibition to complete her residency.

Seeing herself as a grassroots artist, Marchand gives the city a lot of credit for hiring her and giving her the creative licence to go ahead and carve her own path.

"I think it shows they're willing to listen to different voices on different issues, so I think it'll be an interesting year for sure."