A Muslim teenager who says she was kicked out of a northeast Edmonton shoe repair shop for wearing a burka said she forgives the store owner. But 19-year-old Sarii Ghalab said Saturday she hopes that kind of rejection doesn’t happen to others .

‘I truly believe that everyone is good at heart' 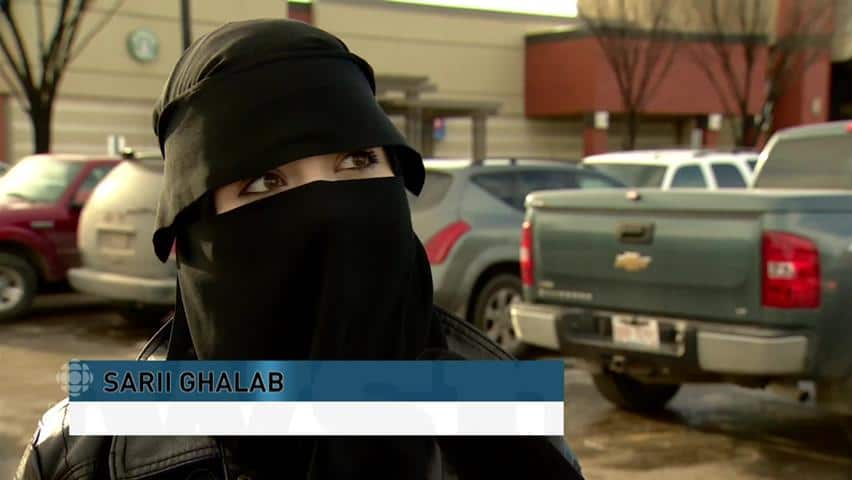 Edmonton Muslim teen describes being kicked out of store

5 years agoVideo
1:27
Sarii Ghalab said she was told to leave an Edmonton shoe store when she came in wearing a burka. 1:27

A Muslim teenager who says she was kicked out of a northeast Edmonton shoe repair shop when wearing a burka said she forgives the store owner.

But 19-year-old Sarii Ghalab said she hopes that kind of rejection doesn't happen to others.

Ghalab said she went with a friend to Edmonton Shoe Repair in Northgate Centre Jan. 27 to fix a broken heel on one of her shoes. She had called two weeks earlier and the shop's owner cheerfully told her it would cost only a few dollars to fix, and that he could do the repair the same day, she said.

When she arrived at the store, a man she believed was the owner asked her to leave.

"He said 'It's not in my ethical beliefs to do business with you,'" Ghalab recalled. "He made it absolutely clear he didn't want me in the store at all."

"I said 'I hope you have a good day' and left. I was so shocked, this had never happened before."

Ghalab wears a burka, a full-length covering worn by some Muslim women that conceals the body with the exception of the eyes. Wearing a black burka that day, as well as a leather jacket and carrying a sparkly purse, Ghalab said she believes she was told to leave because of what she was wearing.

Ghalab's friend, Ijabo Mohamud, said she was surprised to see her friend treated this way in the mall.

"He said 'it goes against my ethics to serve someone who won't show me their face.' That's what he said to her," Mohamud said.

"People don't need to be subjected to this type of response when they're just walking into a shoe store in a mall."

Ghalab said her friend was very upset and told her to complain to the mall's management. Instead, the psychology student decided to write the owner a letter describing how wearing a burka is her way of honouring her ancestors and expressing pride in being Muslim.

This is our identity, our self empowerment, our self expression of who we are.- Sarii Ghalab

She provided a copy of this letter to CBC.

In the letter, she admits she was hurt by the owner's reaction, but asks for compassion in his future encounters with Muslim people.

"If women had the right to wear as little clothes as they desired without people finding it offensive, then I had every right to cover my body as much as I liked without worry either," the letter says.

"Just like it is in my values to dress this way, it is also in my values and beliefs as a Muslim that I respond to what is hurtful with kindness and compassion. Our dress is not because we want to seem mysterious or any of this childish play. But it is because this is our identity, our self empowerment, our self expression of who we are.

"Let's spread and demonstrate acceptance not only for each other, but for our children so that love continues to grow."

Ghalab tried to deliver the letter, along with a bouquet of flowers, to the store owner Saturday afternoon. When she arrived at the store, the same man turned her away a second time and escorted her out of the store. He refused to take the letter and the flowers.

The store's owner, Ryan Vale, spoke to CBC on the phone Saturday morning. He refused to explain his interaction with Ghalab.

When CBC visited his store Saturday afternoon, Vale said he would not comment unless given $5,000 and hotel space to hold a press conference.

But standing in the mall's parking lot holding her letter and the flowers, Ghalab said doesn't want the store's owner to face any penalty for his actions, nor does she want anyone to act out against him in any way.

She just wanted to let him know he had hurt her, she said, and there could be something to learn from the interaction.

"I wanted to show him that: 'You hurt me, you did. You hurt me with what you said, you made me feel like I was inferior… (but) I want to respond to you with love and I want to show you why I'm dressing this way. It's our identity, it's who we are,'" she said.

"Hopefully it can change his perspective. If anything, it would just change how he interacts with future Muslims that enter the store, or future customers that dress how I do."