Mad about magpies: New Edmonton park dedicated to the bird has people squawking

Whether you believe them to be a trash-eating menace that should be eradicated from the landscape or an industrious feathered friend that deserves respect, magpies are an Edmonton icon.

'They're scrappy ... when the going gets cold, they don't get going'

Whether you believe them to be a heartless, trash-eating menace or an industrious feathered friend, magpies are an Edmonton icon.

This mischievous bird is so ubiquitous in Edmonton, it's earned the dubious distinction of being the city's feathered mascot. And the black-billed birds have earned a new place of honour in the city.

The Magpies' Nests art installation, created by Kevin Sehn and Chai Duncan, pays homage to the birds with a series of life-like statues cast in brightly-painted bronze. The $23,000 installation opened in Rossdale Linear Park to little feathered fanfare last fall.

The park, located at 93rd Avenue and 101st Street, sits in front of Edmonton Fire Station Number 21, a facility celebrating a grand re-opening with a community barbecue and public tours this weekend.

Duncan expects his creations to turn some heads and spark conversation.

"People see them as vermin and as pests but they are highly intelligent," Duncan said in an interview from the new community park.

"The inspiration for the project was to try to rehabilitate the reputation of the magpie." 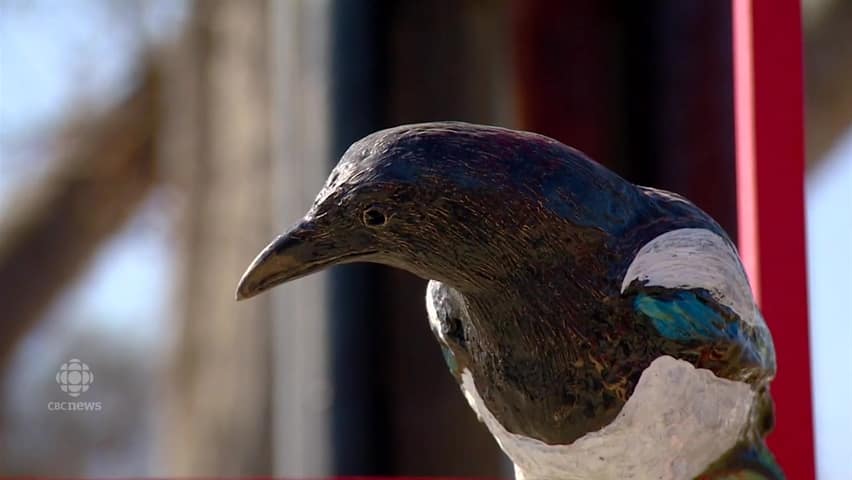 'People see them as vermin and as pests'

1 year ago
2:17
Meet the Edmonton artists looking to rehabilitate the reputation of the magpie with a new public art installation. 2:17

With Edmontonians discovering the park for the first time this spring, CBC morning show Edmonton AM asked listeners to weigh in on the city's unofficial bird.

Edmontonians were keen to get squawking.

"I respect magpies," wrote Scott Seymore on Twitter.  "They're scrappy without being Canada-goose-pissy. When the going gets cold, they don't get going.

"They tough out the Alberta winter. Yes, they're noisy, but they're not nearly as annoying as a crow. And they're actually kind of sharp-looking — nice colouration."

You can't include any mention of magpies on a radio program in Alberta without playing at least some (but preferably all) of Ian Tyson's tribute to the coyotes of the sky: "Oh the west ain't never going to die just so long as you can fly." <a href="https://t.co/LOeoyJ198b">https://t.co/LOeoyJ198b</a>

For many Albertans, magpies are noisy pests known for their unwanted early morning wake-up calls and their tendency to stalk and bully pets.

Edmontonians share the urban landscape with more than 2,000 of them. From guarding a fresh roadkill in a parking lot, to raiding garbage cans, many have experienced close encounters with the bird.

It's clear there is little grey area when it comes to opinions on this black and white creature.

"I used to like magpies, until they systematically attacked the nest that robins have tried to build on my neighbour's front landing the last three years in a row," wrote Lisa Koop.

"Last year they didn't just eat the eggs, they attacked the babies. Boo."

One lovely spring day I was sitting in front of the Mac, enjoying the view. There were baby bunnies in the hedge; so cute! Until I understood that the magpies who were also hopping around in the hedge were working together and HUNTINGthebunnies.Brutal! <a href="https://twitter.com/hashtag/hatemagpies?src=hash&amp;ref_src=twsrc%5Etfw">#hatemagpies</a> <a href="https://twitter.com/hashtag/magpiesbegone?src=hash&amp;ref_src=twsrc%5Etfw">#magpiesbegone</a>

I had one that I would feed my leftover oatmeal before work each day and then on weekends I'd chill with it on the porch while reading. <br><br>Only issue is when there are several dozens of them in a tree right next to your bedroom window screaming.

But for some Edmontonians, the birds are soaring parrots of Alberta — a fine specimen of nature and a reminder of Alberta's industrious spirit.

"They're native to Edmonton," wrote J. Wojtysiak. "They've been here for three or four million years.

"We're the invaders who came in with the garbage and noisy cars and destructive pets, maybe we're the ones that need to become better neighbours to the magpies and not the other way around."

Are you mad about magpies? Love them or hate them, let us know in the comments section below.

And if you still need more magpies in your life, tune into Our Edmonton at 10 a.m. on Saturday and 11 a.m. on Monday on CBC TV.