An Edmonton agency is racing to move into a bigger space so it won't have to send its homeless LGBTQ2s youth back on the streets again this winter.

‘At nighttime there’s hardly any places you can sleep ... You walk the streets or you end up doing drugs' 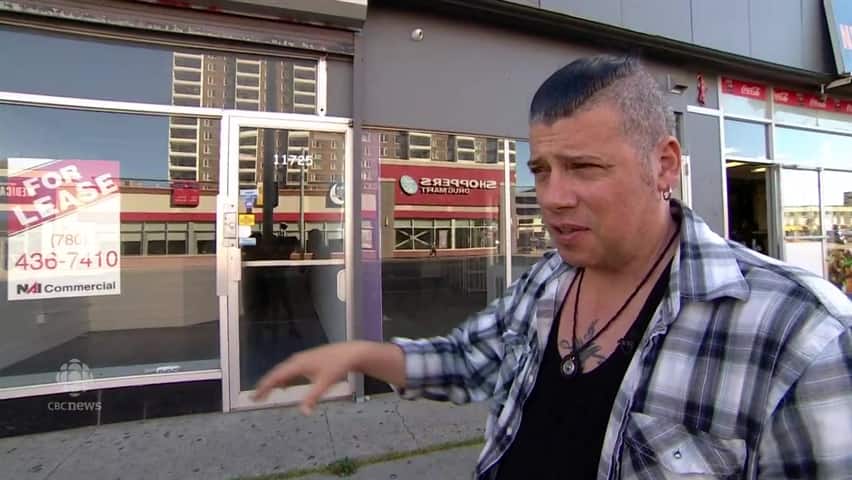 'I had to send them back out on the streets'

1 year agoVideo
2:40
An Edmonton organization that supports LGBTQ2S street youth is raising money to move into a bigger space before winter hits. 2:40

It breaks his heart to send his kids back onto Edmonton's streets on freezing cold nights — but often Corey Wyness has no choice. Even though he knows what happens.

"They have to survive," said Wyness, project coordinator of the community health empowerment and wellness or CHEW, an agency that supports LGBTQ2S youth struggling with homelessness, addiction, mental health issues and sexual exploitation.

"So they will go online and they'll find someone that's looking to pay them or trade ... Unfortunately the market is there. So it's a way for them to get off the street."

Wyness says an informal survey found about 75 per cent of the youth have engaged in some sort of "survival crime" such as sex work or theft.

It's a Thursday afternoon and laughter rings out from the tiny purple office space on Jasper Avenue and 117th Street where Wyness and several youth are piled in. Art and trinkets from thankful clients are proudly displayed while hungry youth can help themselves to bags of chips and chocolate.

Wyness, who is affectionately known among the youth as "The Gay Yoda," often lays down sleeping bags at night or offers a sofa for exhausted youth to catch a few hours of sleep.

Wearing a salt and pepper undercut, a plaid shirt unbuttoned to reveal a tattooed chest, and a frequent smile, Wyness said he works with up to 100 youth ranging from 10 years old to their early 20s. But he figures he's barely scratching the surface of Edmonton's queer street youth in need.

He has a binder with 25 letters written by young people over the past five years — the ones he hasn't been able to stop from taking their own lives.

"These youth don't feel safe anywhere," said Wyness, whose agency runs on a shoestring budget funded by private fundraising and money from Children's Services. "There's no frontline service provision usually anywhere else that's directly for them and so they don't have any place to go.

"If you're a trans youth and you're visibly trans or you're a queer youth and visibly queer in any way you get bullied, you get beat up, you get named called at the shelters and that's just the reality of it, is the level of homophobia and transphobia is so high there.

But now Wyness has a chance to offer the youth a safe place to sleep at the location right next door with a red and white for lease sign in the window.

At 1700 square feet, it's six times larger and would also have showers, laundry, a kitchen and common areas to relax and socialize.

Wyness and his crew need to raise $25,000 in an online campaign on top of the $15,000 already raised. The goal is to get into the new place before the youth are forced to spend another winter on the streets.

"This is going to be a spot where it could be home for these youth," he said.

"We have a community kitchen where grandmas and kokums are going to come in and cook dinner with the youth and sit down and have food, like real food. And so we're creating a street family because a lot of these youth don't have families. They've been kicked out of their homes or kinship care or come off the reserve or are newcomers and get kicked out of their homes.

"So they've lost that family and so part of what we want to do is create that family environment again."

It's something that appeals to James Desjarlais, a two-spirit 26 year old who was homeless for more than a decade after losing his placement in foster care.

He walked from Wetaskiwin to Edmonton but when he was banned from different shelters, Desjarlais took refuge in bushes, staircases and parkades.

"At nighttime, there's hardly any places you can sleep," said Desjarlais. "What do you do? You walk the streets or you end up doing drugs."

At nighttime there's hardly any places you can sleep.What do you do? You walk the streets or you end up doing drugs- James Desjarlais

But thanks to CHEW, says Desjarlais, he has made friends and found the guidance he needs as well as a safe place, where he can be himself.

With CHEW's support, Desjarlais is now working to get off the streets. He wants more LGBTQ2S homeless youth to have the same opportunity to succeed.

"Corey went through all of it. He's one of the few that did not give up on me," Desjarlais said.

"They just want to know how I'm doing, what they can do to help me and it's just a wonderful feeling knowing that somebody's actually spending their time worrying about what you need done — IDs, clothing, maybe a little place to rest for a little bit.

They're helping me become a better me."

It's a sentiment echoed by Connor Sims, 26, who was banned from his Red Deer church after coming out in his early teens. It sent him on a downward spiral that led to a methamphetamine and crack habit he supported by prostitution.

With the help of CHEW, Sims has left hard drugs and sex work behind. Instead, he's giving back to the agencies that helped him. Last month he co-created, cast, directed and performed in a drag show, Night of 1000 RuPauls. The money was donated to programming for at-risk youth at the Old Strathcona Youth Society.

"They really they saved me because Corey is probably the most nonjudgmental worker that works with young people that I have ever met," Sims said. "He just he makes you feel like you have a sense of belonging."