Edmonton's first Indigenous artist in residence will be telling the stories of what shaped the city in her closing exhibit, which will be displayed inside City Hall. 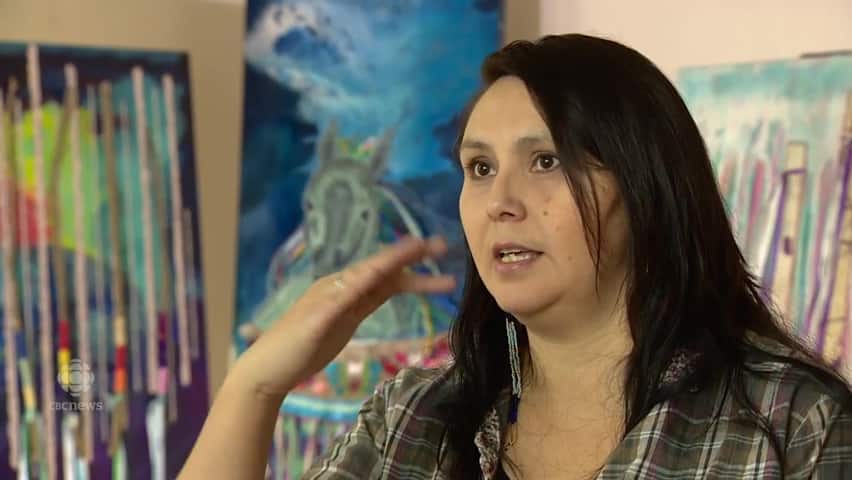 Hints hidden in the art of Dawn Marie Marchand

3 years agoVideo
2:17
The Cree Métis artist reflects on the work done during her year as the City of Edmonton’s Indigenous artist in residence. 2:17

Every piece of art in Dawn Marie Marchand's final exhibit carries a hint to remind everyone they're in Treaty 6 territory.

Sometimes, it might be something as subtle as six shades of paint.

But Marchand hopes people will look closer at each piece to unearth the stories inside.

"That's why I like art, because it's like unravelling an onion," Marchand said. "You can actually see so many things if you spend the time."

To mark the end of her year as Edmonton's first Indigenous artist in residence, Marchand is showcasing some of her work in a final exhibit at City Hall.

"I'm telling a little bit about the Indigenous history of Edmonton," she said. "Things that maybe people aren't aware of that they should think about a little bit."

The Cree Métis mixed media artist has lost count of the number of paintings she has done in the past year. She will display about 15 of them in her closing exhibit.

Marchand wants people who look at her work to appreciate the beauty she feels, as well as the message it holds about, she said, "the things that created and shaped the people that we are here today in Edmonton Treaty 6 territory."

Part of the story she's telling is about how the treaties were supposed to bring mutual abundance before the Indian act "threw things off kilter."

Being the first Indigenous artist in residence is a job she has loved but one that also came with a heavy workload of countless media interviews and requests, on top of the artwork.

Nonetheless, she's proud of what she has accomplished in the role.

Especially the fact that she helped create opportunities for other Indigenous artists to get their work seen by larger audiences.

"If I didn't make room for other artists, I would not have done my job," she said.

As part of her goal, Marchand organized an Indigenous artists meet-and-greet early in her tenure.

The event brought together more than 60 artists with more than 200 business owners and others in the community.

"There was a lot of follow up," she said. "Jobs, opportunities and contracts were given out."

The September national gathering of elders event in Edmonton saw her curate an exhibit featuring the work of 16 artists.

Many had never been a part of an exhibit before. The show allowed their work to be seen by thousands of people.

Over the course of the last 16 months, Marchand has completed work to try to spark conversations about some painful topics, such as colonialism and the Missing and Murdered Indigenous Women and Girls inquiry.

Despite of the uncomfortable nature of some issues, she has always felt encouraged and supported by her employer.

"Kudos to the City of Edmonton, because they stuck with me through it all," she said. "And that's pretty exciting."

Marchand's appointment was a pilot project for one year but the city is already committed to continuing with the position.

"It was really refreshing to have her be able to amplify the voice of what an Indigenous woman, an Indigenous artist, is seeing and observing in today's society," said Mike Chow, director of Edmonton's Indigenous relations office.

With a vision to build on the work Marchand has started, Chow said the city will make another open call for artists to apply for the job.

Marchand to work as mentor for her successor

Knowing that a number of artists are poor, and some are possibly homeless, the city is keen to make the application process as simple as possible.

"We know that we have to develop some kind of transparent open call that doesn't intimidate or create barriers for the artist that maybe isn't on the more polished end of the spectrum," said Chow.

It's expected the call will go out later this year, with a hope an artist could be in place by next spring.

Whoever gets the job can count on Marchand's mentorship.

She doesn't have a name for her final exhibit yet, which will be on display at City Hall from Nov. 6 to Nov. 20.